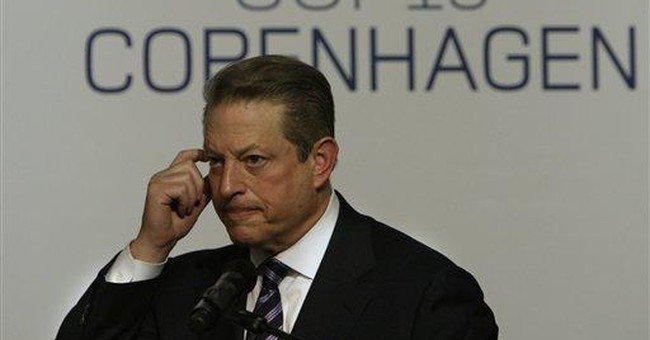 The 15th UN climate change conference began in Copenhagen last Monday, continuing through the end of this week. It is estimated that 15,000 participants from 192 countries are attending. The conference is the result of two years of international talks, and is intended to produce a binding treaty to cut global carbon emissions. The 1997 international Kyoto Protocol currently in place requiring substantial reductions in carbon emissions expires in 2012. The Copenhagen treaty is supposed to be more stringent than Kyoto, establishing a ceiling for global warming. The 124 countries that signed the Kyoto Protocol and complied with it have agreed that ceiling should be an increase of no more than 2 degrees Celsius (3.6 degrees Fahrenheit) by 2050. A cap and trade agreement is also in the plans.

Due to the contentious debate over global warming and the heavy price participating economically advanced countries will be forced to pay, insiders predict the conference will only result in general guidelines and principals, not a binding treaty. A binding treaty will likely be tabled for another try next year. “Climate-gate,” the leak of emails from climate scientists revealing they had hidden evidence contradicting manmade global warming, no doubt played a substantial role derailing the possibility of a firm treaty. The emails implicated several scientists who helped draft the UN’s 2007 global warming report, which has been frequently cited as “unequivocal” evidence of a global warming crisis. This report, the Intergovernmental Panel on Climate Change (IPCC) 2007 Fourth Assessment Report, is what prompted political efforts leading up to the Copenhagen conference.

The leaked emails revealed that scientists hid temperature data, withheld it from public records requests, manipulated data, and deleted emails to cover their fraudulent efforts. They prevented dissenting views from being published in peer-reviewed journals, and used computer models to inflate warming trends. When a scientific journal published a study skeptical of manmade global warming, one scientist suggested retribution by boycotting the journal. The chairman of the IPCC and one of the conference leaders, Nobel lauriate Rajendra Pachari, refused to acknowledge the significance of the leaked emails, saying they would have “absolutely no impact” on the conference agenda.

Evidence that manmade greenhouse gases cause global warming is lacking. Although the world's production of greenhouse gases has been increasing, temperatures are decreasing. Temperatures have not risen over the past 10 years as predicted, in fact they began cooling at a rate of 7.3 degrees F, according to data from the U.S. National Climate Data Center. During 2008-2009, the Antarctic region had the lowest level of snow melting in 30 years. 97% of the Antarctic has been cooling since the mid-1960’s.

William Gray, an emeritus professor of atmospheric science at Colorado State University, who is dubbed the “World’s Most Famous Hurricane Expert” by the Washington Post, says there has yet to be an “honest and broad” scientific debate on the influence of CO2 on global temperature. According to Gray, who believes that global warming is the biggest hoax ever perpetuated on the American people, the decrease in CO2 being proposed at Copenhagen “would cause very large increases in our energy costs, a lowering of our standard of living, and do nothing of significance to improve our climate.” Gray says the 1 degree F increase in the earth's temperature over the past century is due to multi-century changes in the earth’s deep ocean circulation. The temperature increase is cyclical; the earth is coming out of a Little Ice Age, and entering a warmer stage similar to the Medieval period.

The full absurdity of the global warming hype can be found in a 2006 UN report which claimed that herds of cattle pose the greatest threat to the climate, forests and wildlife, primarily due to their burping and farting, which emit methane gas. This conclusion can only be reached by accepting the premise that the earth can turn on itself and destroy itself this way. There are no manmade carbon emissions involved here. The only way to “resolve” this “problem” is to produce less cattle for food – thus achieving the two far left wing agendas of reducing the population and eating less meat.

The Kyoto Protocol was generally ignored by the U.S., China, India and Japan. The Senate refused to ratify the Kyoto Protocol in 1997 because it contained no binding demands on developing nations to cut their emissions. Considering the U.S. emits 20% of all green house gases, more than any other country except China, which will not agree to any severe cuts, the U.S. stands to lose the most from a Copenhagen treaty. Agreeing to drastically cut greenhouse emissions will effect profound changes to energy, transport, and manufacturing sectors. Energy costs will increase. It will cost money and jobs. The U.S. will become less competitive economically, since many countries will opt out of complying. More U.S. jobs will relocate overseas, especially to India and China which have indicated they will not comply with any new treaty. The U.S. and other economically richer countries are offering to reduce emissions by 8-12%. But the IPCC wants reductions of 25-40%.

Perhaps the most important question that needs to be asked is why do so many scientists support the notion of manmade global warming, to the point that some are falsifying the data? Most likely it is because their funding is contingent upon promoting that viewpoint. Scientists work off of government grants, which are politically driven. It is conceivable that most climate related grants are only available for research that supports the concept of manmade global warming.

It is disturbing that politics is driving scientific research, instead of the other way around. Science is being relegated to little use other than a political tool to be manipulated to justify policy. Sarah Palin summed it up best, “Policy should be based on sound science, not politics.” Until politics can be removed from science, global warming alarmists will continue to scare people into believing their propaganda. Hopefully cooler heads will prevail this week at Copenhagen, averting what Rep. James Sensenbrenner refers to as “scientific fascism.”