Democrats Try to Lock Up Their Base 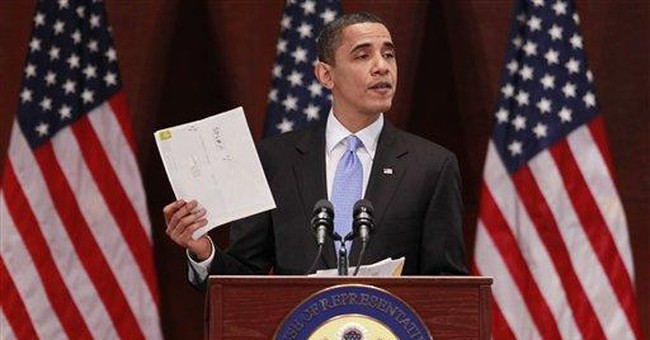 "You have to decide what your goals are." That's what the Democratic staffer who wrote the marriage penalty into Obama's health control law told a Wall Street Journal reporter.

Indeed, the Democrats and their feminist allies have decided on one of their major goals. It is to increase the number of single moms by increasing the flow of taxpayer-paid incentives that subsidize the non-marriage lifestyle.

The plan also includes locking in this group's dependence on government and allegiance to the Democratic Party. The plan is conveniently set forth in a 60-page document called "Advancing the Economic Security of Unmarried Women" just published by John Podesta's left-wing think tank called Center for American Progress.

The Democrats know that 70 percent of unmarried women voted for Barack Obama in the 2008 election. It's obviously part their political game plan to reward that group and keep it in the Obama column.

The feminists, who have always been anti-marriage and very anti-full-time-homemaker, consider it progress that women are now half the workforce and are major breadwinners for their children. As chief feminist Ruth Bader Ginsburg wrote in her 1977 tax-funded book "Sex Bias in the U.S. Code," the concept of breadwinning husband and homemaking wife "must be eliminated."

When the husband-breadwinner is eliminated, single moms look to Big Brother Government as provider. Democrats are glad to claim credit for facilitating the taxpayer subsidies.

The Podesta opus sets the stage for the Democrats' legislative proposals by asserting that our definition of family is "outdated, stuck in the 1950s notion of a nuclear family that excludes too many of today's nontraditional families." Redefining the word family has been a feminist goal ever since Gloria Steinem persuaded President Jimmy Carter to change the name of his White House Conference on "the Family" to "Families."

The Podesta document sets forth 83 pieces of congressional legislation that will funnel taxpayers' money to unmarried women. You can get the flavor and the message from the cutesy titles.

The Hiring Incentives to Restore Employment (HIRE) Act would "particularly benefit" unmarried women because women hold three-quarters of jobs in the education and health services industry. The Unemployment Insurance Modernization Act would require expansion in eligibility and benefits to help women.

The Paycheck Fairness Act would "improve" the 1963 Equal Pay Act based on the falsehood that "women workers earn 77 cents for every dollar a comparable man makes." The Employment Non-Discrimination Act (ENDA) would benefit lesbian and bisexual women.

The Living American Wage Act and the Working for Adequate Gains for Employment in Services (WAGES) Act would improve the pay of "traditionally female jobs" in childcare, early childhood education and health care. The Pathways Advancing Career Training (PACT) Act and the Strengthening Employment Clusters to Organize Regional Success (SECTORS) Act would give funding to states to provide training for and access to nontraditional high-wage jobs and careers for women.

The Family Income to Respond to Significant Transitions (FIRST) Act and the Federal Employees Paid Parental Leave (FEPPLA) Act would give women paid family leave. The Healthy Families Act would require employers to provide paid sick days, which the document says would help women because "women are disproportionately affected" by not having paid sick days.

The Domestic Violence Leave Act and the Security and Financial Empowerment (SAFE) Act would make women eligible for leave for a variety of problems connected with alleged domestic violence.

The Starting Early, Starting Right Act would provide "high-quality" daycare. The Right Start Child Care and Education Act, the Helping Families Afford to Work Act and the Balancing Act are all designed to provide cash and services to single moms.

The Earned Income Tax Credit is already worth up to $5,657 for a single parent with custody of three children. The Podesta report failed to mention that the Government Accountability Office reported that the IRS estimates that between 27 percent and 32 percent of EITC dollars are collected fraudulently.

The Democratic Congress repealed the essence of Republican welfare reform last year by providing bonuses to states that increase their spending on Temporary Assistance for Needy Families (TANF). Single moms make up 90 percent of TANF recipients.

Even if all these 83 bills don't pass, plus others that give health care, housing and retirement subsidies, they illustrate the worldview of Obama Democrats and feminists. The bills also demonstrate how welfare, which was started by Lyndon Johnson primarily to help widows with young children, has in the hands of government ballooned into a spending monster.