Obama Panders to the Feminists 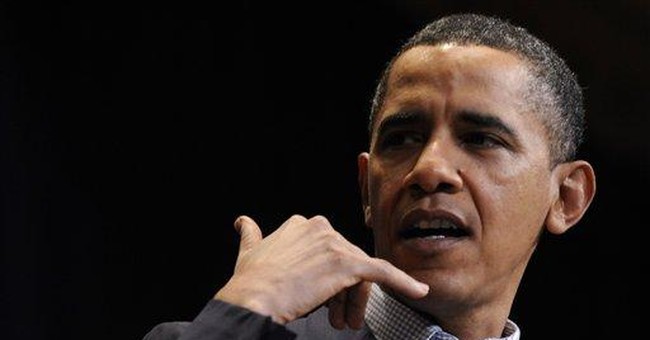 Barack Obama's "spread the wealth around" doesn't mean only higher taxes on taxpayers and more handouts to non-taxpayers. More especially, it means transfers of financial goodies to the president's political allies.

The American people were rightfully outraged when it became known that Sens. Mary Landrieu and Ben Nelson were rewarded for voting for Obamacare with hundreds of thousands of dollars of benefits given uniquely to their states, Louisiana and Nebraska. Now we find that President Obama is paying off the feminists big-time for their support of his election.

When Obama presented his multitrillion dollar budget, he declared with great fanfare that he was calling for a freeze in discretionary spending. Feminists immediately had a tantrum to complain that the freeze exempted funding for the military, intelligence and homeland security.

Now we learn that all feminist programs and organizations will also be exempted from the freeze. Instead, they will get what White House spokesman Kate Bedingfield admits are "significant funding increases."

A White House document titled "Opportunity and Progress for Women and Girls" describes 15 federal programs that will receive increased funding to appease the feminists. Chief among them is the Violence Against Women project, which is targeted for a 22 percent increase, an extra $117 million more than current funding, which is already close to $1 billion a year.

That earmark is a Joe Biden project known as feminist pork because the money goes right into the hands of radical feminist centers where they teach their anti-male, anti-marriage ideology, counsel women to get divorces and urge criminal prosecution against a man no matter how slight or unverified the alleged offense.

The "Women and Girls" document reveals that Obama's budget would appropriate $50 million to give grants to incentivize the states to adopt paid family leave. That longtime feminist goal would be very costly to small business and result in a loss of jobs.

To please the feminists, other spending that will be exempted from Obama's freeze includes an additional $400 million for the discretionary nutrition program for low-income women and an increase of $10 million for family planning.

Of course, Obama's budget will increase funding for daycare, one of the most favorite feminist objectives. Head Start, which already receives $9 billion a year, is scheduled for additional funding of nearly $1 billion, despite the fact that recent studies show that Head Start provides little or no beneficial results toward the stated goal of helping disadvantaged children catch up with other children.

Obama's budget also provides an additional $1.6 billion for the Child Care and Development Fund as part of the reauthorization of government spending for daycare. The feminists believe that childcare should be taken over by government in order to overcome society's expectation that mothers should care for their own babies.

Obama's State of the Union speech continued his pandering to the feminists. He said, "We are going to crack down on violations of equal-pay laws so that women get equal pay for an equal day's work." Equal pay for equal work has been U.S. law since 1963, so there's nothing new about the law or its enforcement. Isn't his Equal Employment Opportunity (EEOC) agency already cracking down against violations -- and if not, why not?

Obama's statement was just a throw-away line to feed the feminist myth that women are victims of employment discrimination. It was also designed to try to validate the false feminist slogan that women are paid only 77 cents for work that earns a dollar for men.

That's not true because equal pay ought to be paid for equal work, and most women don't work as many hours or in as dangerous or unpleasant jobs as men. Women prefer inside work in air-conditioned offices.

Obama hasn't yet gone as far as Norway, which passed a law requiring that women must comprise 40 percent of all companies' corporate boards. U.S. feminists probably would like that rule -- they pretend to see no hypocrisy in touting gender-neutrality while demanding affirmative action for females.

Rush Limbaugh got it right when he commented on Obama's State of the Union speech as "from the 1970s ... totally cliched." Half of American women are in the workforce today, while male unemployment is setting new records.