Why Kids Don't Do Well in School 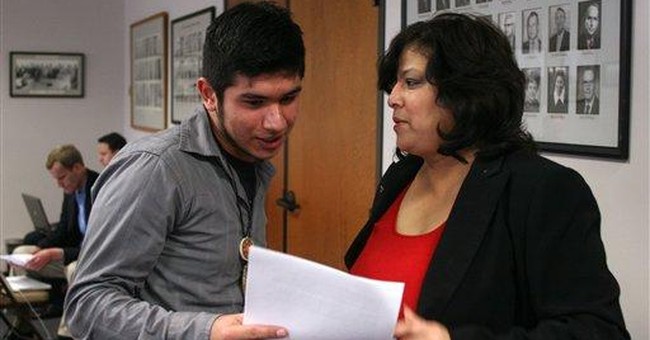 Let me share with you an interesting article from The Washington Post about the teacher of an all-black class in a high school in Alexandria, Va., who expressed his frustration at how poorly the students were performing. The class included both native-born African-Americans and kids who had emigrated from Africa.

In a moment of exasperation, the teacher blurted out this question to the native-born students: "Why don't you guys study like the kids from Africa?" One of them shot back the answer.

The kid replied, "It's because they have fathers who kick their butts and make them study." Another student called out, "Ask the class, just ask how many of us have our fathers living with us."

The teacher did ask the class, and not one hand went up. The students had figured out, even if schoolteachers and administrators are still in the dark, that the essential difference between kids who make it in school and those who don't is whether they have their father in the home.

It isn't a matter of race -- the African-Americans and the Africans are the same race. It isn't because the school doesn't have enough money -- this school has so much money that it gives every student a laptop of his own.

For the majority of them, the reason is the liberal welfare system, which transformed the people who were given "free" money called "welfare" into a society of single moms. In this matriarchy, fathers were made unnecessary -- even an impediment to the flow of taxpayer handouts.

Now we see the terrible consequences of what Daniel Patrick Moynihan famously predicted in 1965 when Lyndon Johnson started his Great Society spending. Welfare reform was passed in 1996 and even signed by Bill Clinton, but President Obama had those reforms repealed in his stimulus bill last year.

The anti-marriage feminists are unwilling to fault the matriarchal society, and so the academic feminists keep looking for other causes of poor grades by minority students. An outfit called the Race, Culture, Class and Gender Task Group is trying to get the University of Minnesota to make race, class and gender the "overarching framework" of all teacher education coursework.

This busybody task group is part of the university's Teacher Education Redesign Initiative, which is premised on the notion that Minnesota teachers' lack of "cultural competence" contributes to the poor academic performance of minority students. The plan would require teachers to be re-educated so they will teach Minnesota minority kids that America is an oppressive, racist, sexist, homophobic country.

According to the final report of the Race, Culture, Class and Gender Task Group last year, in order to effectively teach a diverse class of students, teachers must understand how "white privilege, hegemonic masculinity, heteronormativity, and internalized oppression" have impacted their thinking.

The report demands that teachers be trained to instruct students on the U.S. "myth of meritocracy," the "history of white racism" and "demands for assimilation to white, middle-class, Christian meanings and values."

This task group even has plans to browbeat into submission those who don't accept these new liberal dictates. The group calls on the university to develop "a remediation plan" for non-performing students and teachers.

Such outlandish proposals have not gone unnoticed. The Foundation for Individual Rights in Education (FIRE) accuses these re-education plans of violating "the freedom of conscience of the university's students," and the American Council of Trustees and Alumni (ACTA) charges that these plans "ignore academic goals and lead to a politicized determination of who is qualified to be a teacher."

The University of Minnesota may pretend to back off from the more outrageous of these proposals, but they are totally in sync with William Ayers' "social justice" teaching and the more recent buzz word "cultural competence." The bottom line is to teach the younger generation that they are victims of an oppressive and unjust America, and that they should organize and demonstrate (a la Saul Alinsky) to take power and money away from those who have those things.

Another ominous straw in the wind is Obama's appointment of six way-out radicals to the National Advisory Committee on Institutional Quality and Integrity (NACIQI), whose mission is to evaluate whether accrediting agencies are properly assessing the quality of colleges and universities. The appointees are the sort of Obama extremists who will be likely to try to enforce diversity mandates and social engineering on institutions seeking accreditation.

The most important thing schools should do for minority (and other) schoolchildren is to teach them how to read by phonics in the first grade. They could do this inexpensively with my "First Reader" (www.firstreader.com) -- and if the schools refuse, this book is the perfect tool for parents to teach their own children.