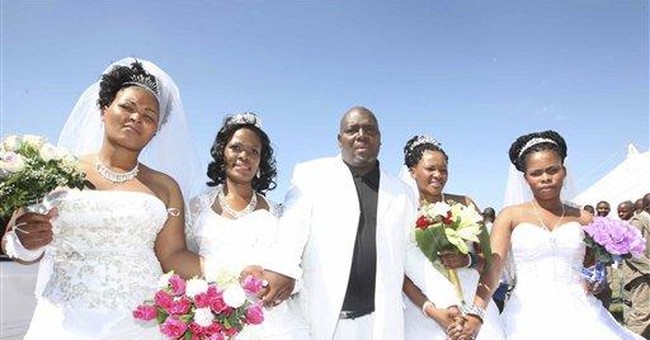 No sooner had we celebrated the exit of Barack Obama's green jobs czar, Van Jones, because of his Communist connections, another off-the-wall administration embarrassment surfaced. President Obama nominated for commissioner of the Equal Employment Opportunity Commission (EEOC) a woman who signed a radical manifesto endorsing polygamy.

We thought our nation had settled the polygamy issue a century and a half ago, but this nomination makes it a 21st century controversy. Obama's nominee for the EEOC, a lesbian law-school professor named Chai R. Feldblum, signed a 2006 manifesto endorsing polygamous households (i.e., "in which there is more than one conjugal partner").

This document, titled "Beyond Same-Sex Marriage: A New Strategic Vision for All Our Families & Relationships," argues that traditional marriage "should not be legally and economically privileged above all others." The American people obviously think otherwise, and current laws reflect our wishes.

Feldblum is not the only pro-polygamy Obama appointee. His regulatory czar, Cass Sunstein, wrote a book in 2008 called "Nudge: Improving Decisions About Health, Wealth and Happiness," in which he urged that "the word marriage would no longer appear in any laws, and marriage licenses would no longer be offered or recognized by any level of government."

Sunstein argues that traditional marriage discriminates against single people by imposing "serious economic and material disadvantages." He asks, "Why not leave people's relationships to their own choices, subject to the judgments of private organizations, religious and otherwise?"

Sunstein also suggests "routine removal" of human organs because "the state owns the rights to body parts of people who are dead or in certain hopeless conditions, and it can remove their organs without asking anyone's permission."

The Defense of Marriage Act (DOMA) was passed in 1996 by overwhelming majorities in Congress and signed by President Bill Clinton. The Government Accountability Office (GAO) has identified more than 1,000 federal laws that are based on the traditional definition of marriage, including the tax laws that permit married couples the advantage of filing joint income tax returns and the Social Security benefits awarded to fulltime homemakers, both very popular federal laws.

The peculiar push to recognize polygamy as just another variety of marriage is a predictable and logical corollary of the political movement to recognize same-sex marriage. If our government cannot define marriage as the union of one man and one woman, it follows that there can be no law against the union of a man and several women.

For years, polygamy, even though it is totally demeaning to women, has been embraced by the powerful American Civil Liberties Union (ACLU). Polygamy is one of the many controversial issues that were not raised during ACLU lawyer Ruth Bader Ginsburg's so-friendly Supreme Court confirmation hearings.

The ACLU's feminist president, Nadine Strossen, stated in a speech at Yale University in June 2005 that the ACLU defends "the right of individuals to engage in polygamy." On Oct. 15, 2006, in a high-profile debate against Supreme Court Justice Antonin Scalia, Strossen stated that the ACLU supports the right to polygamy.

Speaking to the Federalist Society on Nov. 18, 2006, the ACLU's executive director, Anthony Romero, confirmed his organization's support of polygamy.

The massive immigration that the United States has accepted in recent years includes large numbers of immigrants from Third World countries that approve of polygamy as well as marriage to children and to close relatives. We wonder if polygamists have been admitted to the United States and if they are continuing these customs in U.S. neighborhoods.

Attacks on the traditional legal definition of marriage come from the gay lobby seeking social recognition of their lifestyle, from the anti-marriage feminists and from some libertarians who believe marriage should be merely a private affair, none of the government's business. These libertarians want to deny government the right to define marriage, set its standards or issue marriage licenses.

Government now has and should have a very important role in defining who may get a license to marry. In America, it is and should be a criminal offense to marry more than one person at a time, or marry a child or a close relative, even though such practices are common in some foreign countries.

In socialist Canada, which has already approved same-sex marriage, polygamy has suddenly become a live issue. British Columbia's Supreme Court is now being asked to decide if polygamy should remain illegal.

We may have to depend on the Republican Party to maintain government's proper role in defining and protecting traditional marriage. The very first platform adopted by the Republican Party, in 1856, condemned polygamy and slavery as the "twin relics of barbarism," and the 2008 Republican platform calls for "a constitutional amendment that fully protects marriage as a union of a man and a woman, so that judges cannot make other arrangements equivalent to it."