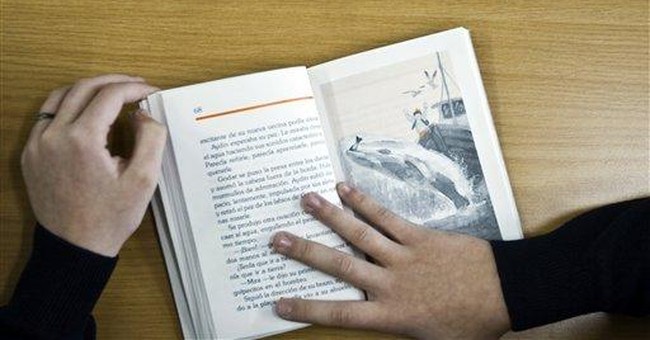 A recent survey of Britons under the age of 20 reported that more than 20 percent of them believe Winston Churchill, Richard the Lion-Hearted and Florence Nightingale were fictional characters, but that Robin Hood, Sherlock Holmes and King Arthur were real people.

We hope American students are more knowledgeable, but evidence is not reassuring. They scored an F, or just 54 percent, in a new survey by the Intercollegiate Studies Institute of 14,000 freshmen at 50 U.S. colleges and universities.

Students were asked 60 questions to test their knowledge of U.S. history and government. In general, the better a college ranked on the widely publicized U.S. News & World Report list, the lower it ranked on civic learning.

Another just-released survey found that a significant proportion of U.S. teenagers live in "stunning ignorance" of history and literature. That survey was conducted by a new research organization called Common Core.

An earlier survey of college seniors at 50 top colleges conducted by the American Council of Trustees and Alumni found that more than half didn't know that George Washington was the commanding general of the Continental Army during the American Revolution who accepted Cornwallis's surrender at Yorktown. Some 36 percent thought it was Ulysses S. Grant, and 6 percent said it was Douglas MacArthur.

Fortunately, two important new books now tell 20th century history the way it really happened, instead of the way liberals and feminists wish it had happened. Every college student should read these books in order to learn history that colleges fail to teach.

Both books describe how Ronald Reagan-style conservatism replaced New Deal liberalism during the half century following World War II, an event of great magnitude and good fortune for America. The first of these new books was written by a historian, the second from the view of participants in historic events.

"The Conservative Ascendancy: How the GOP Right Made Political History" (Harvard University Press, $28) is the work of historian Donald T. Critchlow. It is the indispensable scholarly account of how a small unorganized band of writers and an equally unorganized collection of grass-roots activists launched a counteroffensive against the prevailing economic and political order of the 1930s and 1940s, and by the 1980s became the dominant force in U.S. politics.

Long after President Franklin D. Roosevelt was gone, conventional wisdom still considered his New Deal liberalism to be the wave of the future. Conservatives were believed to be an ineffective remnant waging a holding action against inevitable socialism.

Critchlow traces the travails of the conservative movement through the political battles involving Sen. Robert A. Taft, Sen. Barry Goldwater, President Richard Nixon and President Gerald Ford, all Republicans. Those who lived through those years will delight in the extraordinary detail produced by Critchlow's extensive research and his more than 500 footnotes, and those too young to remember will learn history they cannot get anywhere else.

Conservatives found their leader in Reagan, who fortified their resolve with his faith that the tide of history is moving in our direction and that it is morning in America. Critchlow skillfully shows how the Reagan victories of the 1980s depended on a coalition of fiscal conservatives left over from the 1964 Goldwater campaign, the alumni of the anti-Communist groups that had educated the grass roots about external and internal threats to our country, and the social conservatives who newly came into the political process in the campaigns against the Equal Rights Amendment and Roe v. Wade.

"Upstream: The Ascendance of American Conservatism" (Simon & Schuster, $26) by Alfred S. Regnery is a fascinating account of how conservative authors combined with conservative activists to shake off New Deal socialism of the 1930s and become the dominant ideology in America. As the author boasts, "We are all conservatives now."

Regnery's book leads us to know and understand dozens of conservative leaders from various walks of life, volunteer organizations that played a role in the movement, mail-order fundraising, and foundations. He puts the broad scope of the conservative movement in focus, including the importance that the courts play in our culture.

Regnery's book is based not only on his firsthand involvement with many icons of the conservative movement, but his face-to-face interviews with many who are still living and able to tell their stories.

Regnery ends his book by describing the unexpected conservative uprising (all the way from Bill Kristol to Pat Buchanan) against President George W. Bush's nomination of Harriet Miers to the U.S. Supreme Court. No doubt the author hopes that the success of that revolt shows that conservatives are still moving "upstream" and can maintain their identity apart from liberal-Republican and Bush mistakes.

Here's How You Know Democrats Rigged and Stole the 2020 Election
Townhall
Dr. Fauci shifts the goalposts yet again, this time to another field in a different state
Twitchy
Can We Put Pelosi out to Pasture Already for What She Just Did to Willie Mays?
Redstate
Canadian Pastor Swarmed and Arrested by 'SWAT' Team for 'Inciting' People to Attend Church
PJ Media