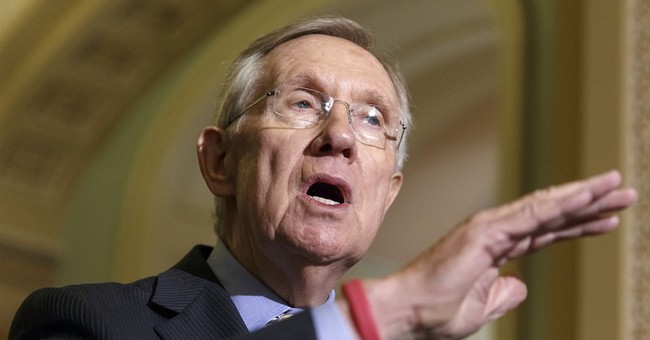 The filibuster is dead for nominees and is living-dead for legislation; it exists, but under the precedent set by Harry Reid and Senate Democrats last year, it could be eliminated any time the majority wishes. Democrats are almost certain to do so next time they control the House of Representatives, so Republicans should go ahead and kill off the filibuster for good on day one.

When Harry Reid broke the Senate rules to torpedo the filibuster for appointees last year, Republicans howled in protest. Both sides made arguments that sounded principled, but really advanced their own partisan interests - we know that because less than a decade earlier an almost identical debate occurred, and in the interim is appeared Republicans and Democrats had traded scripts.

Harry Reid said winning that fight was "the most important thing I ever worked on" about the 2005 fight, when Reid was the filibuster's most vocal defender with florid praise about the Founders and the Constitution. When he was asked if the Senate would ever consider such a move again, Reid said: "As long as I'm the leader, the answer is no." But as soon as he had a Democratic president and a Democratic majority he did a backflip on the issue.

The result? The federal judiciary is now stacked with liberal activist judges who have seized control of ever larger areas of public policy. Reid's power grab means there is a vestigial filibuster for Supreme Court nominees and for legislation, but it now exists solely at the pleasure of the majority, which can at any time invoke Reid's procedure to change the rules and end the filibuster completely.

Therefore every bill that is "blocked" by filibuster fails only with the tacit agreement of the majority not to change the rule. Thus the Senate has already been transformed into a simple majority-rule body. Retiring Democrat Carl Levin, one of just three Democrats who voted against Reid's rules change, said this at the time:

"Let us not kid ourselves. The fact that we changed the rules today just to apply to judges and executive nominations does not mean the same precedent won't be used tomorrow or the next year or the year after to provide for the end of a filibuster on legislation, on bills that are before us, and on amendments."

He was exactly right. It is inevitable. So do it now.

Bills that land on the president's desk will command the attention of media and the people - even if vetoed - in a way bills that die a quiet death by filibuster will not. And many will be so popular that President Obama will feel compelled to sign them, as President Clinton signed welfare reform only after vetoing it twice.

If Republicans do not kill the filibuster, on the other hand, they may quickly retreat from even attempting major legislation using Democratic obstructionism as an excuse for continued gridlock.

It's a bad excuse. The filibuster is already dead, even if not yet officially. So put it out of its misery on day one and get busy with the serious work of shrinking government.
It Sure Looks Like CBS News Edited Body Cam Footage to Omit a Key Frame in Adam Toledo Shooting
Matt Vespa
Kamala Harris' Niece Calls for Defunding Police, While White House Throws Officer Under the Bus
Rebecca Downs
Biden Administration Rescinds Ban on Using Aborted Fetal Parts for Research
Rebecca Downs
'Where the Hell is Joe Biden?': VP Harris Welcomes the Prime Minister of Japan
Katie Pavlich
Far Left Forces Biden to Cave on a Trump Immigration Initiative, Which Only Shows It Was a Good Policy
Matt Vespa
Unlike Fauci, Ron DeSantis Had a Scientifically-Accurate Take on COVID Vaccinations
Matt Vespa