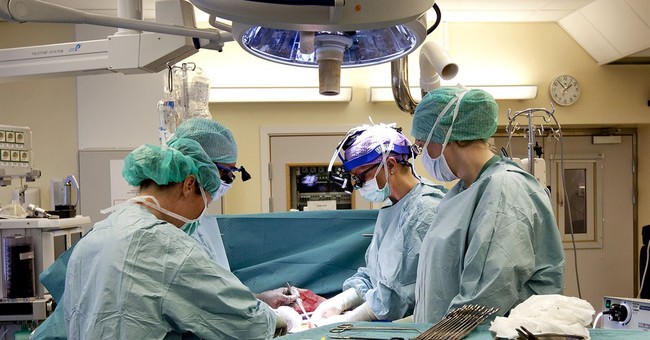 The big health insurance companies played a high-stakes double game throughout the 2009 health care fight, funding attacks on the so-called public option – an explicitly government-run competitor – while otherwise supporting the central elements of the bill that ultimately passed: vast taxpayer-funded subsidies flowing to their potential customers and a mandate requiring every American to buy their products. Yet the law is becoming such a disaster that the insurers stand to take losses in the new exchanges – losses that will largely be passed on to taxpayers under a provision called Risk Corridors.

Risk Corridors are a de facto bailout built into the structure of the law. As written and originally explained the provision would have smoothed out pricing risk by taking funds from insurers who made excess profits and transferring them to insurers who take losses. This was supposed to prevent companies from marketing specifically to healthier segments of the population and instead give them an incentive to simply enroll as many people as possible.

But with the exchanges overall failing to attract enough healthy people, nearly every insurer is now expected to be in a loss position on their exchange plans, making the Risk Corridors a transfer not between companies but instead a direct pipeline of tax dollars from the U.S. Treasury to the coffers of insurers. As if the law’s massive subsidized and mandated demand weren’t enough.

Moody’s recently downgraded the insurance companies to a negative outlook, citing “the ongoing unstable and evolving environment” and “new regulations and announcements that impose operational changes well after product and pricing decisions.” For all the vast subsidies and the mandate, they predicted just one percent more Americans to be on the rolls of the insurance companies in 2014 – which is down from three percent growth in 2013.

One source of uncertainty might be efforts well underway by Rep. Tim Griffin of Arkansas and Sen. Marco Rubio of Florida to repeal the Risk Corridors program.

Griffin and Rubio correctly reason that it’s wrong to force taxpayers to foot the bill for an open-ended bailout on top of the vast subsidies already flowing under the law. If insurance companies can’t make money selling exchange plans even with the mandate and subsidies, then they shouldn’t choose to participate.

Lobbyists for the Blue Cross Blue Shield Association are in freak out mode at potentially losing one of their many sources of tax dollars under the law. They are warning Congress that taking away their Risk Corridors payments “will result in massive premium increases and could cause private insurers to become insolvent… and will ultimately lead to a single-payer system.”

But Aetna CEO Mark Bertolini told CNBC he was indifferent to participating in the Obamacare exchanges because they are a tiny part of Aetna’s business. About three percent of its revenue. And on the Griffin-Rubio bill he said: “Whether or not there's a government bailout because we lose some money on members is irrelevant to us from our standpoint of our earnings.” So much for that single-payer scenario.

Ending Risk Corridors (or alternatively limiting their outlays to program revenues to make them function as originally understood) is not a silver bullet to take down Obamacare, as some on the right might dream. It’s not going to put any insurance companies out of business, notwithstanding the hyperbole from the Blues. But it will save taxpayers billions of dollars and it will force insurance companies to suffer just a little bit more of the consequences of their collaboration with the administration – and wonder if it’s time to break ranks and support real reforms. And a bailout-weary American public would surely be appreciative.