Repealing the Individual Mandate is a Budget Deal Winner 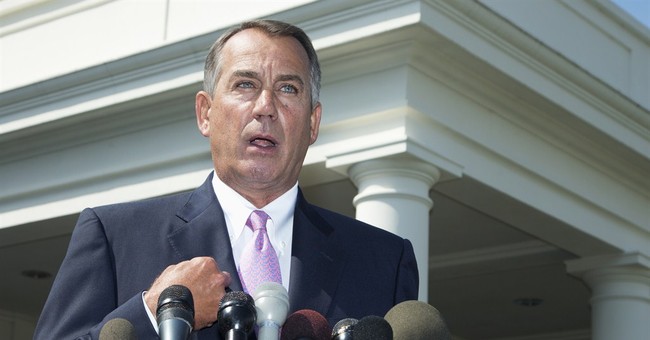 Syria has taken over the top of the agenda, but very soon Congress will necessarily return to high stakes fiscal negotiations, not just over the continuing resolution to fund the government, but also over the federal debt ceiling. Speaker John Boehner is committed to the principle that has so effectively constrained discretionary spending since the historic summer 2011 deal: debt ceiling increases must be matched dollar-for-dollar with new spending cuts. At the top of the spending cut priority list should be elimination of the most widely hated aspect of the new health care law: the individual mandate.

You might assume that repealing a mandate enforced with a tax would increase the deficit because of the lost tax revenue. But this particular tax is so destructive and ill-advised that repealing it would actually bring a shockingly large windfall in federal deficit reduction.

The Congressional Budget Office revealed this curious fact deep in the 2011 edition of its “Reducing the Deficit: Spending and Revenue Options.” The ten-year score showed that for the years 2012 to 2021, repealing the individual mandate would reduce deficits by a hefty $282 billion. And that included two years – 2012 and 2013 – with zero savings because the mandate was not yet in effect. A new estimate for the next ten years would likely show deficit savings of approximately $400 billion.

How can repealing a tax actually reduce the deficit? When the $27 billion the tax is estimated to raise is dwarfed by the spending impact, in this case well over $200 billion (for the old score). Half of the savings comes from reduced Medicaid spending.

(If you’re wondering why so many Medicaid-eligible people won’t enroll in the absence of a mandate forcing them to, the answer could be that, according to the New England Journal of Medicine: “Medicaid coverage generated no significant improvements in measured physical health outcomes.”)

The rest of the deficit reduction (other than some minor impacts on employer provisions) is about evenly split between the cost of subsidies for people who would only buy insurance because of the mandate, and higher tax revenue from people who would, in the absence of a mandate, earn more taxable compensation from their employers instead of health benefits.

President Obama knew the mandate was wrong back when he was a candidate in 2008. “The main difference between my plan and Senator Clinton’s plan,” he said, “is that she’d require the government to force you to buy health insurance and she said she’d ‘go after’ your wages if you don’t.”

But once in power, Obama reversed his position and pursued a corrupt bargain with the big insurance companies, who basically told Congress and the Obama administration that they would go along with the law’s expensive new regulations as long as the government forced everyone to buy their (even more expensive) product.

That corrupt bargain represents everything that’s wrong with Washington. Instead of helping the uninsured afford insurance by making it less expensive, the mandate’s penalty tax punishes them. They still don’t have insurance, but now are poorer because of the tax.

Yet, even as Obama granted a delay in the law’s employer mandate, providing relief to the largest and most influential corporations, the unfair individual mandate is still set to take effect on January 1 – even though a July poll found that just 12 percent of Americans now support its immediate implementation.

Congress can fix this situation by insisting that any fiscal deal include repeal of the individual mandate. If the health care law’s supporters are right about the law’s many merits, then they shouldn’t need to force people to buy into it. And taxpayers can pocket $400 billion in deficit reduction at the same time.