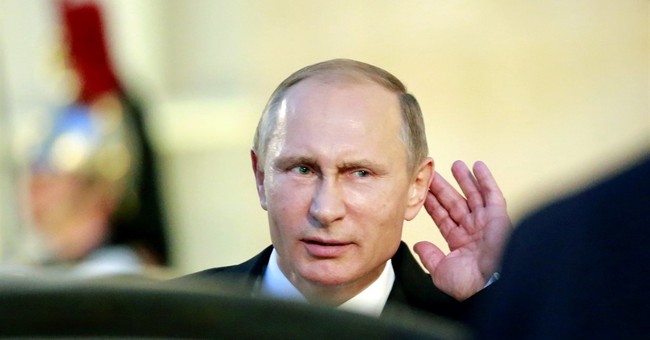 President Putin’s decision to deploy aircraft in Syria and bomb opponents of President Assad may be “a recipe for disaster” as President Obama asserts, but it neatly exploits U.S. and western European vulnerabilities in the region. And it gives Russia leverage to undermine NATO and destabilize the oil-rich Middle East.

Turkey and the Gulf States have considered a no-fly zone to protect moderate rebels opposing Assad, but now they dare not challenge Russian jets without the participation of U.S. and European airpower. As Obama and his European counterparts demonstrated in the Ukraine, they are not willing to use their military assets to confront Putin.

U.S. efforts to support moderate rebels to oust Assad have failed. We can expect the tyrant to continue bombing his own people and drive even more refugees to Europe.

Moreover, it is apparent that the Obama Administration and the Europeans are not willing to do what is necessary to stop ISIS from spreading throughout the Muslim world and recruiting young people in Europe and North America to fight for their cause and attempt terrorist acts.

Airstrikes, materiel, intelligence support, and training for friendly government armies and insurgents in Syria, Iraq and elsewhere have not turned the tide against ISIS, and it is doubtful that Obama or even a hawkish President Hillary Clinton will ever have the stomach to act decisively.

In ISIS, the West is fighting cancerous religious ideas more than armies. Short of committing a massive expeditionary force to exterminate ISIS—something virtually impossible with CNN sending graphic battlefield images in real time—the appeal of ISIS to young disaffected Muslims and western youth will not be squelched.

In 2015, Germany alone expects as many as 1.5 million refugees, and the unrelenting flood of immigrants poses an existential threat to Western Europe—economically, politically and culturally—that North American societies built on immigrants can little appreciate.

To stop the tide, at least from the Middle East, and mount a more effective campaign against ISIS, Europeans now have to do business with Russia, and its regional ally, Iran, which possesses considerable military technology and materiel resources and is supporting paramilitary forces aligned with Assad in Syria and elsewhere.

All that rattles both Eastern European members of NATO close to Russia and Saudi led Arab states aligned with the U.S. and Europe. To obtain Putin’s cooperation, Europeans will likely have to render ineffective economic sanctions imposed on Russia after the invasion of the Ukraine.

The Europeans will have much less leverage to enforce the recently signed nuclear weapons agreement with Iran. Without European support, the United States will be hard pressed to stop Iran from developing nuclear weapons.

That will give Russia a free hand in Eastern Europe. Namely, the ability to compromise the sovereignty and strongly influence the economic and political alignment of eastern NATO states like Poland and Latvia.

Saudi Araba has the technical capacity to develop nuclear weapon. Faced with its arch rival, Iran, potentially having the bomb and looking at how the Obama Administration has failed to effectively support allies in the Ukraine and in the Middle East, the Saudis may well feel compelled to discretely develop or purchase nuclear weapons too. And other oil-rich nations could then purchase off the shelf weapons, perhaps from Pakistan.

Putin is mercurial but hardly unbeatable at international intrigue. He has so effectively undermined the influence and interests of American and European leaders, because they lacked the political resolve—and the stomach—to do what is necessary in the Ukraine and Middle East.