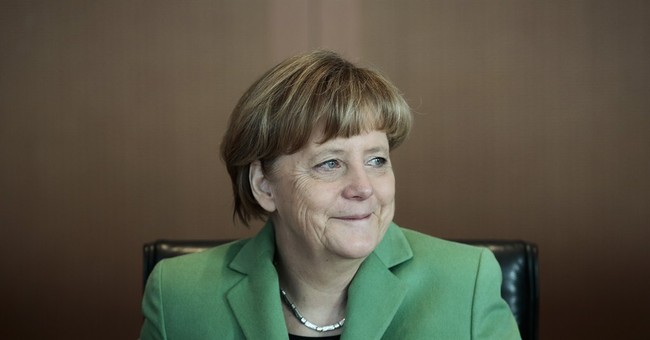 In 2011, a bailout imposed a haircut on private creditors and shifted most of Greece’s sovereign debt to the Troika—European Union member governments (principally Germany and France), the International Monetary Fund and the European Central Bank.

Governments can jettison public employees and raise taxes quickly—deflating their economies—but structural reforms can take a long time to reignite growth. Consequently, Greek GDP is down 25 percent and instead of improving Greek solvency, the national debt has soared from 110 percent of GDP to 160 percent.

Recognizing this folly, the new Syriza government wants to ease spending cuts—for example, restore pensions to private sector workers—and slow down the structural reforms. Acknowledging Greece can never repay its debt, it wants to restructure what it owes—nice words in diplomatic circles for imposing a haircut on the Troika.

Merkel is balking but sooner or later the Germans must recognize they can’t get blood from a stone, and come up with some face saving device. For example, forgive interest payments and lengthen maturities on existing debt so far into the future that much of the debt is essentially forgiven.

Without a deal soon, Greece must at least technically default. Its present aid package expires at the end of this month, tax revenues are falling. Subsequently, the Greek government must come up with payments of more than €11 billion to the IMF and the ECB.

Absent a deal with the Troika, Athens could exercise sovereignty—reintroduce the drachma, convert bank deposits and outstanding debt from euro to drachma, and print the money it needs.

Greece would simply join the ranks of EU members, like Poland and Czech Republic, outside the Eurozone, and let the exchange rate for the drachma slide. This would reduce the euro value of what it owes, and impose, albeit clumsily, the debt restructuring. Falling wages and land values, as denominated in euro, would attract new investment and reignite growth.

The Germans could play hardball—take the Greeks to the European Courts, demand payment in euro and threaten to throw Greece out of the EU—but Angela Merkel had better look at the map. Greece is at the western gate of the Mediterranean and strategically important to NATO.

Amazing how geography can give small countries big leverage with great nations!

Either the Germans will gracefully take the haircut—paper over the mess with a succession of face saving deals—or accept Greece’s departure from the Eurozone.

All this will cause private creditors to get nervous about what Italy, Spain and Portugal owe, and push up the rates they must pay to continue borrowing money. Unless the ECB focuses its new program to purchase €60 billion of sovereign debt each month in the direction of those countries, they will be forced to restructure their debt as well and rethink their austerity programs.

Both would be a bitter pill for Merkel. Such massive purchases of sovereign debt amount to financing those Mediterranean states governments by running the printing presses—something the German polity cannot tolerate. And austerity as cure for what ails Europe would be once and for all thrown where it belongs—on the scrap heap of failed ideas.

Angela Merkel has strong-armed the Mediterranean states into debt deals and austerity that are remindful of 18th Century medicine—bleeding patients to restore health.

It’s about time Merkel got what she deserves—a good haircut and discrediting.