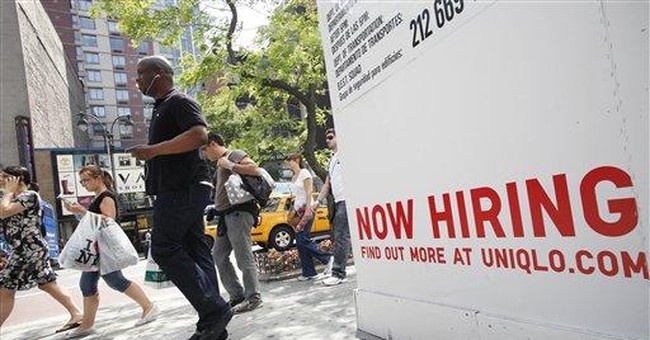 This Friday the Labor Department is expected to report the economy added 230,000 jobs in August. The pace has picked up a bit but is still far less than needed to reemploy all the prime aged workers displaced in the wake of the financial crisis.

The jobless rate is down to 6.1 percent but that statistic is deceptive. For example, one in six adult males between the ages of 25 and 54 is not working. Many don't show up in the unemployment count, because they are not actively looking for a job.

They spend their days cluttering park benches or watching ESPN, because they are too discouraged to look for work or lack the incentive to make an effort.

Since 2000, Congress has enhanced the earned income tax credit, and expanded or enacted new programs that provide direct benefits to low and middle income workers, including ObamaCare and Medicaid, food stamps, and rent and mortgage assistance.

Generally, benefits phase down as family incomes rise, and this effectively taxes additional income as much as 50 percent. Consequently, government benefits penalize work and skills acquisition, and often encourage one partner in two adult households to be idle.

Many unemployed men combine assistance from wives, relatives and friends with government benefits to avoid work altogether or cling to part-time employment to avoid tripping income thresholds that would result in the loss of benefits.

Similarly, many women with good skills and education, who might enjoy the fulfillment and independence of working, are encouraged to avoid employment.

Also, these programs offer incentives for single people to work only part-time and contribute to skills shortage.

The whole system encourages retailers and other employers to chop two jobs into three and limit hours to less than 30 per week.

Millions of young college graduates are stuck in dead end jobs that simply do not require the skills imparted by a four-year degree and were filled by high school graduates a generation ago.

Superfluous graduate programs provide professors with extra income, take disgruntled college graduates off the streets and lower the unemployment rate, but ultimately those leave folks in their late 20s burdened with crippling debt and unable to buy a home or comfortably start families.

If Dickens were writing today, the exploitive headmaster at the children's work house might well be a university president, his henchman a professor of international studies, and his board the directors at Sallie Mae.

The root cause of the jobs crisis is chronically anemic growth.

Since 2000, the U.S. economy has expanded 1.7 percent per year and created about 6.1 million jobs, whereas the comparable figures for the Reagan-Clinton years were 3.4 percent and 41 million.

Through the Bush and Obama years, Washington has failed to address fundamental structural problems that constrain U.S. international competitiveness and slow growth.

These include the purposefully undervalued Chinese and Japanese currencies, which cheapen imports, siphon off demand for American-made products and destroy factory jobs; federal restrictions on offshore oil and gas development, which unnecessarily perpetuate U.S. oil imports and finance terrorism; business regulations more burdensome than necessary to accomplish worthy objectives, which create prestigious jobs for political supporters and create monopolies for campaign contributors; and a tax structure ranked one of the worst in the world for encouraging sound business decisions and supporting international competitiveness.

Republicans and Democrats are equally guilty of such corruption. What problems get addressed and who gets a tax deal or monopoly depends on who worked for incumbents' campaigns and who put up the cash.

The politically connected get the uranium in the uranium mine and the ordinary worker gets the shaft.