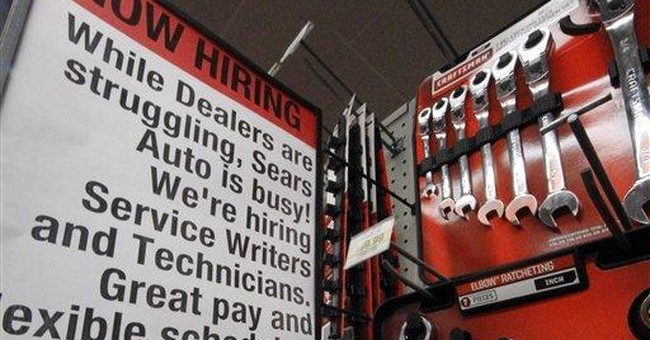 The Labor Department reported the economy added only 209,000 jobs in July. The unemployment rate rose to 6.2 percent, but that hardly tells how tough the labor market has become for ordinary folks.

The jobless rate may be down from its recession peak of 10 percent, but much of this results from adults, discouraged by the lack of decent job openings, have quit altogether. They are neither employed nor looking for work.

Only about half of the drop in the adult participation rate may be attributed to the Baby Boom generation reaching retirement age. Lacking adequate resources to retire, a larger percentage of adults over 65 are working than before the recession.

Many Americans who would like full time jobs are stuck in part-time positions, because businesses can hire desirable part-time workers to supplement a core of permanent, full-time employees, but at lower wages. And Obamacare’s employer health insurance mandates will not apply to workers on the job less than 30 hours a week.

Since 2000, Congress has enhanced the earned income tax credit, and expanded programs that provide direct benefits to low-income workers, including food stamps, Medicaid, Obamacare, and rent and mortgage assistance.

Virtually all phase as family incomes rise, either by securing higher hourly pay or working more hours, and impose an effective marginal tax rate as high as 50 percent. Consequently, these programs discourage work and skills acquisition, and encourage single parents and one partner in two adult households not to work. Often, these motivate single people to work only part-time.

Employers can, intentionally or unintentionally, abuse the H-1B visa program, which permit businesses to employ foreign workers when qualified Americans are unavailable. Americans may be overlooked, because they demand higher wages, or are not networked with immigrants that are already employed in technical and managerial positions.

The economy has created only about 6 million new jobs during the Bush-Obama years, whereas the comparable figure during the Reagan-Clinton period was about 40 million. A recent study by the Center for Immigration Studies indicates that virtually all the new jobs created since 2000 went to immigrants, whereas none were created for native-born Americans.

Adding in discouraged adults who say they would begin looking for work if conditions were better, those working part-time but say they want full time work, and the effects of immigration, the unemployment rate becomes about 15 percent—and that is a lower bound estimate.

Many young people are being duped both by unscrupulous for profit, post-secondary institutions—as well as accredited colleges and universities with low admission standards—to enroll in useless programs. They would likely be in the labor force now but for easy access to federally sponsored loans and will end up heavily in debt.

Adding in these students, the real unemployment rate among U.S. citizens and permanent residents is at least 18 percent.

Since 2000, GDP growth has averaged 1.7 per year, whereas during the Reagan-Clinton years, it was 3.4 percent. The reluctance of both Presidents Bush and Obama to confront Chinese protectionism and currency manipulation and open up offshore oil for development have created a huge trade deficit that sends consumer demand, growth and jobs abroad.

All of this suppresses wages except for the most skilled and talented workers.

No surprise, average family income, adjusted for inflation has fallen from about $55,600 in 2007 to $51,000 even as the gap between families at the bottom and top widens.