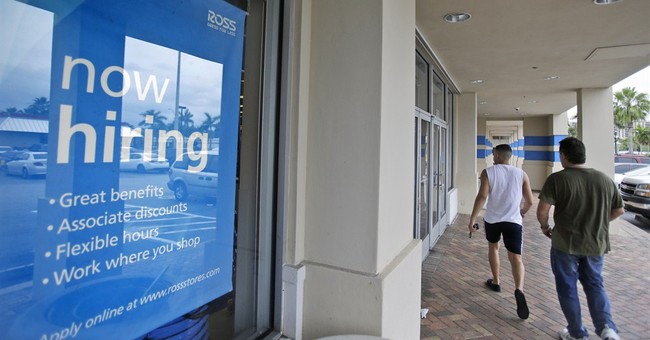 The economy added 288,000 jobs in June. Overall jobs creation has improved in 2014, but it remains far short of the 390,000 needed each month to keep up with population growth and genuinely reduce unemployment, and well less than the pace accomplished during the Reagan – Clinton prosperity.

The jobless rate is down to 6.1 percent from the recession peak of 10, but most of the reduction has been accomplished by adults quitting the labor market—neither working nor looking for work. If the same percentage of adults were in the labor force today as when Presidents Obama or Bush took office, the jobless rate would be 10.2 and 12.2 percent, respectively.

Three problems have limited jobs creation during both Bush and Obama years—slow economic growth overall, a disinclination to control the border with Latin America or disappoint businesses’ appetite for cheaper skilled labor from Asia, and the work disincentives imposed by social programs intended to redress income inequality and help the disadvantaged.

In this century, GDP growth has averaged 1.7 per year, whereas during the Reagan – Clinton period it was 3.4 percent. The reluctance of both Presidents Bush and Obama to confront Chinese protectionism and currency manipulation and open up offshore oil for development have created a huge trade deficit, which sends consumer demand and jobs abroad.

Efforts to bring jobs back to America are frustrated by government regulations more burdensome than necessary to accomplish their legitimate objectives, and skilled labor shortages. Paradoxically in an economy with 9.5 million unemployed and actively looking for work, too many lack skills appropriate to the 21st Century economy, and seem to lack adequate incentives to acquire those.

The combination of free and subsidized health care, the earned income tax credit, and other government programs whose benefits phase out as incomes rise, imposes high effective marginal tax rates on lower income working families. These often encourage prime working age adults to continue in part-time work, rather than take full time employment and lose benefits, or to not work at all.

Many have little incentive to acquire skills in demand. Efforts at improving primary and secondary education and access to college too much focus on basic skills and granting degrees without much concern for the course of study selected. Simply, most reforms have not adequately emphasized creating skill-ready graduates for a rapidly changing economy.

Immigrants—legal and illegal combined—are all too eager to fill the skills void and have captured virtually all the jobs created since 2000. Meanwhile, the share of the working age native born population holding a job has significantly fallen.

Baby boomer retirements are not appreciably driving down the adult employment rate—Americans between the ages 65 to 69 working has risen from 23 to 30 since 2000. It’s prime working age Americans that are not showing up—for example, 1 in 6 adult males between ages 25 and 64 is not working.

Twenty-six million Americans are working part-time, many owing much to poor economic conditions and government disincentives to work full time. Adding in the adults working part-time that want full time work but can’t find it, and adults not currently in the working force but who say they would return were conditions better, and the unemployment rate rises from 6.1 to more than 12 percent.

No surprise, the average family's real income continues to drop, and the gap between the wealthiest and the rest of us widens.