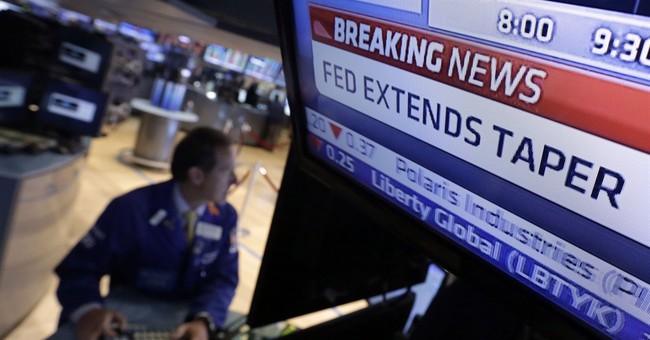 Inflation is soaring, and the Federal Reserve is looking away.

It has printed trillions of dollars to save big banks from their financial crisis debauchery and to keep interest rates low to spur economic recovery, but those have not improved the lot of ordinary Americans.

Here are five things you should know:

1. Inflation Is Heating Up

The Fed target is 2 percent inflation, but since March the pace has quickened. In May, the Consumer Price Index the government uses to adjust Social Security and other benefits increased at an eye-popping 4.3 percent annual rate.

Troubles in Iraq are pushing up gas prices, and growth in China is creating huge demand for grain on global markets, increasing meat, dairy and other grocery prices.

Despite inflation warnings, Fed policymakers have stated they intend to keep interest rates near zero for a “considerable time” into 2015.

Most economists believe some inflation helps growth — hence the Fed target of 2 percent instead of the price stability this economist advocates. However, it has historically been inclined to appease bankers and keep interest rates low until it is too late.

Since 1950, inflation has averaged about 3 percent a year, violating the Fed’s mandate to pursue price stability.

The causes of the financial crisis and slow growth have not been fixed. The six largest banks have an ever tighter grip on savings deposits nationally, and they don’t very well serve the smaller businesses that are the job creators. Instead, they borrow cheaply from the Fed to gamble on foreign exchange and commodities markets, and they finance pirate equity — oops, I mean “private equity” — deals that cannibalize jobs.

The jobs created are mostly near the top and bottom and too often go to immigrants eager to beat down wages, making the bite of inflation even worse. Since 2000, all of the 5.6 million jobs created have gone to new arrivals, while unemployment among American-born adults has rocketed.

The Fed printing money won’t fix those dysfunctions or stop President Obama from building a permanent Democratic majority by beefing up the U.S. Hispanic population

Cheaper access to elderly savings boosts profits and bonuses on Wall Street, and more Americans over 65 are working now than in 2000.

Traveling around the country, I observe once middle class women in their 70s waiting tables and tending bar. Older men are a convenient part-time workforce on supermarket produce aisles.

Bush and Obama policies have strengthened monopolists, for example, in the cable TV and high speed Internet, professional sports, drug and hospital industries. Those combine to push up cable TV and health care costs.

Pell grants and too many cheap loans push up tuition for middle class students even more rapidly than health care prices.

The federal ethanol program is pouring so much corn into gas tanks, diverting it from livestock feed, it is sending up beef and pork prices more than 10 percent a year.

Overall, federal policies are slowing growth, driving up prices and depriving American-born workers of what few jobs are created — keeping a tight cap on wages even as inflation rockets.

All this feeds politicians’ appetite for more government intervention, subsidies for campaign donors and entitlements for constituents. To finance it all, it imposes stealth taxes on ordinary Americans: unemployment and inflation.