No, Tim Cook Is Not Political

Peter Flaherty
|
Posted: May 15, 2019 2:58 PM
Share   Tweet
The opinions expressed by columnists are their own and do not necessarily represent the views of Townhall.com. 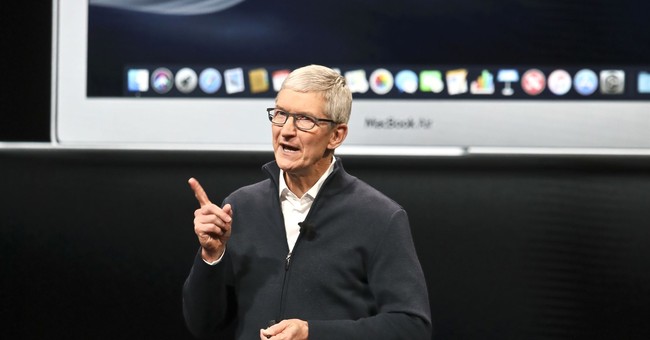 Apple CEO Tim Cook claimed recently that he and his company do not engage in the dirty business of “politics” but only “policy.” He is supposedly above it all, guided instead by doing “what’s right.”

Cook acknowledges that some may not like his “policy” decisions, but that he thinks they admire Apple’s leadership for sticking to their principles. He added that the company only weighs in where it has a “legitimate position or lens on the issue,” like climate change, education, immigration, and transgender restroom policies.

“I think people appreciate that, even when they do disagree,” he said, explaining his beliefs about the role of business in public issues. “We do them out of believing deeply that they’re right and we do have a unique lens. We focus on the policy, not the politics.”

Cook has a self-serving definition of “politics.” It apparently does not include raising money for candidates, lobbying Congress, or plunging the company into some of the most controversial and divisive issues of the day.

The leader of the global computing giant also meets with world leaders including Presidents Obama and Trump, but also those of other nations. In March he toured China with Vice Premier Sun Chunlan before he attended the China Development Forum and another event hosted by Apple. Before that, in January, he attended the World Economic Forum in Davos, where he met with many other nations’ leaders. They must have discussed golf or the weather, but definitely not “politics.”

How about lobbying? According to information compiled by the Center for Responsive Politics, Apple Inc. spent $6.68 million lobbying the federal government in 2018, and $7.15 million the previous year. Company disclosures show their lobbyists chatted up Congress members on nearly every public policy issue you can imagine.

Then there’s the electoral system. Cook has hosted fundraisers for Paul Ryan and Hillary Clinton, and in 2016 donated more than $236,000 to a pro-Hillary SuperPAC.

Yet, Cook points to the fact that Apple does not have a corporate political action committee. “Apple’s probably the only large company, I would think, or one of the very few, that doesn’t have a PAC,” he said. “I refuse to have one because it shouldn’t exist, right? I think the people that should be able to able to donate are the people who can vote.”

Add it up and one sees that Apple participates in nearly all the processes that every other large corporation engages in to affect public policy, which all the others call “politics.” But Tim Cook thinks he and his company are special because they go about it a different way, by doing “what’s right.”

And how does Cook define “what’s right?” Well, it’s what he says it is. Apple’s public policy positions perfectly match Cook’s own personal social and political views.

The internet’s economics of scale allow for an unprecedented accumulation of wealth in a handful of Silicon Valley executives. Cook can have anything he wants, and he usually gets it. Unfortunately, it includes imposing his personal views on the rest of the company.

Apple is a public company with millions of shareholders, directly and through mutual and retirement funds. It has more than 100,000 employees and millions of customers. Many do not share Cook’s political views. When Cook speaks in the name of the company, he does a disservice to those who are forced to become a party to political and social causes with which they disagree.