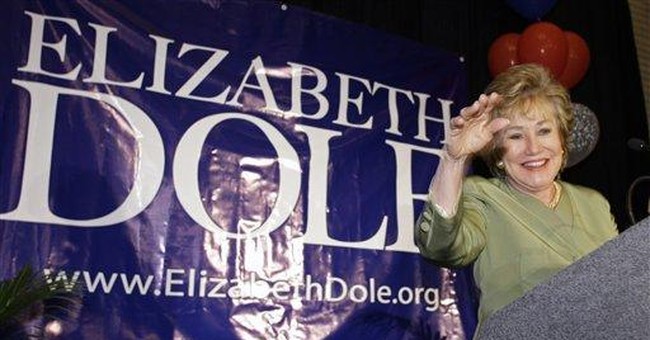 A good lady is about to leave Washington, D.C. after decades of public service. I refer to Senator Elizabeth Hanford Dole (R-NC), who was defeated in her bid for re-election in the 2008 election. Dole married Senator Robert J. "Bob" Dole in 1975. President Gerald R. Ford named him his running mate after dumping the unpopular Vice President, Nelson A. Rockefeller. Dole was Majority Leader of the Senate from 1985 to 1987, when Democrats regained control of the Senate and he became Minority Leader. Dole remained the leader of the Senate Republicans until he resigned his post to be the GOP Presidential nominee in 1996.

All this time Elizabeth Dole was at his side. But she became an important figure in her own right. When Ronald W. Reagan was elected President in 1980 Dole became Reagan's liaison to conservatives, veterans and others. Soon Reagan named her Secretary of Transportation. By all accounts she did an admirable job. In the Administration of George H. W. Bush, Dole became Secretary of Labor. She and Bob Dole became a power couple in D.C.

When Senator Jesse Helms (R-NC) retired after 40 years in the Senate, Elizabeth Dole ran for his seat. He campaigned for her. She suggested she would vote like Helms and indeed she did. However, some North Carolinians suggested that her constituent services left much to be desired. And by all accounts she ran an inadequate re-election campaign.

I watched with sadness as she questioned automobile manufacturers in the lame duck session of Congress. Soon she will have to pack up her office and head home. Her husband is now all but retired. This once-powerful couple is out of power. Dole is gracious about her loss. One would hardly know she had been defeated. Yet she leaves Washington having accomplished much in her service in the White House, the Transportation and Labor Departments and the United States Senate. This is one fine lady, the likes of whom we probably will not see in this town for many years.