Questionable Economics at the Presidential Level 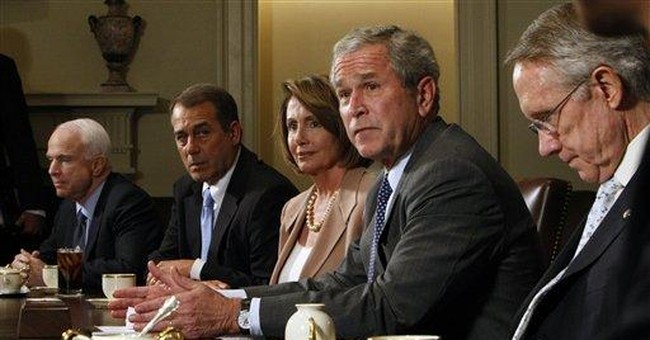 Messages have poured in asking my opinion of the trillion-dollar bailout announced by President George W. Bush late last week. I hesitate to discuss this topic because I am not an economist nor do I have any special insight which would enable me to offer an informed comment. I can provide my opinion. For what it is worth, here it is.

The White House arranged a conference call with an official who had been working on the matter. I sat in on the discussion. Surprisingly, there were only two questions asked. Mine was one of them. I asked the White House economist to give me an estimate of what this bailout eventually would cost the taxpayer. He replied that he had no idea. It depended, he said, upon how well the new entity which would buy and re-sell assets handles the situation. In a best case scenario the entity actually would make money. That would happen if the entity were able to buy low and sell high. On the other hand, if things didn't work out, the economist said, the taxpayer could be on the line for a lot.

President Bush, in defending the hundreds of billions required to bail out AIG, said it was too big to fail. However, there are many thriving businesses inside AIG not in any danger of going under. AIG has assets of $17 trillion whereas $100 billion was needed in twenty-four hours to prevent bankruptcy. AIG could not get its hands on cash fast enough, it would seem. That being the case, I don't understand why the highly profitable parts of AIG couldn't have been separated out while letting the part of AIG which experienced the shortfall declare bankruptcy. One thing, at least we won't have to suffer through those AIG commercials with precious children who know more about running their businesses than their parents. One of the children always confesses that his parents are with AIG to the cheers of everyone else.

I also don't understand the Federal Government's picking and choosing which investment banking firms are to survive and which are to disappear. The market is supposed to determine this. In fact, I thought one of the cornerstones of the free-enterprise system is that companies which are run poorly likely will fail. An elderly gentleman called in to Austin Hill's radio show on WMAL Radio in Washington. He said he had come to the United States four years ago from the former Soviet Union. He told Hill that the Russians, despite recent problems, are advancing free enterprise whereas we in the USA are promoting socialism. I am afraid he is correct.

What of the big one? What of the Bush proposal that has the Federal Government picking up all bad debts to allow the banking system to behave as usual? Essentially this would create a two-tier system in which we have capitalism for profits and socialism for losses. This goes against everything in which I ever believed. Ninety-three percent of mortgage holders pay their bills on time. Why not let the other 7% default? If some mortgage bankers are stuck with bad paper because they foolishly gave home loans to people who could not afford them those bankers should have to sink. It seems to me we would be stronger for it in the long run, even though there would be significant disruption in the short term. I hope I am wrong. The stock markets surely liked Bush's proposal. It wiped out all loses of the previous week. If Bush is proved to be correct, he will go down in history, like Harry S. Truman, as a courageous leader who bit the bullet when the going was tough. If he is not, he will replace Herbert Hoover and Jimmy Carter as a failed President.