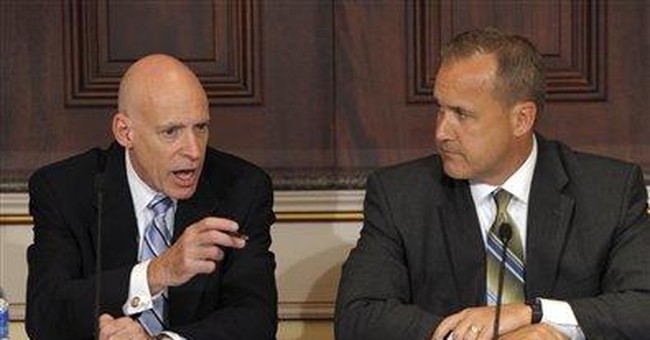 Earlier this week the White House announced that the projected Fiscal Year 2009 deficit will be $490 billion, an amount much higher than originally anticipated and also a record for the national deficit. The deficit for the current fiscal year is expected to reach $410 billion. Among the factors contributing to the high numbers are the cost of military expenditures in Iraq and Afghanistan, an economic downturn which is producing fewer tax revenues, the $170 billion tax-rebate package enacted earlier this year, and an inability in the Congress to eliminate or trim Federal programs, costs and earmarks.

As usual, politicians and many of the major media outlets explicitly or implicitly have blamed President George W. Bush's tax cuts for much of the problem. According to THE WASHINGTON POST, "Neither [Senator John S.] McCain nor [Senator Barack H.] Obama have been particularly mindful of the budget deficit. McCain has proposed to extend all of Bush's first-term tax cuts, which expire in 2011, and add hundreds of billions of additional tax cuts, mostly for business. Obama would allow only the tax cuts for the most affluent [families making $250,000 or more] to expire, leaving the lion's share in place and adding additional tax cuts for the working poor and middle class...." CNN stated, "The Bush administration has spent heavily on the wars in Iraq and Afghanistan, and faces a large budget shortfall in tax revenue because of Bush's tax cuts and a souring economy." Senator Kent Conrad (D-ND) criticized the Bush Administration for its "reckless fiscal policies," and blamed Bush's tax cuts for driving the Federal Government into deficit, saying he will be remembered as "the most fiscally irresponsible President in our nation's history."

While the last statement surely is an exaggeration, Bush has been a tremendous disappointment on fiscal issues. His reluctance to veto a spending bill for most of his presidency has allowed government spending to become irresponsible and to grow out of control. He inherited a budget surplus of $128 billion when he entered office but immediately squandered it - with the help of a Republican Congress, I might add.

The problem is not his tax cuts, though. Bush's tax cuts stimulated tremendous economic growth. History and most economists inform us that a reduction in the tax burden almost always stimulates growth. After 1998, when Ireland reduced its corporate tax rate to 12.5%, its economy grew so quickly it became known as the "Celtic Tiger." Unemployment fell from 18% to 5.5% and Gross National Product increased 62% in real terms. Meanwhile, the corporate tax rate in the United States hovers at 35%, one of the highest in the world among industrial countries. Middle-class American families still are suffering under the egregious Alternative Minimum Tax. And Americans face the prospect of a tax increase in 2011 when the Bush tax cuts expire unless Congress passes them again.

The American economy would benefit significantly from lower taxes. Yet disingenuous and influential members of the media and of Congress insist that the current malaise in the Federal Government's budget is due to tax cuts. This is absolutely incorrect. The problem is that our elected officials lack the fortitude and wisdom to make the necessary cuts in spending that budget realities demand. To THE POST's credit, it noted that Senator Obama would like to spend hundreds of billions more on healthcare, energy and education. Senator McCain has not made the issue of government spending a priority in his campaign.

It should be clear that an enormously expensive national healthcare program, the pet project of many on the left, is fiscally impossible unless Congress raises taxes even higher, which is not implausible. True, President Bush has failed fiscally. What we need to think of now is the future. Congress must make some difficult decisions and cut the Federal Government's expenditures. Also, both Presidential candidates should make the issue a top priority.

If the deficit continues to grow, the Federal Government borrows more money to pay for its bureaucracy, subsidies and social programs, and taxes are raised to meet the fiscal demands of new spending programs, the downturn in the American economy could be prolonged and be much worse than it currently is.