The First (and Most Important) First Amendment

Paul Jacob
|
Posted: Jun 04, 2018 12:01 AM
Share   Tweet
The opinions expressed by columnists are their own and do not necessarily represent the views of Townhall.com. 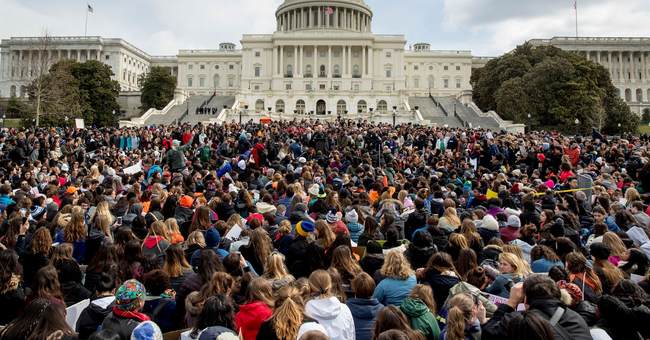 Last week’s most consequential story was not covered by a single television network or cable outlet. Nor was it discussed on talk radio. The major newspapers took no note of it, and not a single voice in the universe of blogs and news sites on the worldwide web uttered even a syllable of comment.

But last Tuesday, Eugene M. LaVergne filed a motion, pro se, before a federal three-judge panel convened in the D.C. Circuit to hear his challenge to “the validity and Constitutionality of the 2010 Apportionment of the U.S. House of Representatives.” He and four other rabble-rousing citizens of New Jersey want an order from the judges “immediately fixing an expedited briefing schedule on the pending motion for Summary Judgement and a decision on that motion from this Three Judge Court on an expedited basis.”

Their lawsuit makes a straightforward, but rather seismic claim for the judges to consider: We have another constitutional amendment you haven’t been told about. A new First Amendment.

Huh? Well, actually, it is the old, original first amendment.

A bit of history: We are taught in school that the first ten amendments are known as the Bill of Rights. Hooray!

Two of the original 12 amendments did not pass at that time: Article the First and Article the Second.

Yet in 1992, after more than two centuries of wandering around legislatures, Article the Second was finally ratified by the necessary three-fourths of the states as the 27th Amendment to the Constitution. Sadly, it’s sensible prohibition — “No law, varying the compensation for the services of the Senators and Representatives, shall take effect, until an election of representatives shall have intervened” — was immediately rendered toothless by the automatic cost of living salary adjustments congressmen had already provided themselves.

As for the rejected Article the First, Mr. LaVergne offers startling news: it wasn’t rejected, after all; it was actually ratified by the necessary three-fourths of the states and, therefore, should be enforced as the highest law in the land.

In an eight-pound, 575-page book (that I just bought on Amazon), “How ‘Less’ is ‘More’: The Story of the Real First Amendment to the United States Constitution,” he details in words and pictures his romp through the archives of our history, making the case that Article the First was indeed made part of the Constitution, some 226 years ago, when on June 21, 1792, Kentucky’s legislature voted to ratify, making it the twelfth of fifteen states at that time to do so.

Several states — Kentucky, Connecticut and Virginia — apparently did not report their legislative approval and so no action was taken on the amendment by the federal government. But the Constitution’s Article V, which provides the process for amendments, does not require “reporting” but only ratification. It reads that amendments “shall be valid to all intents and purposes, as part of this Constitution, when ratified by the legislatures of three fourths of the several states.”

Today, LaVergne is certainly reporting the facts of those ratifications. Moreover, he is demanding that the three-judge panel “declare and confirm that the correct, fully ratified and consummated, literal text of Article the First is as follows:

“[Line 1] After the fist [sic] enumeration, required by the first Article of the Constitution, there shall be one Representatives for ever thirty thousand, until the number shall amount to one hundred,

“[Line 3] after which the proportion shall be so regulated by Congress, that there shall be not less than two hundred Representatives, nor less than one Representative for every fifty thousand persons.”

What would it mean were there at least one U.S. Representative for every 50,000 people?

The House is currently 435 members, each representing on average 735,000 people. With this new “Representation Amendment,” the House would expand to over 6,150 members.

Those are the numbers.

But what would it mean politically?

First, the 435 members of Congress would hate it with a passion, as their personal power would be reduced proportionately.

Second, the big business and big labor special interests, whose investments in official Washington have so long been so lucrative, would despise it just as much. Why? Because 435 legislators are easier to lobby, cajole, bribe, what-have-you than 6,000-plus would be.

Third, television stations would be sick about it, because it would make campaign ad wars less likely. Because less effective. A district of 50,000 people is easier to reach by walking door-to-door and more wasteful to reach by television than a district of 735,000. And advertising is less compelling when those making up their minds might actually know the candidates running — in real life, I mean.

We taxpayers would want to immediately demand congressional pay be lowered and their pensions ended.

Most importantly, it would result in a better Congress. The closer those representing us are to us, the better job they do as our representatives.

Consider: New Hampshire boasts a 400-member state House of Representatives, in which the average House member votes the interests of roughly 3,000 residents. (And is paid a salary of $100 a year.) On the other end of the spectrum, California’s 80-member Assembly, the state’s equivalent lower chamber, has each assemblyperson representing 483,000 constituents — closer to the size of the average congressional district.

In which state are you more likely to get a call returned, meet with your rep or feel truly represented?

LaVergne is litigating the case pro se; that’s Latin for “on one’s own behalf” — usually meaning by a non-attorney. However, in full disclosure, he is a very sharp, yet currently disbarred attorney. LaVergne was convicted in a strange 2014 case for “misapplication of entrusted funds and contempt of court relating to his duties overseeing an estate matter that was in dispute,” and sentenced to seven years in prison. But he has remained free pending appeal of that conviction and remains confident that he will be exonerated.

Nonetheless, whether a scoundrel, as the powers-that-be in Monmouth County, New Jersey, will no doubt claim, or a crusader for truth, justice and the American way, his case must be judged on its merits. And facts are still facts.

As he told me last week, “No one has disproved what I’m saying.”

In fact, as Justin Haskins with The Heartland Institute, and G.C. Haskins with Johnson Educational Foundation confirmed, “After months of research and a trip to the National Archives, all the claims in LaVergne’s story checked out.”

Nothing would drain the swamp more quickly or more completely than a Congress peopled by representatives in districts small enough for grassroots energy to defeat big money, media consultant driven politics as usual.

Talk about getting money out of politics!