The Man Who Saved the Evergreen Constitution

Paul Jacob
|
Posted: Apr 22, 2018 12:01 AM
Share   Tweet
The opinions expressed by columnists are their own and do not necessarily represent the views of Townhall.com. 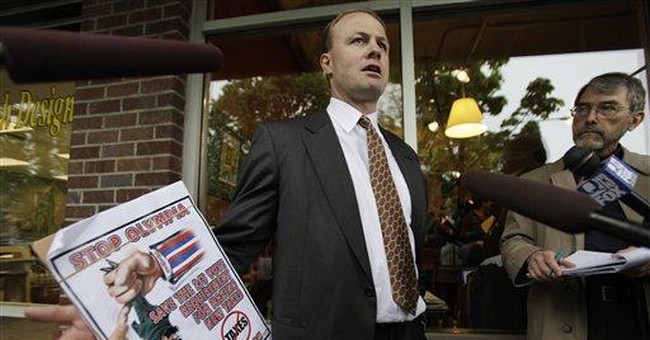 Call it the “feel good” political drama of the Spring.

Just when you thought the rule of law was sliding down the slippery slope of governmental expediency into the abyss of modish public apathy, there comes a man to save the day . . . armed with nothing but backbone.

Oh, and a well-worn copy of the Constitution of the State of Washington.

Tim Eyman is the Evergreen State’s best-known ballot initiative practitioner. On Friday, he won an important court case — even though it wrecked an impressive compromise between state legislators, police, and proponents of Initiative 940, a ballot initiative seeking to make it easier to hold police accountable in deadly shootings.

Call me crazy, but I liked both the compromise and the fact that the compromise was struck down by Thurston County Superior Court Judge Christine Schaller.

Polls have shown strong support for the measure, with 68 percent of likely voters in favor.

De-Escalate Washington went out with petitions and gathered nearly 360,000 voter signatures, thus sending Initiative 940 to the state legislature. It is what’s known as an indirect initiative, because rather than appearing directly before the voters, it first goes to the legislature for its consideration.

The Legislature, according to the clear wording of the state constitution and now Judge Schaller’s adamant ruling, has, as the Seattle Times makes clear, three choices: “Lawmakers can approve the initiative as written; not act, and let the measure go to the ballot; or approve an alternative and put both proposals before the voters.”

As Judge Schaller wrote in her decision, “It was unconstitutional for the Legislature to try and create a fourth option.”

Since legislators “enacted I-940 with amendment, which was not one of the things that is permissible under the constitution,” the judge concluded “the Legislature rejected I-940.” Therefore, she ordered the measure placed on the November ballot.

“This is one of those rare occasions where the Constitution said you can’t do this thing, and they did it anyway,” said Eyman, who brought the lawsuit against the Legislature that had failed to follow the law. He’s correct, though I’m less confident such constitutional violations are all that infrequent.

On the other hand, “Eyman’s victory was a defeat for Andre Taylor and Katrina Johnson,” reports The Stranger, Seattle’s alternative weekly. “Taylor lost his brother, Che Taylor, in an officer-involved shooting in 2016, and Johnson lost her cousin, Charleena Lyles, in a 2017 officer-involved shooting. Both say they have been working with the group, De-Escalate Washington, to push for police accountability.”

While legislators were considering how to react to I-940, De-Escalate Washington entered into discussions with police officials. And, in the waning days of this year’s legislative session, police and criminal justice reformers — and lawmakers — agreed to a compromise: legislators passed both I-940 and a bill making a number of changes to I-940.

“The agreement reached between law enforcement groups and DeEscalate Washington,” Senator David Frockt (D-Seattle) announced at the time, “is one of the most profound and important agreements I have seen since my time in Olympia.”

“To have done that was historic. I mean that’s not going on anywhere in the country. That’s going on here,” Andre Taylor offered after hearing the judge’s decision. “And so, I think that was the most disappointing thing to me.”

Still, even “historic” agreements must follow the law. Legislators could have respected their constitutional limitations and provided voters greater choice by putting both I-940 and their compromise legislation on the ballot.

Instead, legislators ignored the constitution and the voters.

“It was pretty euphoric experience hearing [Judge Schaller] take this really strong position in defense of the initiative process,” Eyman told The Stranger. “It was a very definitive ruling.”

The result? The people of Washington will get to decide for themselves, at the ballot box . . . as it should be.

According to the rule of law, and because of a citizen determined to keep it.