Paul Jacob
|
Posted: Oct 30, 2016 12:01 AM
Share   Tweet
The opinions expressed by columnists are their own and do not necessarily represent the views of Townhall.com. 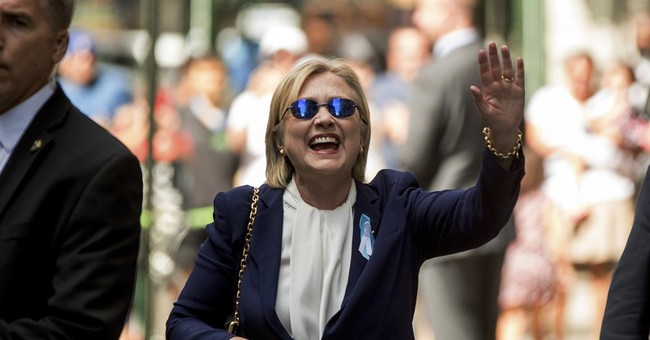 No playwright, no moviemaker — neither Capra nor Spielberg nor The Bard himself — could have scripted a comedy as funny or a drama as tragic as this year’s presidential election.

If it were only happening on the stage or the big screen . . . instead of ‘in reality’ in our own precious country.

On Friday, James B. Comey, director of the Federal Bureau of Investigation, typed up and dispatched a letter across town to congressional leaders. The short missive simply informed that Director Comey’s previous testimony — declaring that the bureau had closed its investigation of Democratic presidential nominee Hillary Clinton’s possible misuse of classified material involving her private email server — was, herewith, no longer accurate.

Ergo, the FBI now again has an open criminal investigation of former Secretary of State Hillary Clinton, the leading candidate to be the next president of these United States in an election culminating in just nine calendar days.

A fact lost on no one, least of all Mrs. Clinton, who took the incredibly rare step of actually holding a news conference. She even took questions from reporters!

Noting that “voting is already underway,” and that (at least to her) this is “the most important national election of our lifetimes,” Clinton argued that “the American people deserve to get the full and complete facts immediately” and “it’s imperative that the bureau explain this issue in question, whatever it is, without any delay.”

But the FBI doesn’t make a habit of explaining themselves or their investigations in the media, especially at the demand of the targets of those investigations.

Then again, we’re witnessing the gold standard of scandal: a Clinton scandal. Anything is possible. Perhaps Mr. and Mrs. Clinton will meet Director Comey on a tarmac somewhere (just like a scene out of Casablanca)and sort this all out to their mutual benefit.

Incredibly, disgustingly, amusingly, pathetically, all of the above-ly, what led the FBI to discover these new emails related to their previous investigation into Hillary’s private email server was an unrelated investigation into none other than Anthony Weiner.

Who can forget the infamous Weiner, the former big-talking New York City congressman whose sexting addiction has apparently taken over his life?

His sexting has ruined his marriage to top Clinton aide Huma Abedin (she’s filed for divorce and custody of their son) and crashed right smack dab into a mighty big October surprise to boot.

The FBI has been looking at Mr. Weiner’s texts to a 15-year-old girl, over which a federal grand jury has now been empaneled. “Legal experts have said Weiner’s latest sexting scandal could get him slapped with a federal charge of sexual exploitation of children,” the New York Post reports, “which carries a minimum of 15 years in the slammer and a maximum of 30.” In the course of the Weiner investigation, federal agents came across a computer reportedly used by both Weiner and Ms. Abedin.

This comes after terrible weeks for Republican Donald Trump. The release of a surreptitiously recorded audio of The Donald boasting about making unwanted advances on women caused an uproar and a not unexpected slide in his poll numbers. Trump apologized (sorta), followed by a progression of twelve women coming forward to level charges that Trump made unwanted sexual advances against them.

The problem for Trump? These charges fit so snugly into a plausible narrative about his own escapades — one that can be built with Trump’s own statements — as to suggest Weinerian proportions. They do more than merely suggest that Trump lacks the temperament to be president . . . or, for that matter, a decent human being.

Hence the reason most Americans have a decidedly unfavorable opinion of the GOP nominee.

Likewise, the vast majority of honest, decent Americans do not trust Hillary Clinton. For a plethora of good reasons. Her email scandal is just the latest in a long string of scandals wherein Mrs. Clinton demonstrates again and again her belief that she ought to live by different rules than those that everyone else must live under. A vote for Mrs. Clinton is raising your lighter in support of corruption and screaming for an encore.

So, who do you support to be the next president: the untrustworthy candidate under investigation by the FBI . . . or the crude, offensive candidate accused of sexually assaulting who knows how many women?

Me? I’m going to waste my vote on someone I actually like and support: Gary Johnson.