The Once And Futures Queen

Paul Jacob
|
Posted: Oct 23, 2016 12:01 AM
Share   Tweet
The opinions expressed by columnists are their own and do not necessarily represent the views of Townhall.com. 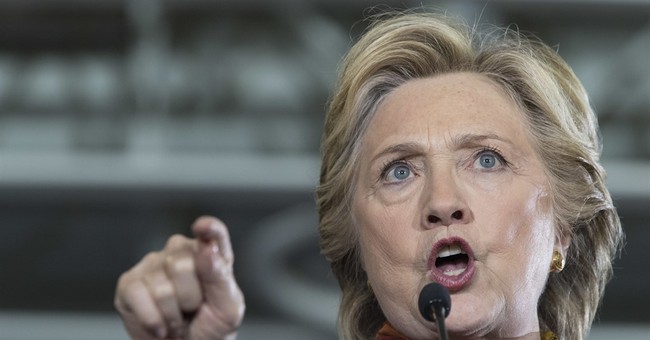 Trust must be earned; Hillary Rodham Clinton hasn’t earned it.

And yet, if the polls hold, Mrs. Clinton will be elected the next president of these United States – the first-ever female commander-in-chief, sure, but still viewed by a healthy majority of Americans as untrustworthy.

Is Hillary Clinton crooked, corrupt, dishonest? Or is she simply a mealy-mouthed politician who obfuscates and prevaricates until you wish she’d tell you a straightforward lie?

You be the judge.

Part of the problem is her husband Bill. The former president has been accused of inappropriate sexual advances and liaisons . . . and even sex crimes. Hillary’s campaign rightly keeps reminding people that he is not on the ballot. But wasn’t Hillary going to have Bill “run the economy”?

Besides, what’s most relevant is her role in defending her philandering (raping?) husband against his many women accusers, with alleged threats, intimidation, and a decided lack of feminist solidarity.

And recall, too, that during the 1990s, Hillary also played her media enablers like a fiddle by charging all Bill’s problems were the doings of “a vast right-wing conspiracy.”

Older folks will remember the “Travelgate” scandal. Soon after the two-for-one couple’s 1993 inauguration, First Lady Hillary fired the long-serving employees in the White House travel office, and replaced them with Friends of Bill & Hill.

And it calls for a second probing inquiry: Are you a Clinton crony in good standing?

Don’t forget the sniper fire Clinton said she dodged in Bosnia. A new Internet video suggests that the Fact Checker may have been wrong and Hillary could have been speaking truth to power all along. Unfortunately, the video has not been officially authenticated.

Hillary’s role in all the many Bill & Hillary scandals during Bill’s 1990s presidency, led the late William Safire to famously write: “Americans of all political persuasions are coming to the sad realization that our First Lady . . . is a congenital liar.” Safire noted that Hillary’s “lying was not irrational”; that, in fact, “She had good reasons to lie; she is in the longtime habit of lying; and she has never been called to account for lying herself or in suborning lying in her aides and friends.”

Not for nothing, Christopher Hitchens titled his critical 2012 book on the Clinton machine No One Left to Lie To. Well, there is always a new generation of voters.

On to a more modern Secretary of State Hillary Clinton, and Benghazi. First, the murder of four Americans in Benghazi is an obvious outgrowth of a world-class foreign policy failure. The Obama-Clinton team helped topple the government of Libya without the slightest thought to negative repercussions, nor any plan beyond lighting the match to fire-up internecine warfare throughout the country.

But alas, her policy failure begat another truth-telling failure. Documents obtained by Congress show Mrs. Clinton immediately informing her daughter and then the Egyptians that the Benghazi assault, instead of being spontaneous, was clearly a planned terrorist attack by an al-Qaeda affiliate. Nonetheless, in the heat of the 2012 election, Hillary purposely misled the American people, publicly blaming the attack on an Internet video.

After a supposedly thorough FBI investigation into Secretary Clinton’s use of a private server, FBI Director James Comey recommended against criminal prosecution, but told the nation that Hillary was “extremely careless” in handling classified material and had been vulnerable to foreign hacking. Careless? Hillary seems more slythan careless, having used freeBleachBit to destroy her hard drive, erasing any money trail. And then, Clinton responded to reporters asking if she wiped her server: “Like with a cloth or something?” Chutzpah.

So many scandals, so little column-space. I haven’t even mentioned the colossal conflict of interest that the Clinton Foundation has been during her tenure at the State Department and will likely continue in a Hillary Clinton Administration. Not a word about Whitewater. Or Filegate. Or other female accusers — what the Clinton campaign once dubbed “bimbo eruptions.”

The very latest scandals drip forth from WikiLeaks. When asked on CBS if she had always told the truth, Mrs. Clinton replied, “I’ve always tried to. Always. Always.” But the transcript of a speech unearthed by WikiLeaks presented Hillary explaining the need to have two positions — one in public and another in private.

And when Trump brought this up in debate, she denied it outright. For the public, you see.

WikiLeaks also illuminates the blurred line between media and politics. After taking the interim job as chair of the Democratic National Committee, Donna Brazile has taken a break from her employment as a CNN commentator. But a leaked email suggests Brazile may have sorta “taken a break” months earlier by obtaining an advance copy of a question to be asked of Mrs. Clinton at CNN town hall . . . and delivering it to the campaign.

The ugliest scandal of all, though, was one of the earliest: cattle futures.

There is evidence I find compelling that Hillary took a nearly $100,000 bribe disguised as profits from trading cattle futures, which she did not actually trade. James Blair, “who at the time was outside counsel to Tyson Foods Inc., Arkansas’ largest employer,” supposedly helped Clinton “out of friendship, not to seek political gain for his state-regulated client.”

The windfall profit was more than lawyer Hillary and Attorney General (and then Governor) Bill earned together annually from their two full-time jobs. Quite a risky “gamble.”

So many scandals and lies. Meet the next president.