The Redcoats Opt for Independence

Paul Jacob
|
Posted: Jun 26, 2016 12:01 AM
Share   Tweet
The opinions expressed by columnists are their own and do not necessarily represent the views of Townhall.com. 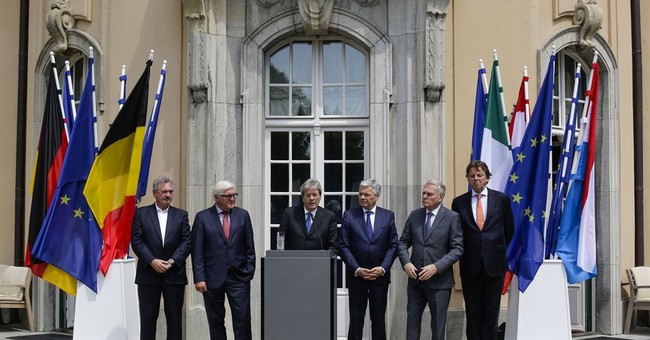 The people of the United Kingdom have decided to go it alone, narrowly voting 52 to 48 percent last Thursday to leave the European Union. After reading newspapers and watching television news, it would seem that this was not how the British people (and Welsh and Scottish and Northern Irish, etc.) were supposed to vote.

Sometimes, even when fully warned by those in positions of real or imagined authority, voters will nonetheless cast ballots independently. Indeed, all manner of experts predicted that a Brexit from the European Union would cause major economic hardship.

George Osborne, UK’s Chancellor of the Exchequer (equivalent to the Treasury secretary in the U.S.), issued a report on the long-term economic consequences of leaving the EU. The assessment claimed that leaving the EU would cost the average British family over $6,000 (£4,300) a year and, by 2030, shrink the UK’s economy a not-trivial 6 percent.

The Wall Street Journal summed up the government analysis of Brexit: “Britain would be permanently poorer.”

“That’s a fact everyone should think about as they consider how to vote,” Osborne explained.

Government predictions of the future are “facts,” don’t you know.

Yet, the UK pays to Brussels, the EU capital, billions of Euros or Pounds or what-have-you more each year than it receives back in benefits. And that truly is a fact.

I’m no expert, nor chancellor of anything, though I am an ex-checker, or cashier or whatever, and have stayed at a Holiday Inn Express on several occasions (though, not last night). Still, it seems clear to me that Britain was wealthy and prosperous before it voted to join the EU in 1973, and will almost undoubtedly survive, however lessened in the eyes of elites, after canceling its European Union membership card.

And surely independent Switzerland and Norway are doing just fine.

There were obviously numerous issues affecting voters in this referendum, including the EU’s open borders approach to immigration. And the flip side of that coin, the lavish welfare state in Britain, which both encourages immigration and makes it unsustainable.

But two reasons given for voting Leave in a MarketWatch feature story have more direct application across the pond in America: “Reject the Brussels bureaucrat,” and “Reject what the establishment wants.”

The Leave supporters argued that EU regulations, enforced by those Brussels bureaucrats, are “centralizing, regulating and controlling, the opposite of what is needed for jobs and future success,” when the global economy demands that countries “be flexible, adaptable and control their own destiny.”

Isn’t this exactly how many of us feel about the red tape Washington wraps our economy in?

The Brexit vote was also an unmistakable sign of what one British blogger called a “healthy disregard for authority.”

The political establishment in the UK appears to be no less despised than the Washington establishment here in the USA. The more establishment voices favoring a Remain vote to stay in the EU showed contempt for their opposition and piled up doomsday predictions, the less the public bought their story.

Donald Trump was nearly alone among American politicians in applauding the Brexit vote. It dovetails generally with his immigration views. But it also resonates with the very American ideal of political independence.

Americans, like the Brits, cherish citizen control of government and decision-making close to home. Not faux-democracy where unpopular and unaccountable politicians partner with unelected bureaucrats to dictate every minute detail of our lives from far away.

Americans are as sick and tired of Washington, D.C., as the British are of the European Union. Consider what would happen if Americans could vote on separation from D.C. Perhaps our illustrious leaders would leap to provide us with a national referendum on term limits for Congress. Just to forestall how far we might go.