Paul Jacob
|
Posted: Apr 10, 2016 12:01 AM
Share   Tweet
The opinions expressed by columnists are their own and do not necessarily represent the views of Townhall.com. 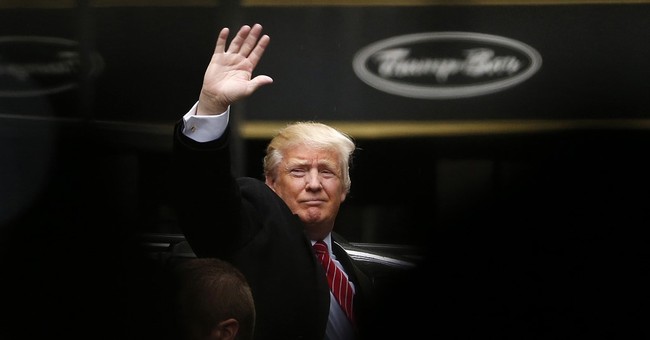 The usual cycle of political disillusion is compressing. We can now have our illusions eroded almost instantly, no waiting.

This election year is unusual in a myriad of ways — not just the surprising success of an avowed socialist on the Democratic side and a billionaire businessman leading on the other, with the socialist never having had a substantive private sector job, and the businessman never having even run for public office before.

Both parties’ current front-runners for the presidential nomination — Mrs. Hillary Clinton and Mr. Donald Trump — are actively disliked by a majority of Americans. We seem virtually assured of not liking our next Oval Office occupant.

From the start, I mean, without benefit of going through a disillusionment period.

Perhaps even more interestingly, the grassroots of both major parties are set ablaze, in open revolt against their over-grown establishment wings, so thoroughly ensconced in the wealth and faux-power of Washington . . . but, of course, this isn’t really new or unique to this election cycle. Except that this time the enormous voter dissatisfaction and frustration have resulted in hotly contested and potentially splintering nomination battles in both parties.

For the first time in four decades, the Republican Party is very likely to choose its presidential standard-bearer at a contested national convention. Mr. Trump’s path to the 1,237 delegates that comprise a majority is very difficult. Sen. Ted Cruz and Ohio Gov. John Kasich have no remaining path, mathematically, to a majority of delegates — whatever their chances for final ballot success, neither can achieve an uncontested first-ballot victory.

It’s even possible, though much less probable, that Democrats will find themselves with a contested or open convention. Hillary Clinton currently holds a slight lead over Sen. Bernie Sanders among delegates won in primaries and caucuses, but a much greater margin once super delegates are thrown in to the totals. These super delegates are the Democratic Party bigwigs — incumbent congressmen, governors, past elected officials, party officials (read: the problem) — and make up more than 15 percent of the delegates overall. Clinton leads more than 40 to one among those super delegates who have pledged to either candidate. Less than a third of Democratic super delegates remain uncommitted.

The goal of politics should be for the people to put in place the sort of government they would like to have, within the limits on government in the Constitution, of course, and the individual freedoms protected by the Bill of Rights.

So, when the “insiders” on the Democratic side, as super delegates, poise  their collective thumbs on the scale to swing a party nomination contest against the candidate most people have voted for, that doesn’t seem like an effective or particularly “democratic” nominating system.

Democratic Party defenders argue that, historically, super delegates have never voted against the wishes of most primary and caucus voters. But why have a system whereby the party higher-ups can tilt the voters’ decision?

It’s as undemocratic as the Electoral College.

This problem echoes loudly on the Republican side. When one person, say Trump, wins a primary that has been promoted to the voting public as the opportunity to decide the awarding of delegates, and the person who comes in second gets more delegates than the person, say Trump, who wins . . . well, it doesn’t seem like how elections should work.

Except for one thing: the Republican Party and the Democratic Party are private organizations, who should be able to make their own rules about their own party’s nomination process. We don’t want our political parties to be part and parcel of the government.

Now being private doesn’t mean that the voting public as a whole has to approve of how a particular political party runs its affairs. Nominate an unpopular candidate and lose. Nor should state taxpayers be forced to cough up the cost of primary elections — as is presently the case. Especially when the results of those elections can simply be dismissed by the private party.

One person who gets the proper role of political parties is Eric O’Keefe, an activist for citizen self-government. In recent years, O’Keefe gained a name for his heroic and successful battle against out-of-control campaign finance police in Wisconsin, as head of Wisconsin Club for Growth. He has been a key player in numerous issue campaigns and played an especially important role in the term limits movement of the 1990s.

He’s affirmatively excited about a contested convention. Asked by the Wall Street Journal’s Kimberly Strassel if that wouldn’t be choosing the presidential nominee in the proverbial smoke-filled backroom, O’Keefe volleyed back, “And what’s wrong with that process? It worked well. Those rooms were full of engaged citizens — people who had an interest in the success of their party and their country. They vetted the nominations, they imposed accountability, they shook up the system.”

O’Keefe believes the country was better served when the grassroots, rank-and-file party members had more power over party politics and incumbent politicians. That is, before state governments began to regulate and subsidize and control and merge with the incumbency-wings of the two major parties.

“I’m interested in self-governance,” he told Strassel, “in having people learn what it is that they own, and then exercising that power. Our citizens have been turned into spectators — it’s what the left wants.”

It behooves the parties to find ways to listen to the voters, so as to win elections. It also behooves freedom-lovers to separate the government from the political parties.

O’Keefe is not advocating insider wheeling and dealing, but that the Republican Party membership rise up and “practice a great national tradition, to exercise their legal, historical right to defeat a man who opposes most of what they believe in, and instead nominate a candidate who represents them.”

That candidate opposed by O’Keefe is Donald Trump. “I hate bullies, and of late I’ve come to hate them more,” says O’Keefe, who argues that, “Trump means institutionalized bullying. Tyranny grows from ambitious people grabbing whatever levers of power are available.”

Instead, Mr. O’Keefe wants the Republicans convening in Cleveland this July to take a firm hold of the levers and give voters a better choice.

That is, he urges Republicans in convention to assert their rights as Americans, to freedom of association. If Republicans want to throw off the chains of the bipartisan establishment, they will have to do it in their own association — party — first.

Otherwise, disillusionment is going to grow to gargantuan proportions as the election year unwinds.