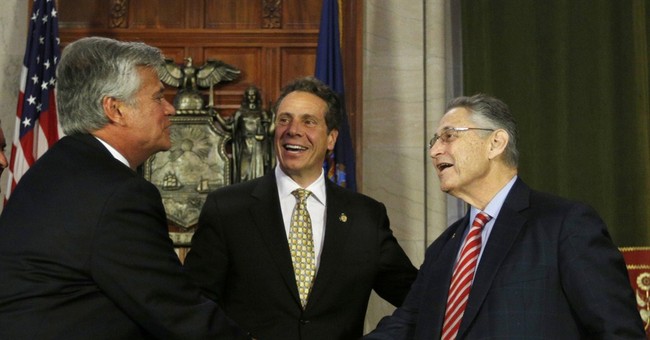 In the 15 states where voters have enacted term limits for their state representatives and senators, those politicians — along with the lobbyists and heads of powerful interests seeking the favor of those politicians — constantly complain that the limits are a big problem.

I know they’re right. In fact, that’s why I like term limits.

Admittedly, I’m a broken record on the subject, but let me turn to a different type of record: criminal.

“Are term limits good ideas for Pa. elected officials?” asked a Newsworks.org headline earlier this month. The article followed in the wake of Steve Reed, the former 28-year mayor of Harrisburg, Pennsylvania, who had been “arrested on nearly 500 criminal charges that included corruption, theft, bribery and dealing in proceeds of unlawful activity.”

A PennLive.com editorial called it “a textbook lesson in what happens when one man, answerable to almost no one, stays in power for entirely too long.”

I call it yet another argument for term limits.

In the lengthy 499-count indictment, the prosecutor in the case detailed that Reed’s alleged criminal misbehavior stretched back two decades. Do the math: the public apparently received eight corruption-free years before the man turned into a power-seduced bad guy.

That really puts an exclamation point on the old “Eight is Enough!” term limits slogan.

If Silver goes up the river, though, he’s certainly not going to be lonely.

The New York Times reports a whopping 26 state legislators have left office since 1999 “because of criminal or ethical issues.” According to Crain’s New York Business, “corruption is a leading cause of turnover in the state Legislature.”

“In most lines of work, an indictment can be a professional death sentence,” The Times acknowledges, adding, conversely, that many “New York State legislators . . . view it as a bump in the road.”

“New York doesn’t so much have a culture of corruption as an entire festival,” Alan Greenblatt explained in his Politico story entitled, “Congratulations, New York, You’re #1 in Corruption.”

Not so fast, however, corruption is a very, very competitive sport.

Way back in 2009, my list of the top three corrupt states didn’t even include New York State. My three were Illinois, Massachusetts and New Jersey. Illinois — well, no one’s going to argue that pick. At that time, Massachusetts had just suffered its third House Speaker in a row to be indicted on corruption charges. New Jersey is known as the Soprano State, and its current governor, Chris Christie, gained fame prosecuting 130 state and local Jersey pols for corruption and convicting every single one.

Funny, all of these aforementioned states have one big, obvious thing in common: a lack of term limits.

Some folks are concerned that term limits will force out “good” legislators just as they are “learning the ropes.” But which ropes, precisely, are politicians supposedly studying — are they learning the job or learning corruption?

The compiled evidence of actual practice seems both ample and clear. And it becomes even more ample and clearer the longer politicians are permitted to entrench themselves in office.

A couple years ago, I joined Greg Upchurch, a St. Louis patent attorney and entrepreneur, at a conference on term limits hosted by the Center for Ethics in Public Life at the University of Missouri-St. Louis. Greg had been the driving force behind the state’s 1992 initiative. He told an audience of mostly academics and former politicians firmly opposed to term limits: the limits are here to stay.

Before term limits were enacted, Upchurch pointed out, two legislative leaders went to prison for corruption. With term limits, there simply haven’t been such scandals.