Compensatory discrimination . . . by any means necesssary 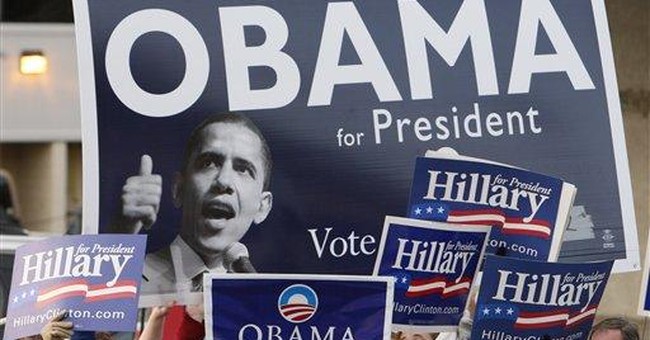 You may think racial and sexual discrimination is (usually) wrong. But whether you call it "affirmative action" or "reverse discrimination," compensatory racial and sex preference remains in wide use by governments and institutions of higher learning, for hiring, contracts, and college admissions.

A man named Ward Connerly has taken up the policy as his to fight. A group calling itself BAMN (standing, amazingly, for "By Any Means Necessary") aims to protect the established policies. Connerly is serious. So is BAMN, whose members fight his measures "by any means" they deem expedient, principle not being their strong suit.

The struggle is at its most heated in Arizona, land of red rock and cactus. Connerly's American Civil Rights Institute has promoted a ballot initiative in that state, and also similar ones in Colorado and Nebraska. It looks like all three measures will appear on these state ballots come November. (Petition drives to put similar initiatives on the ballot in Missouri and Oklahoma failed.)

The idea behind the measures is to make any state contracting policy — or state-supported college acceptance standards — completely race-free. Similar initiatives were voted into law in California in 1996, in Washington in 1998, and Michigan in 2006.

While Connerly is of mixed race ancestry, his opponents allege that most support for his measures comes from white populations. The defense of affirmative action policies, on the other hand, tends to come from some sectors of African-American communities and other minority populations, but most prominently from liberal and leftist groups like BAMN.

Charmingly, BAMN chairwoman Shanta Driver argues that affirmative action must continue until every element of inequality is eradicated from the country. Since inequalities will likely persist as long as there remain distinct races with distinct histories, Driver's favored favoritism resembles John McCain's Iraq occupation, slated to go on practically forever.

The Supreme Court, on the other hand, hopes that such policies will no longer be necessary within 25 years, as Sandra Day O'Connor carefully hedged her support for obviously unconstitutional reverse-discrimination standards.

It wasn't always like this. Our nation began, as history tells us, with startlingly different prejudices. Just think of slavery, which in America was race-based and quite ugly. Slavery was a private crime that was legitimized by state support. It was even half-legitimized (or is that "three-fifths legitimized"?) by the federal Constitution. One could oppose slavery for many reasons; and opponents of slavery came from across the political spectrum. But the central reason, in our country, was a particular conception of equality: not to make people equal, but to respect their equal, shared humanity . . . a different thing.

This kind of equality proves subtle enough to confuse modern liberals. It is equality before the law, and it does not require that we pretend that people have equal talents and interests and passions (they do not) much less to use state power to redistribute wealth to "make them equal" in terms of bank accounts or social status. Equality before the law — an absolutely central notion to our democratic republic — means equally applying the same standard, irrespective of a person's sex, race, wealth, or what-have-you.

Because slavery and sexism contradict the ideals of liberty and equality before the law, slavery and sexism are wrong. Yet now, under compensatory racial and sexual preferences, we're supposed to unlearn this lesson. Why? Because its proponents claim to have good intentions? Even a "good" end ought not be pursued by destructive means.

But I guess that's part of the "by any means necessary" philosophy.

BAMN fires with all barrels against Connerly's anti-discrimination initiatives. In Arizona, BAMN members have engaged in "blocking," harassing petitioners and potential signers ever so creatively. The group is challenging the collection of signatures, and makes repeated (and quite extreme) allegations about "fraud." White citizens who have been canvassed by BAMN activists often mention the guilt trip laid upon them. The suggestion always remains: If you oppose "affirmative action" then you are racist.

Take heart, BAMN targets: The opposite charge is easier to argue. Affirmative action amounts to de facto racism, being based, after all, on racial preferences. Equality before the law is the very essence of the old-time opposition to racism and sexism.

It may interest us to learn that, after the affirmative action standards were made illegal in California, Washington, and Michigan, minority enrollment in colleges at first dipped hard, and then renewed. But, no matter what the statistical results, it's the ethical principle that remains. Our purpose must not be to make people equal — and accept this equality as the "only good result" worth talking about — but to affirm principles that make the still too-common obsession with group affiliation irrelevant. This is the moral high road.

It's about time for Americans to stand up for reason . . . to learn, again, how to discriminate.

Voters in Arizona, Colorado, and Nebraska will have a chance to decide this issue through citizen initiatives placed on their states' ballots this November. They won't express their wills "by any means necessary," they will express them legally, through the democratic process.

I trust they'll vote affirmatively. That is, for equality before the law, which does indeed affirm all — all who would live in peace, freedom and justice.