Paul Greenberg
|
Posted: Dec 12, 2017 12:01 AM
Share   Tweet
The opinions expressed by columnists are their own and do not necessarily represent the views of Townhall.com. 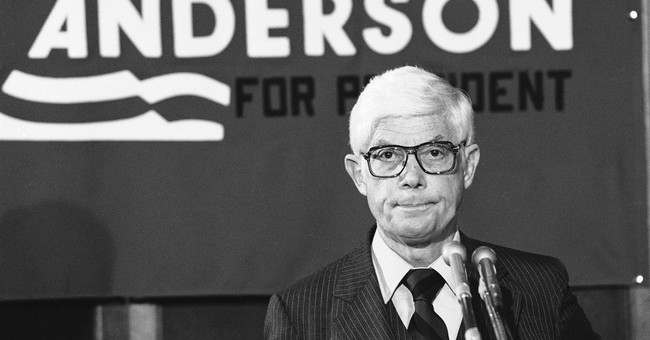 There are any number of lessons to be learned from the almost forgotten life of John Anderson, the late congressman from Illinois. Dead at 95, he represents something of a puzzle to those of us still trying to figure him out.

He was entirely too convenient a choice for those of us who swallowed the line about Ronald Reagan's being entirely too radical a choice for the country to make for president in the deeply divided election year of 1980. But by then the Democratic incumbent, Jimmy Carter, had already demonstrated his incompetence, however mixed it was with occasional flashes of idealism. Which way was the American voter to turn?

At first everything seemed to be going well for the attractive candidate from the Land of Lincoln, but as it turned out he never finished better than second in any GOP presidential primary. He wound up losing the presidential primary in Illinois despite his popularity with young people. Instead the voters turned against him in favor of candidates they believed could succeed. So he jumped the party's ship and chose to run as an independent candidate for president, which may have been his fatal political error. Voters said they liked him, but when it came to casting their ballots, it turns out that they preferred a candidate who could win. Come Election Day, he got only about 7 percent of the national vote.

A man of strong beliefs, he stuck by them throughout the campaign, picking and choosing his battles. He endorsed President Carter's embargo on grain sales to Russia after it invaded Afghanistan. And he called for a gasoline tax of 50 cents a gallon--when a gallon of gas cost a grand total of $1.15 -- in order to save energy. He lost, however prescient and economical his stands look in hindsight.

To quote Adam Kinzinger, the staunch Republican who now represents John Anderson's old congressional district in Illinois: "He believed that his job was worth giving up in order to set a better example of realism in politics. We are better for his candor, his focus, and his honesty."

But not for his untiring ambition. A lot of his fellow citizens loved him, but not so much as it turned out he loved himself. For he was too eager to swallow his own picture of himself as an uncompromising idealist. Idealism, it turns out, carries with it the seed of its own political destruction. There is a time to compromise, and John Anderson never seemed to recognize it. He was a loner all too often.

Of the wealth of lessons John Anderson's political career should teach us, our favorite remains: Now is the time for all good men and women to come to the aid of their party. At the moment of truth, John Anderson forgot that ours is a two-party system, not a one-party or multi-party. Seduced by his own vanity, he refused to compromise and settle for the system of the ins and outs so that the people of the United States would know where the responsibility of governing lay. He rejected clear lines of authority and responsibility. It was all just too humdrum for his tastes. He rejected the good and workable, preferring the ideal to the practical. And a government that works simply can't afford that kind of perfection, instead of the ordinary business of making deals and getting on with it.

There is such a thing as asking too much of mere politicians instead of politics without flaw or blemish. There is something to being too good for the rough and tumble of American politics -- and that was John Anderson's besetting sin.

So give us a sensible, workable pol any day compared to the politician who imagines himself so great that he is always falling short of his own too-high standards.