Paul Greenberg
|
Posted: Jun 28, 2017 12:01 AM
Share   Tweet
The opinions expressed by columnists are their own and do not necessarily represent the views of Townhall.com. 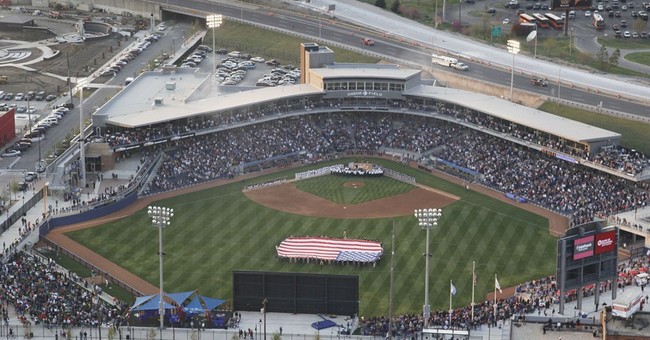 Organ music belongs in great cathedrals. And what better or older American cathedral than a minor-league ballpark like the one in North Little Rock, Ark., with its little retro bandbox of a ballfield? That's where the Arkansas Travelers take on all comers in the AA Texas League to musical accompaniment provided by 29-year-old Trey Trimble, who takes the crowd back to an older, more innocent time.

That's where organ music belongs. To hear it on the radio may only inspire the natural question, "Who's dead?" The answer is nobody, at least not while the crowd roars its way through another scorcher of an Arkansas evening. For there's still something almost as magical as it is nostalgic about a game of baseball being played in an American city of modest proportions -- not too big, not too small, but just right.

The management did offer Maestro Trimble a seat in the air-conditioned press box high above the madding crowd, but he politely declined the honor. He preferred to stay down below where he could hear the crack of the bat against ball as paying fans gather 'round him sipping beer and taking bites of ballpark hot dogs. "It's a good feeling," says the ballpark's organist, "knowing that people can see this. There's a little bit of pride for me, them knowing that I'm actually playing."

Young Trimble is a member of an endangered species as one smaller baseball club after another has let its organist go, another victim of times that are changing, but not for the better. Out of 160 minor-league teams, only six are left with professional organists like the Travelers' one-man band. Those who decided to go organless have a variety of excuses for it, but no good reason. Like saying fans want "more modernized entertainment" or their ballparks lack "space and manpower" for organ music or just had "no specific reason," which is at least an honest response. For what once was the national pastime has given way to other sports. Which is not a good sign for the state of the Union.

All of which is all the more reason to go to the ballgame and cheer for the home team. So let's hear it for ball clubs like the Rochester (N.Y.) Red Wings of the Class AAA International League, whose organist (Fred Costello) is 75 years old and a master of his soon-to-be antique craft. While here in Greater Little Rock, Trey Trimble is paid only enough "gas to get there and back," Mr. Costello pulls down the munificent sum of $77 a game. He's got the longest tenure of all. Come this Fourth of July, Lord willin' and the creek don't rise, he'll play at his 3,000th ballgame. He's the Iron Man of baseball organists. Congratulations and many happy returns -- for both you and your ball club. You've got the right spirit when you say that "if you stay ahead, you stay on top of it." And he's the tops.

Along with your ticket to see the Class AA Fisher Cats in New Hampshire or the Salem Red Sox in Virginia, you get only computerized organ music, which just ain't the same. The computer may never hit a wrong note, but the suspense and spontaneity of a live performance is gone. "There is a romance to baseball's yesteryear," says 31-year-old Ben Gellman, who's the team's radio broadcaster. "Part of that is the music. and an organ is inextricably connected to that. There's the distinct sound that an organ can bring. It's a bit of romance and energy." Sometimes the romance leaves the ballpark when the organist does, and returns only when live organ music does.

Look at the varieties of musical experience Erin O'Donnell has experienced since she began as a marketer with the Class AA Corpus Christi Hooks in 2004, when that team didn't have an organist to cheer it on. But a couple of years later, as she was walking through the concourse of the Class AAA Memphis Redbirds' field, she heard an organ pound out Looney Tunes as the ball boys chased down foul balls in the outfield and was hooked -- and prepared to hook others. It was there that she met organist Bill Krieger, who's retired since and left no successor. All good things come to an end -- till someone like Erin O'Donnell comes along and revives them despite the considerable odds. Now she's the director of marketing for the Class AA River Cats in Sacramento, who do have a very live organist.

Ms. O'Donnell takes it as her professional mission to understand the vibes of her new locale and translate them into sound. A live organist "really makes a difference," she says. "There's definitely a difference in nostalgia, that classic baseball feel. And the organ gives you that timelessness of the game." For a ballgame is still governed not by any ordinary clock with its seconds and minutes and hours, but by the timeless clock of runs, hits, errors and innings. Now let's play ball!