For Whom the Bell Still Tolls

Paul Greenberg
|
Posted: Apr 19, 2016 12:01 AM
Share   Tweet
The opinions expressed by columnists are their own and do not necessarily represent the views of Townhall.com. 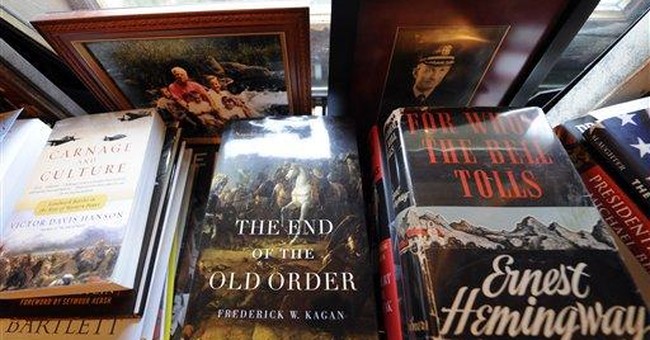 Don't look for any happy ending here. Or any ending. The debate over the Spanish Civil War (1936-39) can be expected to last as long as there are isolationists and interventionists arguing over American foreign policy -- that is, approximately forever. Few if any conflicts illustrate the tragic nature of history so well, for there were no simple choices in Spain. There were more than enough heroes and villains, not-so-innocent bystanders and gawkers galore -- along with an endless supply of impossible choices. No one's hands were Ivory Soap clean, but curiously enough none were hopelessly dirty. Time, the great judge, has yet to speak and probably never will. Welcome to sunny Spain.

In 1936, Spain had a newly elected republic fighting for its life. These loyalists started off with the support of the country's workers, labor unions, artists and intellectuals of every assorted stripe. Then there were the nationalists who could see nothing in this admixture but a bunch of godless Communists out to dominate first Spain and then the world. Both sides claimed to be pure; neither was. Both sides claimed to be idealistic, and improbably enough were, in their way. For if politics makes strange bedfellows, war can make stranger ones. Both were as pure as the driven slush, yet each had a conscience, or a version thereof.

What more is there to say? Plenty. For each side could debate its merits and the other side's demerits forever without ever reaching a conclusion. Each attracted dubious allies. The Republicans' cause was supported by Stalinist Russia, which contributed a steady flow of volunteers -- some 40,000 by one estimate -- while Nazi Germany and fascist Italy dispatched whole armored divisions and flights of dive bombers to bolster the nationalists' ever encroaching lines around Madrid.

Out of this wild melange of armies and militias came one masterpiece -- George Orwell's "Homage to Catalonia" -- but all the rest was pretty much propaganda, including a Hollywood production starring Gary Cooper. Yes, there was also Ernest Hemingway's novel, "For Whom the Bell Tolls," but it sounded like a poor if literal translation from the Spanish. (Talk about having no ear for literary fashion; it was all the rage when it first appeared, and may still be among those who consider it a classic.) Yes, the war inspired Picasso's "Guernica" and some of Auden's poetry, but it was also the force behind Neruda's.

As for the war itself -- oh, yes, that -- in the end General Franco's nationalists would finally succeed in establishing a military dictatorship that would last for generations. Once again might made right, or at least victory. It also succeeded in showing Hitler he had nothing to fear from the decadent democracies of his time and could proceed to invade Poland at his leisure, inspiring the cynical Nazi-Soviet Pact and igniting the Second World War. The United States was largely immobilized by the neutrality acts Franklin Roosevelt had backed; that president wound up playing the same role Barack Obama does today, reduced to just watching as evil spread -- often enough with his active encouragement.

The good gray New York Times played both sides of the street and called it objective journalism, a euphemism for letting its comsymp correspondent, Herbert Matthews, echo the Communist Party line while its separate but equally partisan William Carney performed the same service for the fascist cause. Both sides wound up fighting it out in the streets of Barcelona and Madrid while Orwell and his wife fled for their lives.

If you seek any monument to the war, it might be Franco's miles of statuary in his Valley of the Fallen, a morbid sea of pavement and plazas. It's still not clear which side will emerge the winner a century hence, for history takes its bitter time deciding such questions. Or as enigmatic Chou-en-lai said when asked what was the party's current line on the French Revolution decades ago: It's too soon to tell. History will not be hurried, and the bell still tolls for those who ignore it.