Paul Greenberg
|
Posted: Mar 16, 2016 12:01 AM
Share   Tweet
The opinions expressed by columnists are their own and do not necessarily represent the views of Townhall.com. 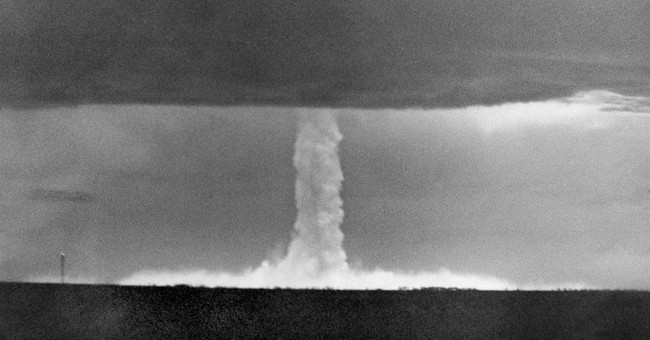 Long before nightfall the rain was coming down in welcome waves, filling the view from the bay window, flowing down the driveway like a little river. The coffee was on, the newspapers had been long read and the world was being held at bay for once. A watery recess had been declared as all the day's preoccupations were set aside.

There are two kinds of people in the world, a common enough division when it comes to describing people's reaction to all kinds of things. Count me among the pro-rain faction. Maybe because it clears the air, eases allergies and slows time.

But what is a rainy-day holiday for some is a headache for all the people who have to deal with flash floods. Word comes from Benton that the Saline River was expected to rise up to more than 12 1/2 feet, making old Noah feel right at home. The Army Corps of Engineers had already lowered water levels at lakes throughout the state in readiness for the approaching storms.

Quite aside from all the technical details that have to be managed in preparation for a storm, for some of us there is just the drama, the romance of it. It's hard to think of stormy weather without recalling Thomas Merton's tribute to it, for the man was not only a monk but something of a poet:

"I came up here from the monastery last night, sloshing through the cornfield, said Vespers, and put some oatmeal on the Coleman stove for supper. It boiled over while I was listening to the rain and toasting a piece of bread at the log fire. The night became very dark. The rain surrounded the whole cabin with its enormous virginal myth, a whole world of meaning, of secrecy, of silence, of rumor. Think of it: all that speech pouring down, selling nothing, judging nobody, drenching the thick mulch of dead leaves, soaking the trees, filling the gullies and crannies of the wood with water, washing out the places where men have stripped the hillside! What a thing it is to sit absolutely alone, in the forest, at night, cherished by this wonderful, unintelligible, perfectly innocent speech, the most comforting speech in the world, the talk that rain makes by itself all over the ridges, and the talk of the watercourses everywhere in the hollows! Nobody started it, nobody is going to stop it. It will talk as long as it wants, this rain. As long as it talks I am going to listen."

Soon the soup was on and the stage set for a long rainy day that might as well have been forever for those of us who are housebound -- but now felt ourselves free and footloose. It was like getting a rain check for the big game, or cashing in a rainy-day fund.

The volumes filling the bookshelves now begged to be read, especially those we'd read and relished before. What's the good of reading and savoring a book only once if you'd enjoyed it before? Maybe you've missed something. Gibbon's saga detailing the fall and decline of the Roman Empire called out to be read again. So did Henry Adams' chronicle of his education. And the republic's. There is a peculiar charm to decadence that cannot be denied.

Rainy days were made for such books, as I suspected I was, too. What depressed others only cheered me. To sit in front of the fire, listen to the rain fall, thumb through the pages of a favorite volume, think back on absent friends and toast their memory ... is there anything finer? The emails could wait and so could everything else. The rain, and savoring it, came first. It was hard not to wish it would go on forever. Which is just what it felt like it was going to do. You have a good rainy day, too.