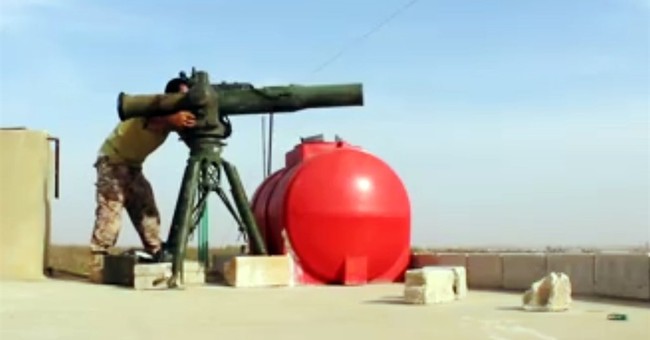 " 'Act of war,' Hollande says," blared the front-page headline -- even before the attacks on Paris had ceased. It was all a revelation to France's president, as if the West had not been at war for some time against this latest wave of jihadists to sweep out the Middle East -- just as Islam itself had swept out of Arabia's sands and conquered much of the known world centuries ago.

Now the great conquest continues, this time via the Islamic State/ISIS/ISIL/the Caliphate or whatever Islamic fundamentalism calls its latest historic manifestation of so many. Yet it's all breaking news, not history, to the West. Such is our ignorance, for we have long ignored the first rule of war and survival in this world: Know Thy Enemy -- and we don't. On the contrary, we scarcely suspect its existence. Till one day it appears in the very heart of the West to overrun our defenses and turn the City of Light into a city of horrors.

It might help to review British historian Michael Cook's summary of the appeal Islam held and still holds for the faithful:

"It was the fusion of this egalitarian and activist (Arab) tribal ethos with the monotheist tradition that gave Islam its distinctive political character. In no other civilization was rebellion for conscience sake so widespread as it was in the early centuries of Islamic history; no other major religious tradition has lent itself to revival as a political ideology -- and not just a political identity -- in the modern world."

The West has known no such combination of theological sophistication and militant appeal since the Puritans brought their beliefs to this new world in the 17th century -- or, for that matter, the newly freed Israelites came out of Egyptian bondage to conquer Canaan long before. Numbers do not matter in such a struggle; cohesion and a sense of divine purpose are all.

Yet none of this seems to have made the dimmest impression on the West's leaders today, who tend to dismiss this renewed invasion from the East as only an outbreak of terrorism, another episodic instance of barbarians rising against the West from out of nowhere. Such is our ignorance, so instinctive that we don't know even what we don't know.

This is scarcely the first time the Islamic conquest has come to sporadic life. Back in the 19th century, at the height of European imperialism, these Holy Warriors arose to sweep through Africa under the inspiration and leadership of a succession of Mahdis, or messiahs, who toppled every colonial outpost in their way, and claimed the lives of noted Western commanders like Britain's "Chinese" Gordon, who fell victim to the Mahdi when Khartoum fell in 1885 -- which also came as a shock and surprise to a regularly stunned West.

It took leaders like Lord Kitchener at the head of a British force of some 8,000 (supported by Egyptian and Sudanese legions) to turn that blood-red tide at Omdurman in 1898, not to mention dashing figures like young Winston Churchill on horseback. But all that history is now forgotten -- if it was ever learned in the first place by a congenitally ignorant and therefore constantly surprised West, whose leaders seem under the impression that the world begins anew with every sunrise. And to be ignorant in this world is to be ever vulnerable.

The next Western city to be assailed after Paris -- London? Berlin? New York? Who but our enemy knows? But this much is certain: These new Mahdis are already planning their next offensive -- even while the West sleeps on, rocked by an occasional shock like the storming of Paris this past weekend, but unaware that it isn't just a singular event but part of a continuing pattern. Santayana said it: Those who cannot remember the past are condemned to repeat it. Again and again....