The Truth Will Out 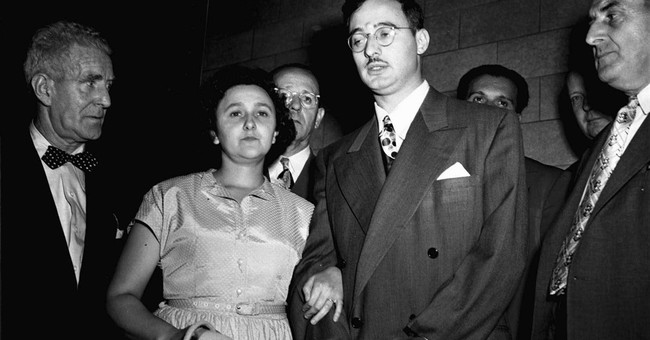 "The long unmeasured pulse of time moves everything. There is nothing hidden that it cannot bring to light...." --Sophocles

Call it a footnote to history. It's 46 pages long, but till now it's been kept under wraps: the testimony of David Greenglass before a grand jury some six decades ago on August 7, 1950. It doesn't contain any surprises. It's been known for some time that his testimony against his sister, Ethel Rosenberg, was false. A frame-up. He admitted it in a newspaper interview before he died, and explained why he'd ratted on her: to save his own skin. She was just a scapegoat for his own crime.

The release of David Greenglass' grand jury testimony by order of a federal judge -- at the request of various historians eager to wrap up all the loose ends for the record -- further confirms his perfidy. Not because of what it contains, but because of what it doesn't: any indication that his sister Ethel was guilty of the crime for which she was convicted -- and executed -- along with her husband Julius.

But by the time of the trial, egged on by federal prosecutors hell-bent on a conviction, David Greenglass would testify against his own sister, saying she had typed up the notes when he delivered atomic secrets to Soviet agents.

Summing up its case at the end of the trial, the prosecution charged that Mrs. Rosenberg had "struck the keys, blow by blow, against her own country in the interests of the Soviets."

Ethel Rosenberg may not have been wholly innocent -- she was part of her husband's spy ring and doubtless knew what was going on -- but it's clearer than ever now that she wasn't the one who typed up those notes.

That's not what the jury heard from the government's zealot of a prosecutor, Irving H. Saypol, who could have been Andrei Vishinsky leading the charge against all those old Bolsheviks put to death in one of Stalin's show trials. Ethel Rosenberg, the prosecutor declaimed in grand style, was fully deserving of the death penalty because she'd typed up her brother's notes. ("Just so had she, on countless other occasions, sat at that typewriter and struck the keys, blow by blow, against her own country in the interests of the Soviets.") Off with her head!

Ethel Rosenberg's having typed up those stolen secrets became the central accusation against her, and certainly the most emotionally resonant one. It was the linchpin of the government's argument for putting her to death. And the jury bought it.

Both of the Rosenbergs, duly convicted, would be executed at Sing Sing on June 19, 1953. Despite worldwide protests from Paris to Moscow organized by the Communist Party and its fellow travelers, who were always on the lookout for a good cause celebre, however inflated or short-lived, before moving on to the next subject of their agitprop. In the meantime, the Rosenberg case made fine fodder for America's enemies.

It wouldn't be the first time our Justice Department showed a disregard for justice. That pattern scarcely began with the present administration, which has only continued it, not inaugurated it. There is no shortage of precedents, legal and historical, for scandals like Fast and Furious or the IRS' selective tax exemptions.

High among those injustices has to be the execution of Ethel Rosenberg on the dubious testimony of her own brother. It's become clearer and clearer over the years that she wasn't the one who transcribed those notes of her brother's, the most inflammatory accusation against her.

But the truth has a way of outing, however long it takes. More and more of it is revealed as the years pass. Now it's happened again. And the moral standard of another historical figure has been confirmed. And in David Greenglass' case, it was the lowest.