In Greece's Tribulation, Shades of the 1930s 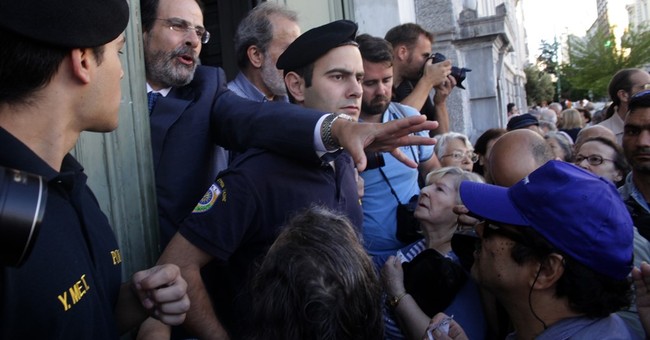 How little things change -- and how a lot does. It may all depend on leaders -- their quality, their vision, their temperament. The scenes in Greece would be familiar to any American caught in the low ebb of the Depression, like the panicky lines of depositors trying to get what's left of their money out of shuttered banks. It could be the United States in March of 1933 complete with a bank holiday in effect, and all wondering what happens next.

But there's a difference: This country had a leader. Franklin Roosevelt took the reins as soon as he was inaugurated as president. Calm, confident, determined, he used that new medium, radio, to assure Americans that this nation would endure as it had endured. Of course it would. Because he would see that it did. FDR not only declared a federal bank holiday but used the time it gave him to reform the country's banking system, insuring depositors' money and restoring their confidence.

Oh, yes, FDR's New Dealers also passed the Glass-Steagall Act that separated ordinary, commercial banking from the kind of rampant speculation that had led to The Crash of 1929 in the first place -- and the Great Depression that followed in its wake.

Glass-Steagall would protect the American economy for decades -- till a thoughtless Clinton administration and some of its equally irresponsible Republican allies repealed it, inviting the Great Recession. You'd think we would have learned better. We hadn't. What we learn from history, it's been said, is how little we learn from history.

In 1933 the country was desperate, and would have gladly given its new president dictatorial powers to do whatever he thought best. What he thought best, however, was to save American democracy, not destroy it. Or walk away and take no part in its decisions.

There's the difference between America then and Greece now. Its feckless "government" has simply passed the buck to Greek voters, urging them to reject the very referendum it proposed. Result: Greek voters are left to decide today whether to buckle to the European bankers' demands or risk leaving the European Union with its euro altogether, going back to the drachma, and having the country make its own economic decisions.

Economic independence would be hard; it always is. It would be uncertain and challenging, and there would be no guarantees of success or stability. But living on the sufferance of others, obeying orders from Brussels, letting others determine the value of their national currency. ... Well, all Greeks have to do today is look around at the chaos and confusion that has enveloped their country to see the folly of letting others dictate their economic future.

When the European Union, with its central bank and euro, were still young, a far-sighted Englishwoman named Margaret Thatcher could see where all this was heading. That long-serving prime minister, who finally succeeded in turning the British economy around, was never fond of playing games with the currency or with obdurate economic truths in general.

The Iron Lady preferred to face reality head-on, and do the hard work necessary to save the old pound sterling instead of devising a new and suspect currency backed by -- well, what does back up the euro, if anything? Or aren't we allowed to ask? Maybe not. "Pay no attention to that man behind the curtain," as the Mighty Oz told Dorothy.

Lady Thatcher wasn't about to be bluffed. As she warned long ago, the poorer countries in the Eurozone would come to expect the richer ones to bail them out whenever they ran up debts they couldn't afford, and eventually the countries with assets -- like Germany and Britain -- would tire of this game.

A central European bank, she foresaw, would supplant national parliaments and use a single currency to subsidize weaker economies at the expense of stronger ones. A single European union would also undermine and eventually replace the national sovereignty of individual nations, and lead to a general loss of independence and democratic rights in state after state.

Europe is just too diverse in its economies and cultures in general for countries as different as Britain and Greece, Germany and Portugal, to share the same economic system without continual crises. To quote one astute observer not long ago, "It's one thing to be kind of generically anti-euro, which a lot of people in England have been. It's another thing to absolutely nail why the euro would be such a disaster." Which is what Lady Thatcher did long before this latest crisis struck.

But her warnings were ignored. It's happened to many a prophetess since Cassandra -- and now the first domino in this row shakes and shudders. And the world waits and watches and wonders how long this game can last.