A Scar On The Calendar 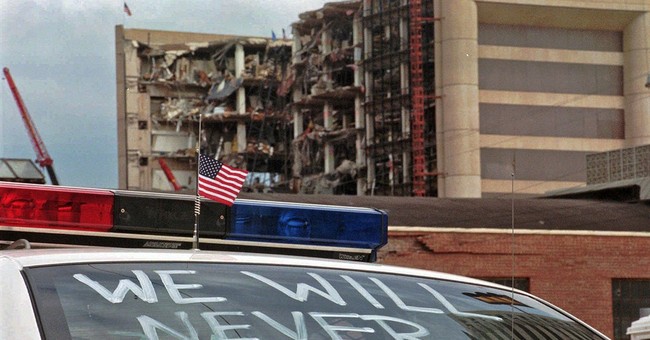 April 19th has come again this year, but it never quite goes. How can it? It stands out like a scar. It may no longer be the bleeding wound it was on that first April 19th -- except to those who were there and in a way still are. And can never leave. Their lives, their families, even their memories will never be whole again.

The explosion that tore through the Alfred P. Murrah Federal Building in Oklahoma City, reducing it to a burned-out hulk, left more than an unforgettable stench in the air. It left a gaping hole in the American consciousness. It was a spiritual blow, which is why rituals like Sunday's in Oklahoma City are necessary and will be necessary -- like lighting a candle for the dead or saying the kaddish on the anniversary of a death in the family.

Ron Asbill was there that first April 19th. A first responder, they call those like him -- one of those blessed types who hurries to do whatever they can to help in the midst of the unspeakable. First victim would be more like it, for he, too, can be numbered among the casualties. The spiritual casualties. For years he couldn't even go to the commemorations. Memories came flooding back. His knees buckled. He turned back. He knew even years later that he had to get away.

When he got to that awful sight 20 years ago, Ron Asbill -- who lives in Siloam Springs, Ark., now -- saw the police officer first. The cop was crying on the back of his patrol car. Sirens were still sounding, screams still pierced the air. Mr. Asbill was an EMT (emergency medical technician) and you'd think he'd be used to such sights by now. You'd think wrong. You never get used to it, and Ron Asbill certainly isn't over April 19th. How could anybody get over it?

Turned back from the still smoldering remains, Ron Asbill made it to the hospital, where a man asked him to help unload some black nylon body bags from the back of a truck. "I grabbed it, and I was expecting it to be heavy. When I picked it up, everything went to the middle," Asbill said, pausing to regain composure. "So we carried those into a dark room off the side of the street there. Makeshift morgue. Seven kids."

No, you never get over it. To quote LaDonna Battle, who on Sunday was standing between two of the 168 memorial chairs, one for each of those who had perished there. These honored her mother and father, who were at the Federal Building that day to fill out some paperwork for their Social Security benefits. "We're completing a journey with steel hearts," she says. "We're rebuilding our lives."


All wish the lady and her family the best, which would surely be to forgive. But how forgive the unforgivable?

There is another April 19th on the calendar -- two years to the day before Timothy McVeigh chose that anniversary to exact his pitiless revenge at Oklahoma City -- with the usual pointless result. "Revenge is Sour," to quote the title of an essay by George Orwell, who knew.

The massacre at the Branch Davidian compound outside Waco, Texas, took the lives of 76 members of a religious cult -- all either buried alive or suffocated by the effects of the fire that broke out when a raid went tragically wrong. Including 17 innocent children.

Only that April 19th wasn't the work of a lone lunatic, but the misguided result of a concentrated effort by masterminds at the White House like Attorney General Janet Reno and "Judge" Webb Hubbell, who had once served as a special judge in Arkansas, and took that empty title with him when he went to Washington as part of Team Clinton.

Incompetence, it turns out, can prove as homicidal as malice. This current administration might keep that in mind as it retreats in the face of evil across the globe -- in the Middle East, Eastern Europe and beyond -- or even collaborates with it.

It won't do just to remember and commemorate the April 19ths. We must learn from them. Hard as that will be to do. But we must try. And not just every April 19th.