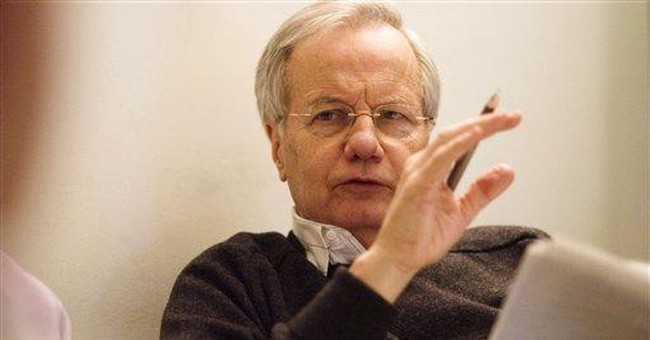 Journalism has thrived on scandal since there's been journalism. For who except a saint wouldn't take vicarious pleasure in reading about how the mighty have fallen? Especially when pride, as usual, has gone before the fall. Maybe saints don't read the papers, but we lesser mortals may not consider our morning coffee complete without a look at the headlines. And when it comes to scandal, some of us don't just scan the headlines but devour every word. Consider that a confession.

Naturally the Germans would have a word for it: Schadenfreude -- taking pleasure in the troubles of others. It's not an ennobling emotion, but it's an all too human one. No wonder scandal sells. Asked to say just what news is, a long-time British newspaper publisher -- Lord Northcliffe (1865-1922) -- offered this concise definition: "News is what somebody somewhere wants to suppress; all the rest is advertising." Which helps explain why journalism is so taken with the scandalous, and, some would say, is a scandal itself.

What adjective but scandalous would best sum up an occupation so dependent on keeping up with the foibles of others, and then broadcasting them to the world? Especially when they involve one of our own, like a network anchorman or just the kind of hack who specializes in a brand of character assassination that would make a Joe McCarthy blush. Top it off with a heaping helping of self-righteous hypocrisy and you've got a perfect example of the decline and fall of journalism, if indeed it ever had a rise.

The annals of American journalism are full of scandalmongers, from James Thomson Callender in Jefferson and Hamilton's time to more recent types like Walter Winchell, not to mention the kind of character assassins who keep showing up in every era.

Today's media scapegoat is poor Brian Williams, who may be guilty of nothing more than exaggerating his exploits the way any of us do when, having adjourned to the little bar around the corner, proceed to trade stories with other newspaper types about our heroic adventures, which become more heroic with every telling. I know mine do with every single-malt Scotch.

But the Brian Williamses of the journalistic world are pikers compared to those who spin whole fantastic stories day after day, complete with dubious documents, when they target a president of the United States like George W. Bush, and wind up being exposed themselves. See poor, self-deluded Dan Rather, who is no longer the most watchable anchorman on television. In the end he was reduced to defending the documents he'd relied on as "fake but accurate" -- a classic phrase that has entered the American lexicon of non-sequiturs. So does partisanship blind us to simple fairness.

Some of these highbinders wind up in high places indeed, like on the staff of a president of the United States. Brian Williams' fishy stories pale in comparison to a lifelong expert at fakery like Bill Moyers, who's made an entire career out of low tricks and high rhetoric about how fine, ethical and politically correct he's always been.

The other day Mr. Moyers took typical umbrage at a docudrama -- "Selma" that failed to give his old boss, Lyndon Johnson, sufficient praise. Even if that president could indulge in some tactics as low as some of his causes were high -- like civil rights. Bill Moyers, however, went into full-indignation mode in response to the movie, though some of us were never fooled by his pose as a great idealist -- and still aren't.

A talented young reporter named Andrew Ferguson, who was writing for the New Republic at the time, blew the whistle on Mr. Moyers decades ago:

"As the (White House's) campaign against King progressed, FBI Director J. Edgar Hoover routinely forwarded to the White House summaries of the King wiretaps, which were placed not only in King's home and office but also in his hotel rooms around the country. The summaries covered not only King's dealings with associates but also his sexual activities. After receiving one such summary, Moyers instructed the FBI to disseminate it widely throughout the executive branch, to Dean Rusk, Robert McNamara, Carl Rowan and many others. Moyers was also aware at the time of Hoover's efforts to leak the King material to the press."

A humble and straight-talking journalist (if that's not a contradiction in terms) named Morley Safer knew better than to swallow Mr. Moyers' pose as some kind of moral crusader. To quote his memoir: "I find it hard to believe that Bill Moyers would engage in character assassination. ... But I confess, I find it harder not to believe it. ... His part in Lyndon Johnson and J. Edgar Hoover's bugging of Martin Luther King's private life, the leaks to the press and diplomatic corps, the surveillance of civil rights groups at the 1964 Democratic Convention, and his request for damaging information from Hoover on members of the Goldwater campaign suggest he was not only a good soldier but a gleeful retainer feeding the appetites of Lyndon Johnson."

It's easy enough to find examples of the low art of gotcha journalism in politics left or right, but Mr. Moyers stands out as the phoniest of phonies. What's missing from his kind of journalism isn't just humility, accuracy and all the other virtues they preach in journalism school, and that are soon enough forgotten in the mad race for scoops and "professional" advancement. What's also missing is something that isn't easy to define but, like excellence or pornography, you know it then you see it. Call it character.

Bill Moyers' long career has been a palpable combination of low vulgarity and high pretense. Ours is a time when commentators, including newspaper columnists and editorial writers, may be chosen on the basis of whether they reflect a certain viewpoint or demographic. ("What this opinion section needs is a representative of the liberal/conservative/black/white point of view to give it balance.") What's missing from this low calculus is whether the writer can reach a thoughtful, considered opinion of his own without pandering to the gods of a particular race, creed or class -- and maybe even change his mind as he grows in experience and, let's hope, wisdom.

What's missing, and what memorable newspapermen -- and women -- of the past had, was a capacity for greatness of vision, maybe even of soul. It's what the great spirits of journalism past, the George Orwells and William Allen Whites, the Rebecca Wests and Martha Gellhorns, the likes of Dorothy Thompson and Whittaker Chambers, exemplified. Their work went beyond journalism into literature -- if that's not too grandiose a conceit.

The greatest and most appealing journalists had something else -- a humanity and humility and universal appeal. This April will mark the 70th anniversary of the death of Ernie Pyle, the beloved war correspondent who brought all the sorrow and pity, the heroism and waste, of a worldwide conflict to the folks back home, dispatch after dispatch, until he raised his head once too often for a look-see, this time on some godforsaken Pacific atoll, and was shot dead by a Japanese sniper. Those twin personifications of the spirit of the American GI in that war, cartoonist Bill Mauldin's Willie and Joe, still live -- in the hearts and memories of those who shared a foxhole with them, if only figuratively. Journalism doesn't have to be a low trade; it can be an art and inspiration.