Death of a Bounder 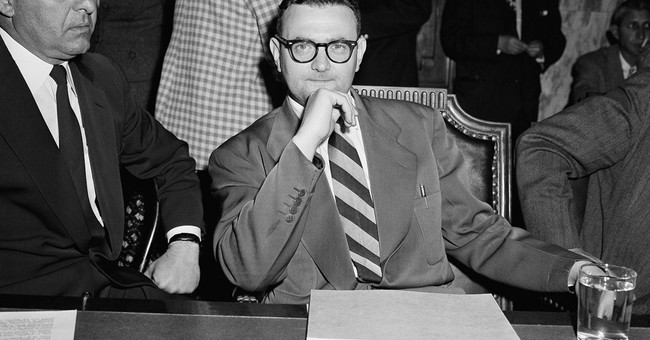 David Greenglass was a prominent member of the supporting cast in a real-life spy story that shook the country in the 1950s -- the Rosenberg case. Indeed, it was his testimony that sent his ill-fated sister Ethel, the wife of Julius Rosenberg, to the electric chair along with her husband in 1953.

David Greenglass' death at 92 should have been big news, at least on the obituary pages. For he was as much a part of American history as Benedict Arnold or Alger Hiss, yet it took months after he died in July for the news to make the papers. Even then the announcement didn't come from his family. The nursing home where he'd been living under an assumed name confirmed his death when a reporter for the New York Times got wind of it and called.

Say what you will about the Times' always politically and culturally correct news coverage, its obituaries remain the best in the country. However colored they may be by the Times' prejudices, its stories about the dead are always so ... lively.

If he died in obscurity, David Greenglass had good reason to seek it. A devoted Communist who became a devoted squealer, he would wind up separately but equally despised by both sides in the Cold War. For good reason.

Years later, he would recant his testimony when a reporter, again for the indefatigable Times, hunted him down and asked him why he would rat on his own sister. To save his wife, Ruth, he claimed, again blaming the nearest woman. He did it for her. Right. Not because turning state's evidence also assured more lenient treatment for himself. By that time no one on either side of the Rosenberg case could trust him.

It was his wife, David Greenglass told the reporter from the Times, who probably typed up those atomic secrets he stole from the Los Alamos National Laboratory, where he'd been sent as an Army sergeant with experience as a machinist in civilian life. That was during the Second World War, and he was one of the many working on the super-secret Manhattan Project -- the historic effort that beat the Germans to the world's first atomic bomb.

According to the latest and best judgment offered by historians who have chronicled the annals of nuclear espionage -- "The Rosenberg File: A Search for the Truth" by Ronald Radosh and Joyce Milton -- Ethel was certainly part of the spy ring, had played a key role in recruiting others to join it, and was guilty as charged. But her role was subsidiary to her husband's. She was an accessory to the crime, not the central figure Julius was.

That's not what the jury heard from the government's zealot of a prosecutor -- Irving H. Saypol -- who could have been Andrei Vishinsky leading the charge against all those old Bolsheviks put to death in one of Stalin's great purges. Ethel Rosenberg, the prosecutor declaimed in grand style, was fully deserving of the death penalty because she'd typed up her brother's notes. ("Just so had she, on countless other occasions, sat at that typewriter and struck the keys, blow by blow, against her own country in the interests of the Soviets.") Off with her head!

Ethel Rosenberg's having typed up those stolen secrets became the central accusation against her, and certainly the most emotionally resonant one. It was the linchpin of the government's argument for putting her to death. And the jury bought it.

Both of the Rosenbergs, duly convicted, would be executed at Sing Sing on June 19, 1953. Despite worldwide protests from Paris to Moscow organized by the Communist Party and its fellow travelers, who were always on the lookout for a good cause celebre, however inflated or short-lived, before moving on the next subject of their agitprop. The Rosenberg Case made fine fodder for America's enemies.

It wouldn't be the first time our Justice Department showed a fine disregard for justice. That pattern scarcely began with the present administration, which has only continued it, not inaugurated it. There is no shortage of precedents, legal and historical, for scandals like Fast and Furious or the IRS' selective tax exemptions. And high among those injustices was the execution of Ethel Rosenberg on the dubious testimony of her own brother. It is now highly doubtful that she was the one who transcribed those notes of her brother's, the most inflammatory accusation against her.

But the truth has a way of outing, however long it takes. More and more of it is revealed as the years pass. Every time a key figure in the case passes on, another opportunity to revise the historical record presents itself. No matter who that historic figure is, and whether the moral standard he set was high or low, or, in David Greenglass' case, the lowest.