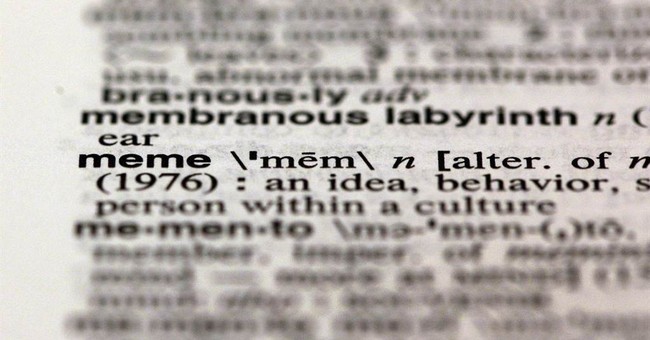 The scholar H.W. Fowler described and diagnosed many a linguistic malady in his classic study, "A Dictionary of Modern English Usage," back in that very modern year 1926. The Roaring Twenties were a study in modernity, and 1926 marked a high point in every field of fashion. Just catch a glimpse of the flivvers and flappers in "Downton Abbey."

Words and phrases come into vogue, too, and all too many of the less felicitous of them can't go out soon enough, much like leisure suits and muumuus.

Mr. Fowler's magisterial work on English usage was fated to become dated from the moment of its completion -- as any chronicle of a living language must. For language does not stand still any more than life does.

The complete schoolmaster, Mr. Fowler reserved an entry in his magnum opus, a kind of Gray's Anatomy of the English vocabulary, for what he classified as vogue-words, whose passage in and out of style deserves study like the course of any other disease:

"Vogue-words. Every now and then a word emerges from obscurity, or even from nothingness, or a merely potential and not actual existence, into sudden popularity. ... Ready acceptance of vogue-words seems to some people the sign of an alert mind; to others it stands for the herd instinct and lack of individuality; the title of this article is perhaps enough to show that the second view is here taken; on the whole, the better the writer, or at any rate the sounder his style, the less will he be found to indulge in the vogue-word."

Some of those vogue-words whose use so irritated Mr. Fowler have mercifully faded with time, like frock for dress, and beau geste for gesture. Even his own invention, vogue-word, has now become a buzzword -- a term that has become a buzzword itself.

Unfortunately, for every vogue-word that disappears from the vocabulary, others pop up like crabgrass. The press releases, partisan outpourings and oh-so-expert analyses of economic and political trends that fill my email bin every morning are full of currently fashionable vogue-words. See how many you can spot in this all-too-typical paragraph I've fabricated to display them like so many lab specimens:

"It's time to focus on the problems, or as that icon of social justice, Saul Alinsky, might put it, we need to take control of the narrative rather than let the Far Right dictate it. Only then will we break through the clutter and, at the end of the day, design an exit strategy, one that will improve our bottom line. We need to devise a holistic approach that will impact Generation X, and start thinking outside the box. Moving forward, we must emphasize diversity, affirmative action and proactive policies suitable for globalization so we can implement new paradigms."

Whew. It's not a pretty sight, all those vogue-words old and new and new about to become old, crammed into that one awful paragraph. Among my favorites:

Focus on. Now used as a verb, focus is an inferior substitute for concentrate.

Social justice instead of the real thing.

Take control of the narrative, which now seems to mean spin a story our way.

Far Right, a description for anyone farther to the right than ourselves.

Break through the clutter, which is a favorite in business class, along with bottom line and thinking outside the box. Indeed, the esoteric terms that fill the financial pages -- quantitative easing, long-short, securitization -- bring to mind the prospectus of one of those dubious hedge funds that go broke by the dozen, or just disappear.

(The use of a specialized jargon, whether around the copy desk or the operating table, serves not just to ease communication but to confine it to the cognoscenti, lest outsiders understand what's going on or even, heretical thought, develop opinions of their own. It's not silence that gives consent in our time but verbosity. For it cloaks what's really happening behind the scenes. And if we can't understand what's being done with our bodies or our money, how can we object to it?)

At the end of the day no longer means sunset but has taken the place of older standbys like To Sum Up or In Conclusion to indicate a merciful end to some boring presentation.

Exit Strategy, a phrase meaning only a way out, aspires to sound like something more significant, more elevated, Kissingeresque, geopolitical.

Generation X, the cohort born between the early 1960s and early 1980s, or just after the Baby Boomers.

Diversity and Affirmative Action may now be the most common euphemisms for racial/sexual/ethnic quotas.

Moving Forward, also known as Moving Ahead, is nothing more than a verbal tic, a punctuation mark used to divide sentences or paragraphs, or just something to fill air time, like a speaker's clearing his throat.

A proactive policy is the latest synonym for any policy being passed off as new and forward-looking.

And globalization would seem to mean what internationalism used to. The way paradigm is the latest word for what used to be called a model.

It can be dizzying, trying to weave your way through all that modspeak. Please forgive me for inflicting so much of it on you in one compact, decaying heap. Like a compost pile. But if you think all that was hard to read, think of how it was to write -- if any such compilation of fast-rotting verbiage could be called writing.

Oh, where is a new Fowler when the language so much needs one?

With NY State Police Deployed to Deal with Rochester Riot, New Video Appears to Show Looters Beating Married Couple
Matt Vespa
The One Thing Riots Across the U.S. Have In Common – and It's Not Black Lives Matter
Beth Baumann
Buffalo Mayor to Rioter Who Destroyed City Hall: 'We Have You on Camera, You Idiot'
Cortney O'Brien