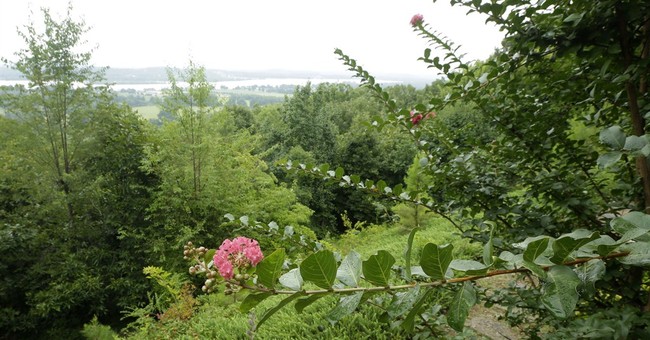 Ebola isn't the only plague in this troubled world. Another one is called hysteria, and it's just shown up in little Harrison, Arkansas -- which is in the most picturesque part of the state, up in the Ozarks. It's got mountains, it's got streams, it's got forests -- and the nicest, most welcoming people. Ordinarily. But now the town has come down with a bad case of the jitters. And it sounds just about beside itself. ("Harrison tells Ghana group: Don't come/ City cites Ebola fears..."--Arkansas Democrat-Gazette, August 24, 2014.)

So a group of visitors from a major country in West Africa invited to Arkansas through Sister Cities International has been told to stay away, at least for now. Until the fever abates. No, not Ebola but the fever known as ravening fear, which, as always, is fueled by rumor and agitation. And to think, they call Africa the dark continent.

Never mind that our visitors may already have had their flu shots and paid for their air tickets, and could be waiting to leave with visas in hand to see America for themselves -- enlightened, hospitable, scientifically advanced America. Naturally these guests would be fully screened, like any others entering the country legally and properly.

As it happens, Ebola can only be contracted from the blood or body fluids of people already showing signs of infection. Or from too close contact with the dead. But it turns out that Africa isn't the only place where superstition can overrule science

Perhaps the saddest thing about this outbreak of sheer fear in a nice little town is that it seems to have panicked the very people and institutions that should be a source of calm and reassurance when a community comes down with the heebie-jeebies. Reputable institutions like the local hospital, college and public school district, all of which have backed out of plans to welcome these visitors.

Their actions spoke louder than the sensible words of Harrison's mayor, who diagnosed the real disease threatening Harrison: "It's hysteria in my book. It's hysteria that's built up, and it's not based on fact." The mayor sounds very much alone, like anyone who keeps his head while others all about him are losing theirs.

Or as an American president facing a different kind of hysteria in a different time as a different kind of panic swept the country described this fast-spreading malady -- "nameless, unreasoning, unjustified terror..."--Franklin D. Roosevelt, First Inaugural Address, March 4, 1933. Like the mayor of Harrison, Arkansas, today, FDR was trying to provide leadership instead of adding to the panic.

At such a time, look for the usual troublemakers to come crawling out of the woodwork -- like Billy Roper of Stormfront.org, who was last heard from raging against "anti-white activists" in Harrison. Now he wants to know why Harrison couldn't have chosen some nice lily-white Sister City in Europe instead of some place in Africa. (Maybe a town in Ukraine or Russia, those vales of peace in a troubled world?)

There is apparently no scare that this Billy Roper can't try to exacerbate. And this time he seems to have respectable company, which is the real shame and threat in little Harrison, for when the nice, educated people in a town play along with the hysteria that agitators exploit, then the town's got real problems. (See Ferguson, Missouri or any other community when it loses all sense of proportion.) Ignorance, as it turns out, is not bliss but a recurrent danger that only knowledge and leadership can cure.

Ebola is but one danger in a dangerous world. So are ignorance, panic and those who would play along with those destructive forces that tear a place apart. Anybody who enjoys scaring himself would do better to pick up one of the many sci-fi books featuring a wild, world-threatening (and wholly fictive) pandemic. There's certainly enough pulp fiction around. Why add to it?