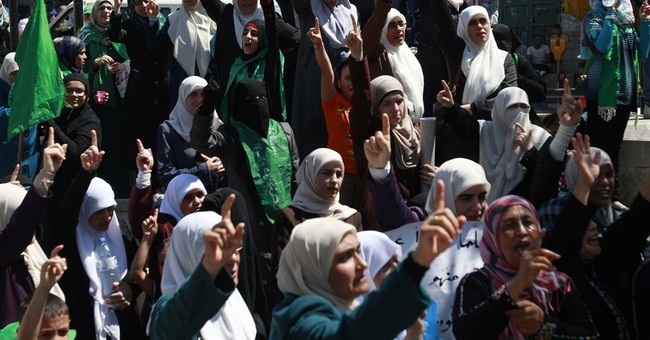 It made no sense, not from any rational perspective. Even as Gaza was falling in all around it, Hamas kept firing rocket after rocket in the general direction of Israel, no matter how many might hit or miss or go completely astray, as when they fell inside Gaza itself -- as many did.

That rain of rockets, after the kidnapping and killing of three Israeli teenagers, is what led to this renewal of hostilities in the first place. Like the Arab-Israeli conflict in general, this latest round of violence seems endless. This is the third time the Israelis have had to enter Gaza just within the past decade, and now the latest 72-hour truce didn't last even 24 before Hamas broke it.


Even our incurably naive secretary of state may be catching on at last. He's issued a statement blistering Hamas for its latest outrage -- though not its Turkish and Qatari sponsors. John Kerry's eyes may be fluttering, but he's far from fully awake even now, still unable to clearly distinguish the bad guys from the good in this latest crisis. At least, not publicly.

Even if a temporary truce is cobbled together again, it's not likely to prove much more than temporary. Cease-fires are so much easier to break than to negotiate, and Hamas seems to live in a bloody world of its own. The more Hamas and poor Gaza were hammered, the more insistent Hamas' claims of victory grew in the midst of its defeat. As if it had to convince itself that it was winning. Surely no one else would be fool enough to believe as much on the strength of all available evidence, mainly a Gaza in ruins and a Hamas that can't get its story straight.

Hamas rejected one offer of a cease-fire after another in this bloody imbroglio. How many did the Israelis sign on to before this latest one was accepted -- four, five, counting temporary truces for humanitarian reasons? And when Hamas finally did accept a temporary, 72-hour truce, it promptly violated it. Welcome to the Middle East, Mr. Secretary.

At one point Hamas did announce some war aims -- demands that would have to be met if it was going to end this latest round of an endless war. But those demands sounded more like rationales for its war against Israel than reasons, more like ways to continue the war rather than end it.

For example, Hamas demanded an end to the Israeli blockade of its coast and of the checkpoints Israel and Egypt have set up on Gaza's borders. That way, Hamas could import still more rockets without hindrance, not to mention other weapons.

Never mind that truckloads of essential supplies, like food and medicine, entered the Gaza Strip daily from Israel during its "occupation," which Israel formally ended when it left Gaza in 2005 -- and now it's reaping the bloody consequences. It's more engaged than ever after what was supposed to be its "disengagement."

Lest we forget, there have been truces before in this conflict between Gaza and Israel, and after one all too short-lived one, the Israelis did agree to ease their restrictions on what goods might enter Gaza -- like cement. Hamas argued that such supplies were needed to rebuild Gaza's economy and let its people have a normal life. And so, after considerable coaxing, Israel agreed.

Only now, after Israeli troops began to discover and destroy Hamas' vast network of tunnels into Israel, does it become clear where all those tons of cement went -- into an underground metropolis of tunnels complete with overhead lighting, telephone lines, rail lines and holding cells for hostages its fighters might take in the course of their raids on towns and villages. Cells equipped with manacles and shackles to make sure the hostages don't escape. Nice people, Hamas. (One such tunnel had an exit conveniently close to an Israeli kindergarten.)

Think of all the schools and hospitals, highways and houses all that cement could have been used to build in Gaza instead of this elaborate, multimillion-dollar network with no purpose other than to infiltrate Israel.

Now all that has been exposed, and above-ground Gaza is being systematically reduced to a smoking ruin. Why? What is Hamas' strategy? The answer to that question is simple enough. Strategy? There is none. Fanaticism doesn't need a strategy. It needs no reason to indulge in violence, however destructive or self-destructive. Violence is its own reason for being. There is no method to Hamas' madness. It doesn't need a reason to strike any more than any other plague does.

Hamas' diplomatic strategy, if it has one, makes as much sense as its military one. It's spent the past few years alienating one ally after another, uniformly aligning itself with every cause in Arabdom that was about to fail.

Hamas' headquarters used to be in Damascus, remember, and its host the equally ruthless Bashar al-Assad, scion of a long line of pitiless tyrants. Yet it bet on his fall, and lost. And now it's paid the price -- and been expelled.

Having been booted out of Syria, and in the process offended Syria's great patron, the theocracy in Iran, Hamas next turned to playing its cards every way but right in Egypt, where it went from being a branch of the Muslim Brotherhood to fall from power when the Brotherhood did. After the military coup there, Hamas became non grata in Cairo, too, where its allies were locked up by the scores.

By now Hamas is running out of Arab powers to offend, having long ago alienated Saudi Arabia and associated little oildoms like the United Arab Emirates and Kuwait.

At last check, Hamas was down to Qatar as a sponsor, and maybe Turkey, which is re-entering its Islamist phase -- a development that Kemal Ataturk, father of modern Turkey, would have deplored. Ataturk may have thought he'd killed the old, Ottoman Turkey, but now it revives under a demagogue and dictator who may yet undo all his reforms and return Turkey to the dark ages. Which is where Hamas still resides.