One round trip to Gaza, Please 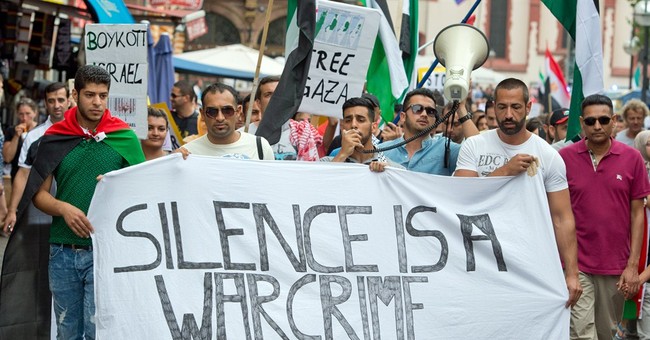 Despite their reluctance, the Israelis are back in Gaza -- for the third time in a decade, and for who knows how many times to come. It's become almost a regularly scheduled round trip by now. Their reluctance is understandable; Gaza has been a trap since the old days. Specifically, the Old Testament days. ("The Philistines are upon thee, Samson!" --Judges 16:20.)

All of which may explain why the Israelis didn't invade this time until Hamas rejected their (and the Egyptians') repeated offers of a truce. Now they're back to block the tunnels Hamas was using, or rather planning to use, to burrow under Israeli lines and augment its indiscriminate rocket attacks all over Israel with new guerrilla raids. The ground war Israel had been trying to avoid was no longer avoidable.

Welcome to the real world. It's not exactly the neat picture all the critics love to draw. It gets murky after a while. For it tends to wind up covered with blood.

No longer eyeless in Gaza, the Israelis may finally have learned that they must not only strike back but keep striking back if they are ever to have any hope of peace and quiet at home.

The fabled two-state solution, largely an invention of the Israelis themselves, is continuing to prove, yes, a fable. And a fable it has always been. As is shown by the history of Gaza, and maybe of the whole Arab-Israeli conflict.

Lest we forget -- the way so many diplomats, mediators and kibitzers in general do -- the Israelis cleared out of Gaza lock, stock and not just barrel but to the last farm, hothouse, dining hall, synagogue and Jew back in 2005. The withdrawal was carried out over the settlers' vigorous protests, as if they could foresee the disaster their oh-so-enlightened government was inviting. They did foresee it; the world didn't.

The dream was indeed beautiful, if only you didn't have to wake from it. The theory behind it was lovely: If only Gaza could be turned over to the Palestinians and not a single Israeli allowed to remain there, it would prove a model of two states living side by side in peace and security. A mini-Canada and the United States. You could almost hear the harps playing in the background as the vision was unveiled. ("Peace in the Middle East" -- a DreamWorks Production.)

There'll always be a full house of gullibles for such productions in Israel and out, and a producer like John Kerry to turn out the latest sequel till he throws up his hands, gives up and leaves the whole folly to the next promoter.

Sometimes the promoters come back again and again. Not having learned his lesson at Camp David, where he staged his fiasco of a peace negotiation, Bill Clinton was back over the weekend second-guessing the Israelis' latest invasion of Gaza and promoting the same old Peace Process that has a way of becoming a war process. Some of us can understand. We've dreamed from time to time, too.

But then reality dawns, as reality will. And now once again Gaza has proven a model for a one-state, one-terror-base non-solution. Also a model of Israeli gullibility. Even today all those rockets out of Gaza are said to be protests against the Israeli "occupation" -- when not a single Israeli has occupied Gaza in years. How long are we supposed to fall for that line? But some always will.

The Israelis, who are supposed to be so quick on the uptake, have proven time and again to be slow learners. They've been willing to accept still another Arab state in the Mideast time and again -- how many would this new Palestine make, 22, 23? -- at least since the Peel Commission's report in 1937. And at regular intervals ever since: the partition of British Palestine in 1947, after the Six-Day War in 1967, even until now. And the Arab response hasn't changed essentially since the infamous Three No's of the Khartoum Conference after the Six-Day War: no peace, no recognition, no negotiations. And no real change.

The moral of this sad old story: It's never been the creation of another Arab state that has been the major sticking point between Israelis and Arabs but the destruction of the Jewish one. Just read over Hamas' charter, which still contains a demand that Israel be destroyed -- "Israel will exist and will continue to exist until Islam will obliterate it...." That pretty much captures the malignant spirit of the whole 36-article declaration of endless war.

And yet the Israelis have been slow to adopt even the most obvious and necessary steps to keep the aggressors at bay:

They debated for years before building a wall -- excuse us, a "defensive barrier," to use the going euphemism -- to keep suicide bombers from attacking every bus route, café, supermarket and hotel they chose to at the time.

They were skeptical about erecting a sophisticated missile defense that would protect their towns and cities ("Iron Dome"), and which now has proven so effective that the Israelis have had the luxury of putting off this year's invasion of Gaza till Hamas left them no other choice. The Israelis arrived last Thursday, hoping to seal those tunnels into Israel and come back in short order.

But in this war as in all others, nothing is sure. And whatever the Arab-Israeli conflict is, one thing it isn't is short or sure. Intractable would be a better adjective for the nature of that struggle. Even if the Israelis are able to accomplish their currently limited mission in Gaza and return home in a few days or weeks, it won't be Goodbye but only See You Later.

Like many another nation, Israel is learning that freedom isn't free or security attainable without sacrifice. Not just eternal vigilance but a willingness to act is the price of liberty.