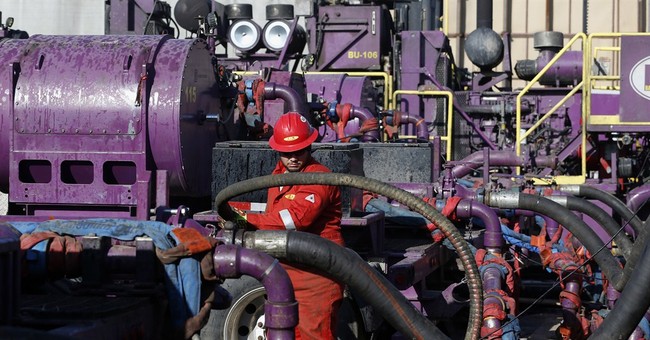 Remarkable. But typical. This administration has just released a 42-page advertisement for itself that it calls a report. In it, Barack Obama & Co. take more than full credit for the dramatic change in this country's energy prospects -- from the long years when they were increasingly dismal to how radiantly bright they have become today.

This "report" out of the White House, which might more accurately be described as a campaign document, notes the increase in domestic production of natural gas and the decrease in oil consumption in tandem with it. The report may give a lick-and-a-promise to the role of "technological innovation" in this turnaround, but it tends to avoid the one word that explains it all: shale.

Just from reading the report, you might never suspect all of North America was in the middle of a Shale Revolution.

Also downplayed, if not completely ignored in these 42 largely irrelevant pages, is the process that, after all these many years, has made shale a usable, even copious, source of energy: fracking. That's a dirty word in eco-radical quarters, and the White House isn't about to offend its political base. So once again ideology must take precedence over lesser considerations -- like the simple truth.

As usual The Forgotten Man in all such discussions is George P. Mitchell, the Texas wildcatter who spent a lifetime promoting and perfecting and developing and refining his notion that far below the surface of the wide-open plains lay a source of untold energy -- if only it could be tapped. And he proposed a way to bring it to the surface: horizontal hydraulic fracturing, now known just as fracking.

It took George Mitchell decades to make his one driving idea reality, and to do it he had to overcome many a hurdle, including the usual blindness of conventional wisdom. He may have gone broke more than once, but he never gave up. Giving up was not in his character. He was the very personification not only of innovation but tenacity.

It was only to be expected that an official report out of Washington should overlook George Mitchell and his idea even as it is paying off -- perhaps even beyond his soaring dreams. For a few days of fracking might be enough to produce decades of fuel from a single successful well.

In order to fully appreciate this moment, let's go back in time. Remember the Energy Crisis? How about oil embargoes? The image those now dated phrases always bring to my mind is that of an ill-starred president named Jimmy Carter wearing a sweater in the Oval Office -- and he is delivering a stark message to the nation: Colder, darker days lay ahead. And the best we could do was to shiver, lower our thermostats and button up.

Jimmy Carter was the very image of America's malaise in the pre-Reagan 1970s. He was a picture not only of American defeat but, much worse, the acceptance of it. Those days may seem like only a bad dream now, for his wasn't the right approach even then -- the embrace of scarcity as something akin to secular sainthood.

How about Peak Oil? Remember it? That was the theory that the whole world was running out of petroleum. Fossil fuels were going the way of the dinosaurs that left them, and it was time to return to the simpler days before the internal combustion engine. For years the concept of Peak Oil was all the rage among intellectuals and fuzzy thinkers who wanted to be.

There was just one factor this legion of doomsayers didn't take into consideration: the ingenuity and innovation, not to say sheer stubborn cussedness of American entrepreneurs like George Mitchell, who have always come along to revolutionize the American economy when it most needed revolutionizing. Whether the revolutionary of the moment was Andrew Carnegie in steel, John D. Rockefeller in oil, or Thomas Alva Edison in everything.

Just name your favorite inventor-tycoon (Steve Jobs? Bill Gates?) and ask if government could do as well at innovation. Maybe it could, and has, but only in extremis, and then only by harnessing the vision of individual geniuses -- like Enrico Fermi and J. Robert Oppenheimer for the Manhattan Project.

Or aren't we allowed to recognize the world-changing contributions of single, unique individuals any more in this politically correct day? Or must they all be as ignored as George Phydias Mitchell in his? Their manifest contributions to American power, sometimes literally, and to the world's prosperity in general may now be dismissed with only a snappy comeback. ("You didn't build that!")

Meanwhile the silent revolution goes on. And the world is taking notice. South Africa's state oil company, Sasol, is building a sprawling 3,034-acre complex near Lake Charles, La. (estimated cost: up to $21 billion) to handle the deluge of fracked natural gas soon to arrive, which will need to be turned into fuel, plastics, paint, packaging....

Call it Qatar on the Gulf -- not the Persian Gulf this time but the Gulf of Mexico. And it could amount to the single largest construction project on these shores ever financed by foreign capital. But it's scarcely exceptional. Terminals to export liquefied natural gas (LNG) are going up all around the North American continent.

The mammoth natural-gas deal that Russia and still Communist China announced to much fanfare not long ago is one between two regimes that have every reason to be wary of one another, and that may turn on each other soon enough, as they have before.

But this country can offer a stable, continuing and abundant supply of natural gas to our allies in both Europe and Asia. The drilling process that George Mitchell bequeathed to all of us is changing not just the nation's and the world's economy but its geopolitical realities. The days when oil powers like Russia can bully their neighbors (like Ukraine) may be numbered.

Despite the naysayers, America is rising again. On the strength of what has always made America great -- our ideas. And the kind of Americans willing to stake their all on them.

Of course, there will be dark days ahead as well as bright ones, but never sell America short. Yes, there may be lulls between our advances, and bouts of defeatism when our leaders lose hope and vision, but don't fool yourself -- or others. This country isn't in decline. It's still rising.