An Appointment in Samarra 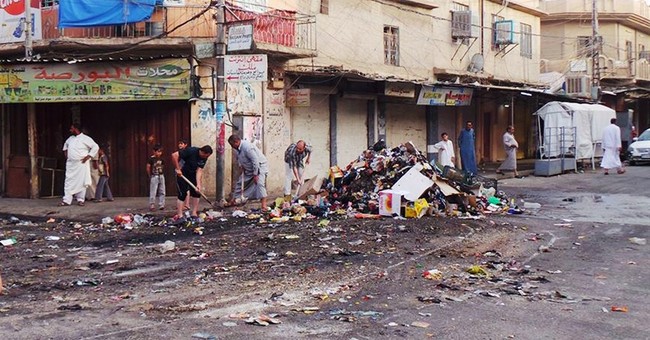 Another day, another country left to the tender mercies of terrorists. Going by his own arbitrary, purely political deadline, this president and now only nominal Leader of the Free World has been intent on pulling American troops out of one country after another in the (always) troubled Middle East, with the result that one country after another is swallowed up by the all too familiar forces of chaos, terror, death and destruction.

This week's bad news is that oil-rich Mosul in Iraq has fallen to a terrorist outfit that makes al-Qaida look moderate. So add Mosul to the cities now captive to the forces of terror. And the road to Baghdad lies wide open before them. Next they have an appointment in Samarra and have already been spotted on its outskirts. For there is no longer an American presence in Iraq to stop them, or even serve as a tripwire as in Europe or Korea.

One hard-won gain after another in Iraq has been abandoned to the enemy. Think of Fallujah, where so much American blood was spilled. It's gone, too.

"The situation is certainly very grave on the ground," one spokesflack for the State Department acknowledged this week, which may be the understatement of the year.

Another official mouthpiece at State, the well-named Josh Earnest, said this country was watching developments in Iraq "very carefully." There. That ought to take care of the problem. This Mr. Earnest must be joshing, for he sounds like the last of the straight-faced kidders. Only what's happening in Iraq, and throughout the Middle East on this administration's watch, is anything but a joke.

Half a million Iraqis are now said to be fleeing for their lives, and their children's. The flow of refugees to the one stable part of Iraq -- Kurdistan -- is already beginning to overwhelm even the resourceful Kurds.

And who knows when the next Henry Kissinger will come along to betray the Kurds once again? For our State Department is back living in its own make-believe world -- an alternate reality where no American troops are needed, Iran's mullahs are serious about giving up their race to develop a nuclear weapon, and Syria is doing just fine under this president's policy of malign neglect. All as another once stable front in the war on terror collapses.

Nor has Washington voiced any objections to letting Hamas, another lovely bunch, into the new, now formally unified American-approved and American-financed Palestinian government or imitation of one. ("Ain't nobody here but us technocrats.") Right on schedule, the first rockets under this not-so-new Palestinian order have already been fired at Israeli targets. Quick on the trigger, these "technocrats."

Has there ever been a people so ill-served by its leaders as the Palestinians? Having been led to spurn one reasonable compromise after another over the years and decades, going back at least to the Peel Commission of 1937 and its recommendation that Palestine be partitioned into Arab and Jewish states, the Arabs of what was once Palestine have been left with almost nothing by now. And, despite all their pretenses of unity these days, a bitterly divided nothing at that. This time they seem to have become a failed state even before they've achieved statehood.

If you seek Barack Obama's monument, just look around at the Middle East, which is fast becoming one big repeat of Iraq in 2006, when not a day passed without another disaster. All that changed when a commander- in-chief who really was a commander-in-chief (George W. Bush) finally wised up, canned his incompetent secretary of defense (the snappy-talking Don Rumsfeld), and found a general (David Petraeus) who actually knew something about the art and science -- and conduct -- of counter-insurgency warfare.

That general's Surge turned everything around. By the time Bush II had left the Oval Office, the war in Iraq had essentially been won. Estimated civilian casualties were dramatically down from more than 30,000 in 2006 to less than 5,000 in 2009. American casualties were few if any. But all that progress has been reversed during this failing presidency, and Iraq is fast returning to its worst days.

"It is dangerous to be America's enemy," goes an old refrain among Middle East watchers, "but it is fatal to be her friend."

It's hard to see how this president will blame Iraq's collapse, too, on George W. Bush, but something doubtless he'll try. And next comes Afghanistan, which this administration is also moving to abandon by an arbitrary deadline.

Washington turned its back on Syria years ago, and its disintegration continues to send waves of suffering, instability and terrorism throughout the Middle East. How long before Americans must return to that nest of sorrows and clean up the shambles this administration is making of any coherent American foreign policy there?

If this be peace in our time, what would be disaster? If this is escaping death and destruction, what would rushing toward it be?

Let us end this tour d'horizon of disaster with a word from the one party sure to wax strong on it:

"Death Speaks: There was a merchant in Baghdad who sent his servant to market to buy provisions and in a little while the servant came back, white and trembling, and said, Master, just now when I was in the marketplace I was jostled by a woman in the crowd and when I turned I saw it was Death that jostled me. She looked at me and made a threatening gesture; now, lend me your horse, and I will ride away from this city and avoid my fate. I will go to Samarra and there Death will not find me.

"The merchant lent him his horse, and the servant mounted it, and he dug his spurs in its flanks and as fast as the horse could gallop he went. Then the merchant went down to the marketplace and he saw me standing in the crowd and he came to me and said, Why did you make a threatening gesture to my servant when you saw him this morning? That was not a threatening gesture, I said, it was only a start of surprise. I was astonished to see him in Baghdad, for I had an appointment with him tonight in Samarra."