Back by Popular Demand: Tyranny 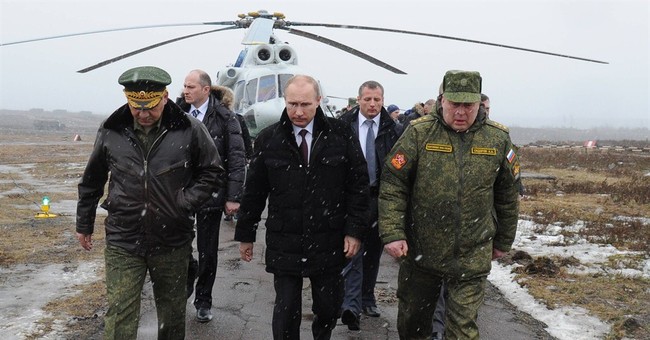 Ham and eggs, dictators and plebiscites, tyranny and sham elections, they all go together. So it was wholly to be expected, which means it was wholly a surprise to our ever-alert administration, when the latest tsar decided Crimea was ripe for the picking and sent in the Cossacks (sans identifying insignia for now). As usual in these matters, the local bullyboys, formally known in press reports as militias, backed up the not very well disguised Russian troops. With that little formality out of the way, Vlad the Annexer ordered a plebiscite (and its usual result) for immediate delivery, specifically Sunday, March 16, 2014. Satisfaction Guaranteed.

It was all according to Hoyle, or rather Hitler, whose well-thumbed playbook specified that each conquest, from the remilitarization of the Rhineland in the West to the Anschluss with Austria in the East, be approved by a rigged referendum. Then came the takeover of Czechoslovakia piece by piece -- first the Sudetenland and then the rest on the installment plan. It was all easy enough, and predictable enough, after the Western democracies had collapsed at Munich. That grab, too, would be ratified at the ballot box as the pattern continued: first conquest, then plebiscite.

The outer signs of democracy must be preserved while its substance is hollowed out. To quote T.S. Eliot, the poet laureate of Western decadence Between the Wars: Shape without form, shade without colour/ Paralysed force, gesture without motion . . . . The lines are from "The Hollow Men," a title that might be the perfect description of Western leadership then as now, from Neville Chamberlain to Barack Obama.

Once again a popular vote, this time in newly captive Crimea, is staged -- but Tsar Vladimir took no chances with the wording of the ballot. The voters would have only two choices: annexation to the Soviet Union -- excuse me, Russia -- now or later, immediately or as soon as Crimea's puppet parliament approves. And it will once Moscow pulls its strings. There is no way for Crimeans to vote for remaining in supposedly independent Ukraine. And this will be called a free expression of the people's will.

"Any discussion about the future of Ukraine must include the legitimate government of Ukraine," says President Obama. "In 2014, we are well beyond the days when borders can be redrawn over the heads of democratic leaders." Really? If so, our president must have forgotten to tell the Russians, whose latest tsar keeps adding to his subjects, from Georgia to Crimea.

"The steps taken by the legitimate leadership of Crimea," says V. Putin, who sounds a lot like an old Commissar of Nationalities named J. Stalin, "are based on the norms of international law and aim to ensure the legal interests of the population of the peninsula," which is now perfectly free -- to do just what Moscow says.

Once the annexation of Crimea to the Motherland is an accomplished fact, and it's being accomplished every day -- by force -- does anybody think this administration or an equally supine Europe will do anything about it? Anything beyond a few more paper protests, that is.

Then it will be time for the next Russian advance. A slice of Ukraine, maybe? Why not? For the world's (non)reaction will be pretty much that of the last American secretary of state after the massacre at Benghazi: "What difference, at this point, does it make?" --Hillary Clinton, January 23, 2013.

So long as the West has no will to resist aggression, aggression will not be resisted. And it's clear that the current crop of Western "leaders" is a little short of will these days. Indeed, a lot short. They all seem decided only to be undecided, resolved only to be irresolute. Oswald Spengler could be writing his "The Decline of the West" right now; it never seems to go out of date.

But now and then an exceptional leader, after a long series of provocations, will finally arise with the courage to face facts and tell the old truths once again. Like this voice in the wilderness after the sellout at Munich in 1938. A wave of rejoicing and relief had engulfed England when Neville Chamberlain returned to London waving his scrap of paper and proclaiming Peace In Our Time, but there's always one spoilsport. This time it was a washed-up old Tory backbencher named Winston Churchill who dared point out the obvious:

"I do not grudge our loyal, brave people, who were ready to do their duty no matter what the cost, who never flinched under the strain of last week -- I do not grudge them the natural, spontaneous outburst of joy and relief when they learned that the hard ordeal would no longer be required of them at the moment; but they should know the truth...."

"We are in the presence of a disaster of the first magnitude. Do not let us blind ourselves to that. ... And do not suppose that this is the end. This is only the beginning of the reckoning. This is only the first sip, the first foretaste of a bitter cup which will be proffered to us year by year unless by a supreme recovery of moral health and martial vigor, we arise again and take our stand for freedom as in the olden time."

Now as in 1938, another little province falls sway to a dictator's will and the old Iron Curtain descends again. Remember it? Who says the Cold War is a thing of the past? Except pollyannas like our president and secretary of state. There is still time to face facts and tell the truth -- and act upon that truth. But not as much time as there was last week or will be next week. For this commander-in-chief went wobbly some time ago. And not until the West's moral disarmament is reversed will its old spirit return. And its old energy.

But what can be done? The position of Leader of the Free World has been vacant for some time now, and to fill it again will take a reawakened West, and a reawakened president and commander-in-chief. He can start by sending those NATO troops to Poland its shaken president has just requested. In the first days of his Reset with Russia, the current occupant of the White House unilaterally reversed his predecessor's plans to install an air defense system in Poland and the Czech Republic--without bothering to consult the Poles and Czechs. Now that reversal needs to be reversed, and the Reset reset. Just for starters.

Messages need to be sent, and not just in empty speeches and meaningless communiqués but by concrete actions: trade restricted, visas withheld, aircraft carriers dispatched. ... Or the West will continue to wallow in its own weakness, inviting more developments like the endless horror in Syria, the mullahs' Bomb in Iran, the renewed chaos in Iraq and Afghanistan, and so disastrously on.

The bad news is piling up, as it was in 1938, for we have taken a wrong turn and find ourselves on an increasingly dangerous road. The good news is that we can yet turn back.

It took Russia's invasion of Afghanistan late in the Carter Years for that president to finally awaken to some old, old truths, among them that there is Evil in the world. Which seemed to come as a shock to Jimmy Carter, as if Man's fallen estate were news. Here's hoping the invasion of Crimea -- for let us call it what it is -- will have the same electrifying effect on this president and the West in general. Because that unending sound you hear, which grows louder and louder till it cannot be ignored, is a resounding wake-up call.