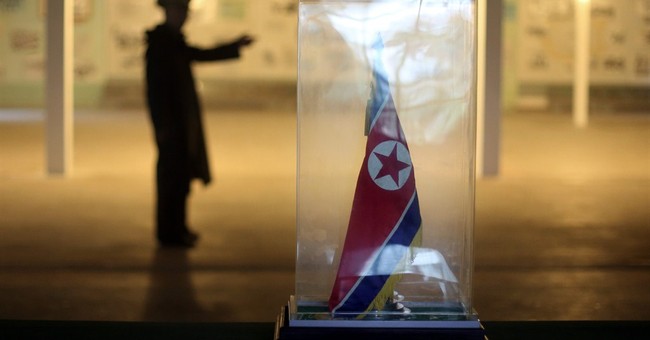 The Forgotten War, it's called. Which is why it was so good to have it remembered so ceremoniously and extensively this past weekend on the 60th anniversary of the tenuous armistice -- certainly not peace -- that has uneasily endured on the Korean peninsula ever since.

The Korean War is worth remembering and so are all those who fought in it, the living and the dead, the great and small, the worthless politicians who knew only how to continue it and the unsung heroes who died in the snow and ice.

And let there be no mistake: It was a war, not a Police Action, just as Iraq and Afghanistan in our time have been wars, not Overseas Contingency Operations. As always, euphemism is the first and clearest symptom of a lack of national resolve. Seldom since Korea, at least till now, has the disparity between this country's political leadership -- first unprepared and then vacillating -- and the heroism and endurance of its fighting men been so clear.

The war that seesawed across the Korean peninsula in the early 1950s should have left a permanent impress on the American memory, yet it was somehow distant even while it was going on, and the country grew to yearn only for it to stop. Any lessons to be drawn from that conflict could wait. Indefinitely. In important ways, they still do. To this day, the heroism of those who fought there, like the suffering of the Korean people, has never been accorded the attention both deserve.

In a masterpiece of strategic thinking still studied, MacArthur's landing at Inchon in September of 1950 represented a dramatic end run around the entire North Korean army, which was sent, shocked and shattered, fleeing back north, pursued all along its collapsing lines, ripe for unconditional surrender.

As daring and masterful -- as historic -- a stroke as Inchon was, MacArthur's letting himself be surprised by the massive Chinese entry into the war only a couple of months later would prove an historic debacle.

A veteran Marine general, Lewis Burwell Puller, found his 1st Marine Division posted to a remote part of North Korea, the Chosin Reservoir, early in November of that year -- just as the first great wave of fresh, well-equipped and well-prepared Chinese troops began to sweep into Korea from the north, the northwest, the west. ... The 1st Marines were just establishing their perimeter defense when the horde engulfed them on all sides.

Correspondents accompanying the American troops asked the general what his plan was now. Chesty Puller explained: "We've been looking for the enemy for several days now. We've finally found them. We're surrounded. That simplifies our problem of finding these people and killing them." The Marines did.

It wasn't just the press that was concerned about how Gen. Puller proposed to get out of that trap. A worried major made the mistake of asking the general what his line of retreat would be. Chesty Puller picked up a field telephone and told the commander of his artillery, all of it, to zero in on the Marines' own position and open up on any unit retreating without authorization. Then he turned to the major. "That answer your question? There will be no withdrawal." There wasn't.

Against all odds, the Marines held through November, then into December, until on December 6, 1950, the 1st Marines were ordered to break out and head for the port of Hungnam on Korea's east coast for evacuation. When someone referred to the retreat, Chesty Puller set him straight: "Retreat, hell! We're just advancing in a different direction."

By then the temperature had dropped to 25 degrees. That's 25 degrees below zero. Fighting every mile through a frozen Hell on roads that had to be carved out of the ice and snow, the marines advanced in a different direction. Make-do bridges had to be constructed in the harshest of Korean winters as a Siberian cold front moved south across the peninsula, but the 1st Marines drove on. They would take with them their wounded, their dead, and every jeep, half-track, tank, howitzer, gun and every other piece of equipment that could be salvaged. And they drove on.

By the time they reached Hungnam some 80 twisting miles away under constant attack, staving off every enemy ambush on the way, and prepared to embark, the Chosin Frozen had broken through seven Chinese divisions, leaving nothing behind. They had saved everything, honor above all.

As he was moving his men aboard ship, Chesty Puller was approached by another pack of reporters. All he had to say was: "Remember, whatever you write, this was no retreat. All that happened was we found more Chinese behind us than in front of us. So we about-faced and attacked."

The 1st Marines had marched across a frozen wasteland into American military history -- and Marine lore and legend. And so had Chesty Puller. At day's end on many a Marine base, the last announcement before Lights Out used to be: "Good night, Chesty Puller, wherever you are." Let's hope that's still the custom. General, you are not forgotten. And neither is your war and all the Americans who fought in it. Sic semper.