Of Public Servants Who Serve Themselves First 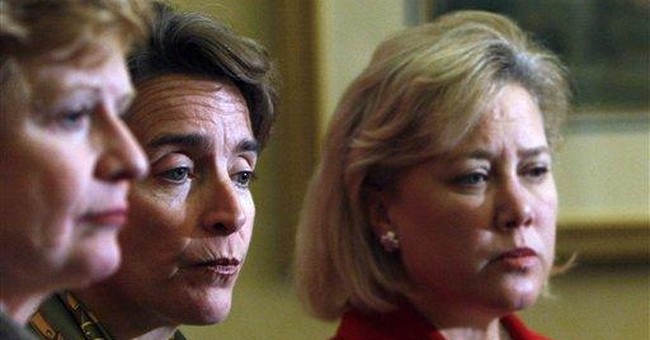 Whenever some politician portrays himself as the source of all blessings (thanks to your tax money, sucker), a scene from the movie "Lawrence of Arabia" comes to mind. It's the one in which Anthony Quinn, in the role of as some minor sheikh, is extolling his own generosity from atop a desolate sand dune: "I am a river to my people!"

It's a familiar enough spiel. Doesn't every Latin American caudillo regularly remind his subjects of how grateful they should be to him? And here in Arkansas, our senior senator, Blanche Lincoln, refers to her chairmanship of the Senate Agriculture Committee as a "pipeline" of benefits for her lucky constituents.

Senator Lincoln isn't so crass as to actually spell it out, but her message is unmistakable: We here in Arkansas ought to re-elect Lady Bountiful if for no other reason than sheer gratitude for all the benefits she showers on us. Isn't that the premise of every pork-dispensing politician when campaign season rolls around?

Not that a public servant like Senator Blanche would fail to serve herself first. For example, she takes full advantage of the franking privilege that lets her deluge our mailboxes this time of year with ads for herself.

It all comes under the guise of letting us simple folk know what's happening in the nation's capital. For example: "Lincoln's Historic Child Nutrition Legislation Passes Senate," "Lincoln's Tough Wall Street Reforms Become Law," "Lincoln is the Greatest There Ever Was...." OK, I made that last one up, but it pretty much captures the tone of the whole, self-promoting, self-absorbed genre.

By strange coincidence, the flood of franked mail arrives just in time for campaign season. How convenient. For her. She's not the one who has to toss it in the already overflowing recycling bin. Even more convenient, she's not the one who pays the hefty postage on all this junk mail with the pretentious headlines.

One of the senator's staffers, Marni Goldberg, says the senator sent out about 30,000 mailings over the summer. Think of how much that might have cost a private, taxpaying business. When the senator portrays herself as serving others, she feels no need to emphasize how well she serves herself.

The chairmanship of a powerful Senate committee is a pipeline of goodies, all right, especially for those who control its flow. Any lobbyist worthy of the name knows it's good to have friends in high places, and what better way to assure access to the high-and-mighty than with cash at campaign time? Should a lobbyist forget that fact of life in Washington, there are always those politicians who will remind him, and none too subtly, by holding receptions to raise campaign funds.

Some of our less bashful public servants will ask lobbyists for money outright--without offering so much as an iced tea and cookie in return. There was nothing subtle, for example, about a voice message from one of Sen. Lincoln's congressional colleagues, the Hon. Eleanor Holmes Norton, official delegate of the District of Columbia to the U.S. House of Representatives.

Ms. Norton's message surfaced the other day in the ever vigilant Weekly Standard, which printed a transcript of her sales pitch verbatim, complete with stops and starts and pauses. The full text provides an invaluable insight into how our public "servants" do business in the nation's capital, principally for their own benefit. As a public servant, the delegate from Washington, D.C., makes a fine schnorrer. Just listen to the exact message the Hon. Ms. Norton left for that lobbyist and mark:

"This is, uh, Eleanor Norton. Congresswoman Eleanor Holmes Norton. Uh, I noticed that you have given to, uh, other colleagues on the Transportation and Infrastructure Committee. I am a, um, senior member, a 20-year veteran and am chair of the subcommittee on Economic Development, Public Buildings and Emergency Management. I'm handling the largest economic development project in the United States now, the Homeland Security Compound of three buildings being built on the, uh, old St. Elizabeth's hospital site in the District of Columbia along with, uh, 15 other, uh, sites here for, that are part of the stimulus.

"I was, frankly, uh, uh, surprised to see that we don't have a record, so far as I can tell, of your having given to me despite my uh, long and deep, uh, work. In fact, it's been my major work, uh, on the committee and subcommittee it's been essentially in your sector. I am, I'm simply candidly calling to ask for a contribution. As the senior member of the um, committee and a subcommittee chair, we have (chuckles) obligations to raise, uh, funds. And, I think it must have been me who hasn't, frankly, uh, done my homework to ask for a contribution earlier. So I'm trying to make up for it by asking for one now, when we particularly, uh, need, uh, contributions, particularly those of us who have the seniority and chairmanships and are in a position to raise the funds.

I particularly liked the part about "those of us who have the seniority and chairmanships and are in a position to raise the funds." Delegate Norton didn't bother with subtleties about controlling a pipeline of benefits. She had the candor to come right out with it: Send me your money and, uh, here's right where to mail it.

The "honorable" delegate from D.C. may not have a vote in the House (thank goodness) but chutzpah she's got. A surplus of it, to judge by this voice message. By the time she's finished using her position to raise campaign funds, she, uh, should also have plenty of money to spend this fall. (Chuckle.) Much like Blanche Lincoln, who also knows a thing or two about how to raise money. Lots of it.

Want to know why so many Americans are mad as hell and not taking it any more? If you're one of the few left who wonder what all those folks at Tea Party rallies are so exercised about, or why Politician has become a term of less than endearment in the American vocabulary, or why so many of us want the In-Crowd in Washington out, or why so many voters seem bound and determined to throw the rascals out this election cycle, even if only to elect new ones ... all you need do is hear Blanche Lincoln talk about using her high office as a "pipeline" into the federal Treasury for our benefit here in Arkansas. As if she could buy our votes -- with our own money. And maybe she can. It's been done before.