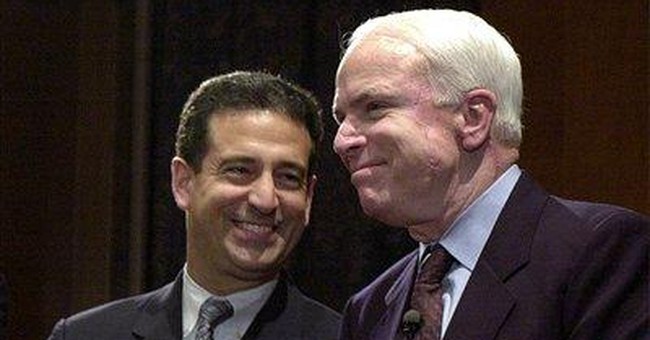 These days you don't have to believe anything in particular about race to be called a racist, for it's now used as just a general term of invective. Much as "Fascist!" or "Communist!" used to be all-purpose epithets for separate but equally uncreative types. To render a word meaningless, it is necessary only to use it promiscuously. It will soon lose its power.

When such terms lose their sting, others are needed to take their place. So another had to be invented to carry the opprobrium that Racist once did: Culturally Incompetent.

Here in Arkansas, a judge who doubles as a demagogue when he tires of his day job -- the Hon. Wendell Griffen -- used the phrase not long ago to criticize the state's governor, Mike Beebe. It seems the governor had appointed a white instead of a black candidate to the state Supreme Court, and a white male at that. What a brazen violation of political correctness.

This was proof he was "culturally incompetent," according to Judge Griffen. Cultural Incompetence is the new, upgraded Racism; it has the advantage of sounding so much more scientific than mere racism.

So now those who do not discriminate on the basis of race, creed, class or sex, but just pick the appointee they consider best qualified regardless of race are called Culturally Incompetent. The phrase has an almost medical sound about it -- as if it were a diagnosis rather than an insult.

It is a rare moment when you're present at the creation of a new political slur. Catch phrases in politics tend to multiply in such numbers, like barnacles, that no one may be able to identify the precise moment when the first one attached itself to the ship of state. It's all you can do to just try to scrape them off.

A new pseudo-science dubbed Cultural Competence is springing up on the nation's campuses, especially in its departments and schools of education, where an inflated vocabulary long has been used to cover a multitude of ills -- from Social Promotion to Self-Esteem. This concept will soon enough filter down to state departments of education and local school districts. The way Diversity did. And like Diversity, it will soon enough become an industry complete with experts, consultants and subsidies from government and the larger corporations.

Racism is just back under a different name, and a different race is to benefit. But the essence of the swindle remains the same: Individual merit doesn't matter. Group identity is all. In the grand tradition of Affirmative Action, racial discrimination is now to be practiced under a sanitized name.

Here is how it's done at the University of Minnesota, where a Race, Culture, Class, and Gender Task Group has been organized. (The longer and more pretentious the names of these outfits, the easier it is to hide discrimination on behalf of the favored race, culture, class or gender.)

In keeping with current bureaucratic usage, committees are now dubbed Task Forces or something equally grandiose. This one acknowledges that "cultural competence remains hard to define and that current definitions lack consensus," but that may be an advantage. The wispier the ends, the easier to justify unsavory means. Like discrimination on the basis of race, sex or class. That's not simple prejudice any more; it's Cultural Competence.

The more racism changes, the more it remains the same underneath. Teaching "cultural competence" isn't education at all, of course, but indoctrination. As with any totalitarian program, the very meaning of words becomes expendable, even reversible. George Orwell would understand.

Discrimination on the basis of race or class or sex now becomes a good thing, a sign of enlightenment and Social Justice. A fog of multisyllabic words is spread over the whole agenda, the better to make it sound avant-garde. Nothing hides bad ideas like covering them with pretentious phrases out of a bad sociology textbook -- like white privilege, hegemonic masculinity, heteronormativity, internalized oppression ... and now cultural incompetence.

Whoever dreams up these phrases must have a lot of time on his hands, and probably a state job. Ever since Marxism went out of fashion, the fabricators of such industrial-strength phraseology have had to find new realms to confuse with their mumbo-jumbo, and the field of education was a natural, having already been confused beyond belief.

What we have here is a kind of intellectualized Ponzi scheme: The suckers are baited by a quick payoff in the form of the cheap, transient satisfaction that goes with despising those of another class, race or political persuasion. Only those who run this indoctrination program may profit by it, perhaps as the holder of an endowed chair at one of the more prestigious universities. Or maybe as a nationally known pulpiteer in the mode of the Rev. Jeremiah Wright of a Chicago megachurch. Mouthing the cliches of Cultural Competence can add up to big bucks.

As for those who resist this kind of doubletalk, and hold fast to the once plain meaning of words like culture and competence, they're sure to be denounced as Culturally Incompetent. Which is what the Hon. Wendell Griffen called the Arkansas governor. This isn't political discourse so much as name-calling. Using two-dollar names.