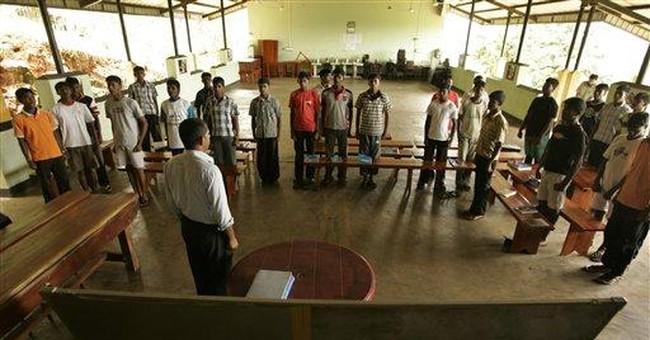 One of the brighter spots in the Obama administration is the country's new secretary of education, Arne Duncan, who may actually be interested in education -- as opposed to educational administration, bureaucracy, grantsmanship and all the other substitutes that have taken the place of actual learning in American schools.

Whatever he may achieve, Mr. Duncan shows a talent for diagnosing the problem, whether he's putting in a good word for charter schools -- even if his boss has just nixed a voucher program for those who most need it in the nation's capital -- or stressing the need for better teachers.

This time he's put his finger on what may be the source of American education's mediocre or worse performance: Our schools and departments of "education." They're the source of so much of the educanto that has covered the whole subject of education in this country with a thick patina of pseudo-scientific malarkey and fad-a-day theories. No wonder an aging bomber but still ideologue like Bill Ayers has thrived in a college faculty of education up there in Chicago. The way mold does in rotten timbers.

Secretary Duncan says he's been talking to hundreds of bright young teachers, who are the nation's real hope in education, and what he's found is that "most of them say they did not get the hands-on teacher training about managing the classroom that they needed, especially for high-needs students."

To fill that need is going to take a lot more than an annual mickeymouse class at some department of education. Or even promising innovations like KIPP academies and Teach For America, hopeful and impressive as such innovations have been. Real, basic, meaningful reform is going to take a revolution in the way American schools train the teachers of the future.

Secretary Duncan talks a good game. For instance, he says the administration is using part of its stimulus package to reward states that connect data on student achievement to the schools of education their teachers attended. Interesting. At least to the kind of researchers who think improving education is just a matter of graphs and numbers.

But how is student achievement defined? Only by test scores or something less definite and therefore less easily determined? Is student achievement just one factor out of many in determining where all that stimulus money will go? Or is this just another example of pork barrel spending to no clear purpose? Is it even possible in many states to link the schools that teachers attend to how well their students are doing?

Wouldn't it be simpler to just lift the caps that too many states now place on the creation of charter schools, reward those whose students are making marked progress, and close down the others? Or would that be unspeakably sensible?

All these games with numbers may only obscure the basic change that needs to be made in the education of American teachers: If teaching is ever to become a real profession instead of just another union membership, those in it should be prepared the way other professionals are. They should receive a thorough education, the real kind, in the arts and sciences before getting specialized training in their field, the way our physicians, lawyers and MBAs do.

What we see in teaching today is what one would expect if our doctors only had to major in medicine, filling in the rest of their curriculum with electives, and then were allowed to hang up their shingles once they had their undergraduate degree. A frightening prospect. Americans wouldn't put up with that, or at least let's hope they wouldn't. Surely the medical profession wouldn't. It knows better.

Yet we're turning over our most valuable national treasure, our young, to "professionals" who may have only an undergraduate degree, and that in a less than demanding curriculum. One of the reasons special programs geared to make teachers out of older, experienced adults aren't always successful is that many of these older students, especially the more intelligent or energetic, just can't take all the make-work courses required to become a certified teacher.

Like other professionals, the real kind, our teachers should get a well-rounded liberal education before they enter professional schools of education, where they would proceed not just to study child development but serve as interns and residents before being let loose in a classroom.

Talk about a revolution, such an approach -- already being pioneered by the best colleges -- would remake attitudes and goals in American education. And raise the level of respect that Americans ought to have for it. Not to mention the salary structure of teachers.

This Rx for American education is scarcely new. The diagnosis, prognosis and treatment of the problem was thoroughly mapped out decades ago, about the time Americans began to notice that Johnny couldn't read. Especially if Johnny came from a poor and/or broken family, not to mention a poor and broken community. Recommended reading, if only you can find a copy still in print: "The Miseducation of American Teachers" by James D. Koerner, copyright 1963.

Arne Duncan has his work cut out for him. So have we all. The education of teachers is no simple or instant thing. Any more than education itself is. Revolutionizing the education of American teachers will be a long and daunting task -- but it won't get any easier if we keep putting it off.