Obama At the Plate 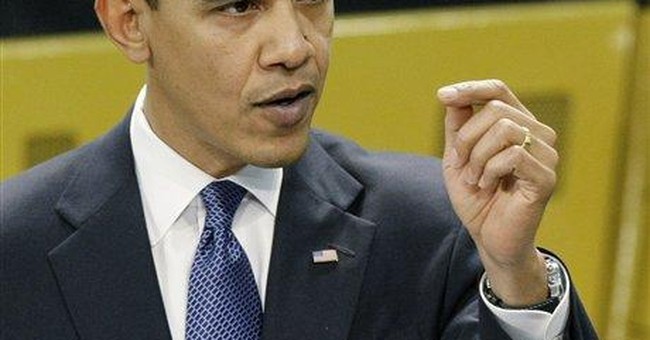 Believe or disbelieve our new young president, trust or distrust him, agree or disagree with him, he is a remarkably persuasive advocate. As he demonstrated his first time up at a presidential press conference.

Maybe it's only because I've been re-reading John Updike's classic baseball piece ("Hub Fans Bid Kid Adieu"), but while watching Barack Obama in action at the political equivalent of a season opener, I kept thinking about Ted Williams. There is the same cool competence, focused concentration, air of professional detachment, and complete mastery of the basics. In short, a natural talent assiduously developed.

It's been clear for some time that Barack Obama knows every technique in the debater's handbook, and he must have used most of them during the course of that first White House press conference:

There was the dubious revisionist history rolled out ever so casually, as if it were accepted fact (tax cuts don't work); the assumption that any fault lies not in us but elsewhere (usually with the Bush administration or those primitive Republicans in general); the dubious dichotomy (the stubborn, do-nothing opposition vs. us perfectly reasonable types willing to compromise, i.e., Democrats) and a host of suspect assertions tossed off with the calm conviction of "a Christian holding four aces."

The phrase is Mark Twain's, the imperturbable manner is Barack Obama's. The man can say the most unbelievable things in the most matter-of-fact way, for example, his claim that there's "not a single pet project" in his stimulus bill.

OK, one man's pork barrel spending is another's economic stimulus, but this horse-choker of a bill was laden with so much lard it's a wonder the pages didn't stick together. It almost oinks.

The president is right: This proposal of his didn't contain a single pet project. It contained many. To cite only some of the glaring examples: $2 billion for a clean-coal power plant with the exact specifications of one long desired by the good citizens of Mattoon, Ill.; $2 billion to produce batteries for hybrid cars; $4.2 billion for "neighborhood stabilization activities" that ACORN, an outfit that might as well have been an arm of the Obama campaign last fall, or vice versa, would be highly eligible for and even more likely to get; $650 million for more digital TV coupons; $600 million for new cars for federal workers; $50 million for the National Endowment for the Arts; $6 billion for colleges and universities, many of which already enjoy billion-dollar endowments; plus more billions to bail out state governments that have overspent on a reckless scale....

Whatever the merits of these projects, or the demerits, you can be sure each is somebody's pet, and that the somebody in question has managed to slip it into this something-for-every-interest grab bag of a bill. But who you gonna believe, our engaging young leader or your lyin' eyes?

By the time his stellar performance was done Monday night, it was clear that the Republican minority in the Senate was no more going to thwart Our Hero's game plan than the Green Monster ever deterred Ted Williams.

Even more impressive than what our eloquent, elegant president said was what he didn't say. While plugging health-care reform (who'd be against that?), he found no need to mention the sleeper clause that extends the reach of the country's chief medical second-guesser -- excuse me, the National Coordinator of Health Information Technology. So that said bureaucrat can better look over the shoulder of every private physician in the country, or maybe even jiggle your doctor's elbow from time to time, thanks to the modern miracle of computerized medical record keeping.

Is this just a technological fix, the beginning of Hillarycare Part B, or the first tentative tentacle of a general stealth initiative to socialize, nationalize and/or further complicate this country's already broken health-care "system"? Or all the above?

The answer will doubtless arrive soon enough, like the next utterly screwed-up bill from your friendly neighborhood Health Care Provider. But some of us are still waiting for the answer to the obvious question: What th' heck is this bill about further government regulation of the medical profession doing in an economic-stimulus bill?

Who knows how many needles great and small have been hidden in this gigantic haystack of a proposal? Eventually we'll find out, but it'll be too late then. But why bring up such fussy details and risk spoiling the silken delivery of the talented Mr. Obama, the utterly focused new star of our real national pastime -- politics? Just sit back, relax, and be swept up in admiration. Let the games, and spending, begin.