Identity Theft: The Case of the Talented Mr. Biden 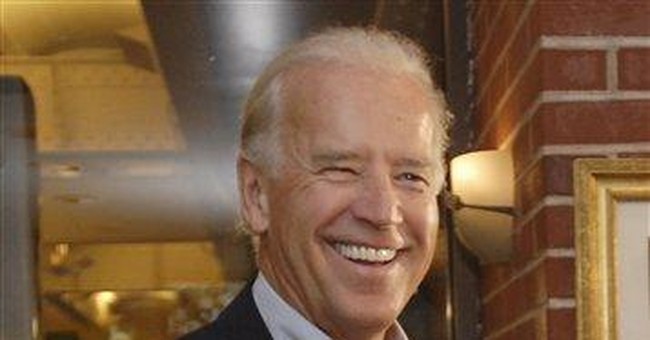 Barack Obama's beautifully choreographed campaign, from the stunning debut in Iowa to the cheering masses in Berlin, may have just made its fatal error, and its name is Joseph Robinette Biden Jr., a U.S. senator from Delaware. Even though he once confused himself with The Hon. Neil Kinnock, MP.

It seems Lord Kinnock's rags-to-power story so entranced a younger Sen. Biden that he, uh, borrowed the Welshman's words (and whole speaking style) during his first bust of a presidential campaign in 1988.

That outing fizzled, like Sen. Biden's presidential campaign this year, but this time he's won one heck of a consolation prize: Barack Obama's nod for second place on the Democratic ticket. Congratulations, Sen. Biden. God help you, Sen. Obama. For there's nothing like a presidential - and vice presidential - campaign to expose every embarrassing detail of a candidate's life. Including any alter egos he's developed along the way.

Have we ever had an admitted plagiarist as a vice president? Well, it could be argued, though not very convincingly, that every politician prominent enough to have a speechwriter, or even a whole stable of them, is taking credit for somebody else's words. But that's no longer scandalous; it's common practice, and the speechwriters - far from considering themselves victims - may be flattered that theirs are the words The Candidate chooses to use.

One president - Franklin Roosevelt - was so proud of his speechwriters' words that he went to great lengths to leave the impression for future historians that he himself had written them, laboriously copying his First Inaugural over in his own hand. The only thing he had to fear was Š that his speechwriters would get credit for their own words.

Every writer, even a writer manque like a journalist, can well understand the temptations of plagiarism, as in the phrase that occurs to some of us almost automatically when we read some rare piece of well-turned commentary: "Gosh, I wish I'd written that!" What disturbed about Joe Biden in 1988 was that he didn't just steal Lord Kinnock's words but the Briton's whole life story.

There's a point at which plagiarism stops being scandalous and becomes just pitiable, and Joe Biden passed it 20 years ago. How sad. The self has become an equivocal commodity in the modern age, but can you think of another politician who's appropriated not just another's words but his life?

It's not as if this were the only case in which the talented Mr. Biden played a double role. With him, it's a pattern. He's such a talented shmoozer/glad-hander/salesman that he may actually believe what he's telling you at the time before turning around and stabbing you in the back. Recommended reading: Clarence Thomas' memoir, "My Grandfather's Son," specifically pages 235-36.

That's where Justice Thomas recounts how Sen. Biden, having promised him a fair hearing before the Senate Judiciary Committee, turned around, right off the bat, and quoted him blatantly out of context. "The point I'd been making," as Justice Thomas recalled, "was the opposite of the one that Sen. Biden claimed I had made."

This may be standard operating procedure in Washington's poisonous political atmosphere, the one Barack Obama has so often promised to change rather than perpetuate, but not for men with a sense of self, which Clarence Thomas certainly has. Thanks in large part to his grandfather - the stern, loving, devoted, grandfather who raised him.

And now Joe Biden has been assigned the vice presidential candidate's traditional role as hatchet man. He'll be smooth as silk, nice as pie, at it. Just as he was to Clarence Thomas. Not just before but after plunging the knife in. For after Sen. Biden had sandbagged Clarence Thomas, he assured the nominee that he would defend him in the future, at least on a couple of disputed points. "Judge, I know you don't believe me," he replied, "but if any of these last two matters come up, I will be your biggest defender."

Clarence Thomas's conclusion: "He was right about one thing: I didn't believe him."

Now the question is whether the American people should believe Joe Biden. This is supposed to be a man of rare judgment, according to Barack Obama, who used to stress judgment at the beginning of this campaign. Now he has chosen as his running-mate a "foreign policy expert" who opposed the first Gulf War, a diplomatic and military triumph, but supported the current war in Iraq, at least till it turned into a long travail. Only then did he suggest giving up and vivisecting Iraq - into three separate countries. At least.

Now the Surge has turned things completely around. Yet it hasn't been a year since Sen. Biden was dissing General David Petraeus's strategy in Iraq, which will go down in the annals of counter-insurgency warfare as a model to follow. To quote Sen. Biden's words to Tim Russert last September on what turned out to be the general's highly successful strategy:

"I think he's dead flat wrong. The fact of the matter is that there is - that this idea of these security gains we've made have had no impact on the underlying sectarian dynamic. None. None whatsoever." Despite Joe Biden's confident prediction that we would see an American humiliation in Baghdad akin to the last days of Saigon in Vietnam, we stand in the presence of an unacknowledged (at least at the Democratic National Convention) victory. And this is Barack Obama's idea of a man of judgment.

Just as Barack Obama is Joe Biden's idea of a clean, articulate candidate even if he is black. That was the gist of one of Sen. Biden's more idiotic comments during his brief but excruciating presidential campaign this year. And he seems to have meant it as a compliment. (One problem with talking all the time is that the talker is likely to reveal some strange attitudes.)

In short, there are aspects of Joe Biden's biography - the real one, not the one he borrowed from Neil Kinnock - that disturb. But not nearly as much as Barack Obama's idea of a man of judgment.